HONDA CIVIC IS BACK TO ITS BEST 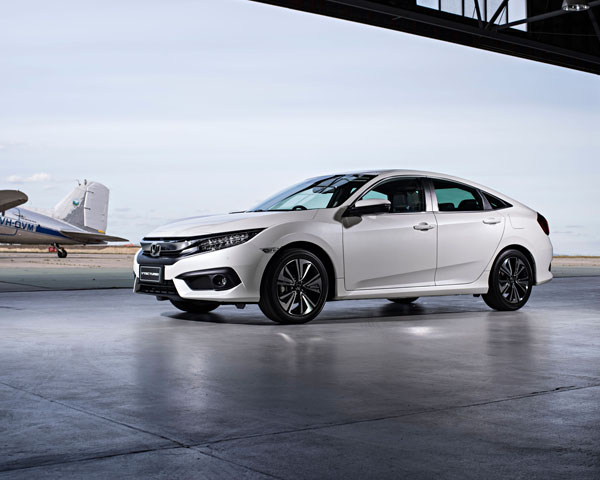 The arrival of the 10th generation, Civic in mid-2016 sparked a significant revival, with sales more than doubling in 2017, albeit from a relatively low base. The new Civic hatchback, always the biggest seller in Australia, went on sale until March 2017. Our test here is of the topline sedan, we will follow up with a hatchback soon.

Unlike the previous Civic model where hatches were built in Britain and sedans in Thailand, all Australian Gen-10 Honda Civics now come from a new Honda factory in Thailand.

All are available as either a sedan or hatch with the exception of the Type-R which is hatch-only. We’ll concentrate on the standard variants in this review and get into the hot hatch at a later date.

STYLING
Both sedan and hatch have the coupe-like profile that’s clearly aimed at attracting younger and less conservative older buyers to the Honda brand.

The Honda family grille is flanked by narrow headlight clusters that sit above large honeycombed air intakes. Depending on the model, the headlights feature either sharp high-tech LED headlights or projector halogen bulbs. All models have LED daytime running lights at the upper edge of the headlights.

The entry-level Civic VTi sits on 16-inch steel wheels, all others step up to alloys, 16-inch in the VTi-S, 17s in the others. The Civic RS comes with an integrated body kit, including a gloss black grille, rear spoiler, sunroof and sportier wheels. 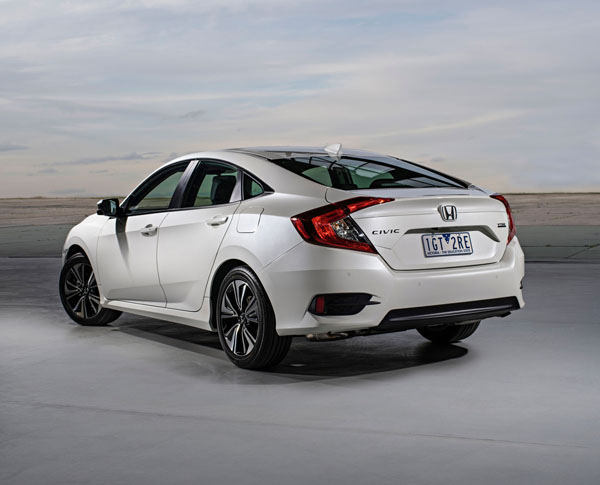 ENGINES / TRANSMISSIONS
Civic VT-i and VTi-S are powered by the well-established naturally-aspirated 1.8-litre inline four turning out 104 kW and 174 Nm.

The Civic VTi-L, RS and VTi-LX get an all-new 1.5-litre turbocharged twin-cam, direct-injected, four-cylinder with variable valve timing. It produces 127 kW of power and peak torque of 220 Nm between 1700 and 5500 rpm.

There is no manual gearbox with all models getting a CVT in place of the previous conventional five-speed automatic. The turbo-engined 1.5-litre variants also gets paddle shifters.

INFOTAINMENT
The dashboard display is a 7.0-inch colour touchscreen in all models but without any physical buttons for the more commonly-used functions such as audio and air conditioning controls. This can lead to a potential increase in driver inattention.

However, Apple CarPlay comes with Siri Eyes Free mode and Android Auto with Google Voice for hands-free operations. Both connect via USB cable rather than being wireless.

Bluetooth phone and audio streaming are also standard and there’s a two-tier smartphone tray at the bottom of the front console with a useful cable management opening.

The top-spec Civic VTi-LX gets dedicated Garmin satellite navigation with SUNA live traffic updates. All other models rely on smartphone links for navigation.

The standard 180-Watt audio system has eight speakers, while the RS and VTi-LX feature a 542-Watt premium audio with 12 speakers, including two satellite speakers, centre speaker and sub-woofer. Digital radio is available on VTi-L, RS and VTi-LX models. 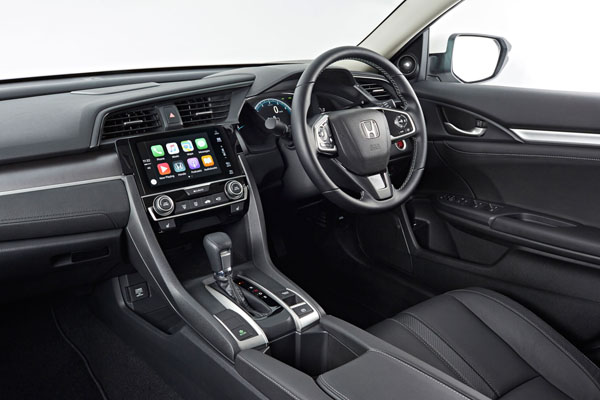 VTi-S and above get front and rear parking sensors as well as LaneWatch which uses a camera mounted at the rear of the left-hand mirror to provide an 80-degree view of the left lane when the left indicator is activated.

DRIVING
Our test car was the top-of-the-range Honda VTi-LX sedan which, with its raft of safety equipment at an affordable price, is likely to be the preferred choice for family buyers.

All-round visibility is excellent including the safety and convenience of narrow A-pillars.

The interior has an elegant look and feel with a high level of comfort. The front seats are well-proportioned and comfortable while the rears could easily pass for those in a car in the next size up.

The dashboard is logically designed with a tachometer and digital speedometer directly in front of the driver and a large infotainment touchscreen in the centre of the dash.

We love the instrument lighting that increases and decreases in brightness to reflect driving efficiency ranging from green through bluish-green and up to blue. Great way to become aware of the most fuel-efficient style of driving.

The new 1.5-litre turbocharged engine pulls strongly with little effort and contributes to a very pleasant environment to counter the hustle and bustle of urban driving. The quiet engine and underbody streamlining contribute to one of the quietest small cars that we’ve driven.

The CVT is well-matched to the engine with the option of paddle shifting for manual control if required.

A new generation of G-Design shift logic aids acceleration and has a more positive driving touch with reduced turbo lag.

On the open road Civic provides a balanced drive. It’s fun to drive and grips well through corners with steering that’s a little on the heavy side, just the way we like it.

Fuel consumption is officially listed at 6.0 litres per 100 kilometres on the combined city/highway drive. We averaged 7.4 L/100 km during our week behind the wheel.

SUMMING UP
The gen-ten Honda Civic looks great and has a refinement that compares favourably with some larger, more expensive, cars. There’s also a road presence that’s been lacking in recent Civics and we have no doubt it could cope with a long interstate trip.

Honda has joined the upward movement in standard warranties with coverage for five years and unlimited distance on all its models.