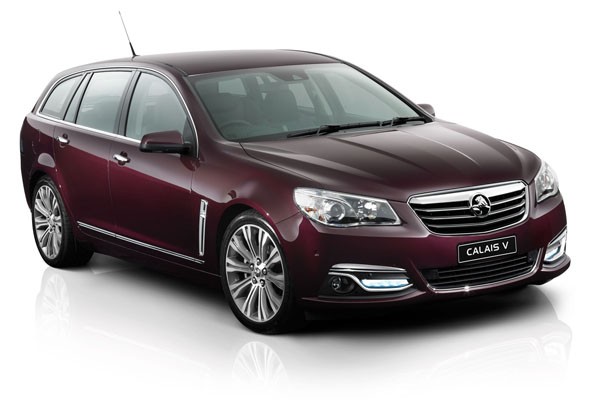 Holden’s VF family is testament to what can be done with not very much. Setting aside arguments about government support, this last hurrah was put together with the kind of money BMW spends designing a single dashboard. Well, not really, but it’s not far off.

The Calais V is the top of the tree for the ‘normal’ V6-propelled Commodore range. We snuck one out of Holden’s grasp and gave it the unenviable task of being the chase car on a photo shoot for a Lamborghini Huracan.

VALUE
Calais V is the priciest V6-powered Commodore variant. At $49,990, the Sportwagon is a $2000 premium over the sedan and $7200 more than the less-equipped, V-less Calais. 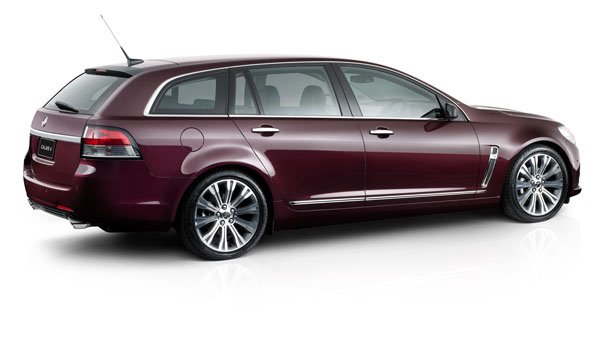 DESIGN
The VF is a fine looking machine to start with. The Sportwagon, despite dragging basically the same backside as the VE, looks terrific. It’s a slightly abbreviated, lifestyle wagon rather than the backyard-sized load bay of the old Falcon wagon, but still has a ton of space with the added bonus of extra rear headroom for loftier folk when compared with the sedan.

The Calais V is marked out by larger alloy wheels, some brightwork around the LED daytime running lights and foglight cluster as well as the various trim pieces on the guards, doors and boot. It’s reasonably subtle, to the point that it takes a bit of a car-spotter to know you’ve spent almost $50,000.

Front seat passengers get amazingly comfortable seats with suede inserts and very generous accommodation in all directions. The dash design has that mildly adventurous swathe of leather instead of just acres of plastic for the passenger to look at, and is ageing well.

The central stack is a little busy, housing the MyLink screen and some awkwardly angled buttons that don’t fall easily to the fingers. The buttons are a bit crowded in, too, but are easily learnt after a few days at the helm.

There’s plenty of storage about, with drink holders front and rear, good-sized door pockets, central console bin plus odds-and-ends storage, and somewhere to put your phone. The tailgate opens commendably high and the load area is square and easy to access. 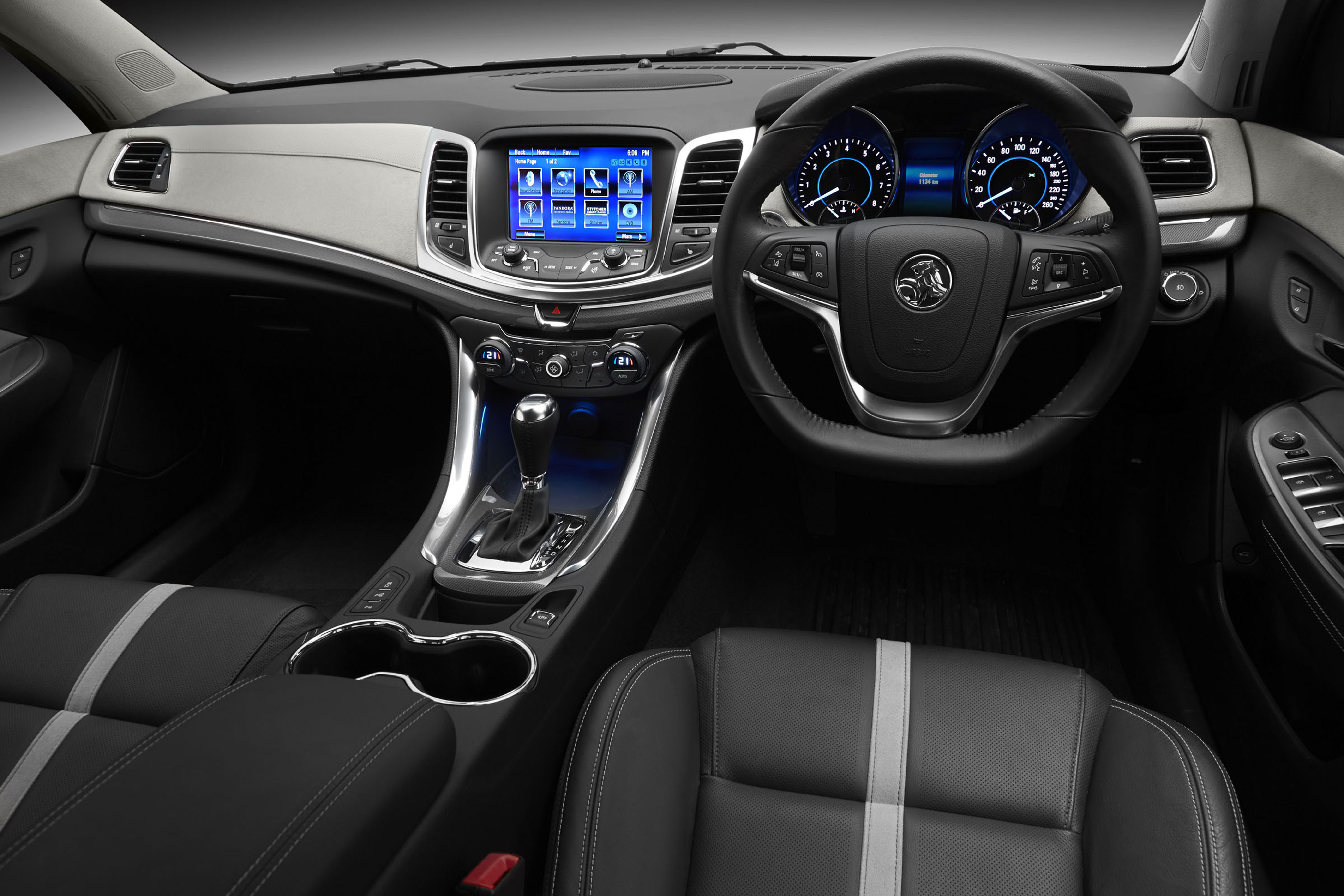 INFOTAINMENT
Holden’s MyLink is a very good system, but comes in two flavours. Annoyingly, the VF, doesn’t get the good version found in Trax, Barina and Colorado. Not to worry, because the problems are largely cosmetic. The touch screen is big and responsive with a good sat-nav display and the reversing camera is of a reasonable resolution.

As you might expect, you can Bluetooth or USB to the stereo and the set-up process is very easy. The only disappointment is the lowly speaker count, but many ears will be fine with the six on offer.

ENGINE / TRANSMISSION
The Calais is powered by Holden’s 3.6-litre V6, producing 210 kW and 350 Nm. It’s got everything a modern engine should – direct injection, twin camshafts and variable valve timing.

The transmission is a six-speed automatic delivering power to the rear wheels – as is only right and proper in a big sedan.

Holden claims combined fuel consumption of 9.3 litres per 100 km which isn’t especially frugal but it was a realistic number we were able to hit despite all the racing around.

The Calais V sprints to 100 km/h in under seven seconds, which is a mighty impressive feat with just six unassisted cylinders and an 1818 kg kerb weight.

DRIVING
Even without Holden’s sportier suspension, the Calais V is a lot of fun. It could be a bit of a wafting land-yacht – the quiet, composed nature of the engine could easily lull you into that sort of complacency – but when you give it a bit of a push, the chassis responds.

It does feel like the tail could get away from you and the steering is light but as you grow in confidence, you’ll find it’s all perfectly in hand. The front end can feel a little floaty but that’s mostly down to the electric steering which weights up with speed. The VF goes without a drive mode select system, so it’s a one-size-fits-all setup.

Passengers will find themselves very comfortable in the VF, with great space and comfortable seats as well as a lot of glass to keep the light coming. Vision for the driver is excellent in all directions except for the eternal VE-VF complaint of extra-wide windscreen pillars.

Whether you’re bashing about town or firing down the freeway, the VF Calais V is always quiet and composed, with little road or wind noise intruding. Some wagons suffer from a megaphone effect of the open cargo bay but the VF has successfully avoided that one.

One outstanding feature of the Calais V is the heads-up display. It is without doubt one of the best on the market, with a crisp projection, sensible graphics and a range of moods to suit your taste. It even has a G-force meter if you’re feeling frisky.

SUMMING UP 4.0/5
The Lamborghini wasn’t mentioned to make you jealous – well, maybe just a little bit – but it helps to give an unusual context to this report. We were in and out of a half million dollar car, built with all the might and resources of Lamborghini / Audi and not once did we feel short-changed when swapping into the VF.

You can buy ten Calais Vs for the price of one Huracan and yet you still have to pay extra for the Italian to have the reversing camera it desperately needs.

Obviously the drive is in another league, but it also brings home just what a comfortable, easy-going car the VF is and how good we’ve got it, for the next couple of years anyway.

While the VF is sadly Holden’s last gasp, it’s an advertisement to the rest of the world that you can build a car packed with advanced safety and tech toys without having to charge a fortune.

LIKES: Great chassis, refined, chock-full of stuff
DISLIKES: Could do with more torque,