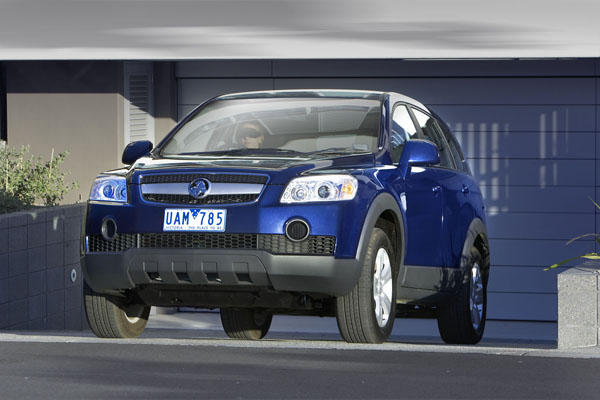 Holden Captiva is medium-large SUV class. Buyers tell us they chose it because of its good interior space after comparison with competitors such as Ford Territory and Toyota Kluger.

Sales were high virtually from day one, ironically as it turned out, because buyers liked what the saw as the security of the Holden brand so there are plenty of Captivas to choose from in the used-car scene. Take advantage of this by selecting from the multiple offerings to find a quality one that suits your needs.

Though it was imported from a GM South Korean factory the Captiva has extensive Australian input in its body styling and mechanicals.

Holden Captiva is offered with five and seven seats. The third row seats can carry adults in moderate comfort, but are better suited to kids than.

Storage space when all seven seats are in place is minimal, which is common in this class. Check for yourself by piling in possible travellers when doing your pre-purchase test drive. 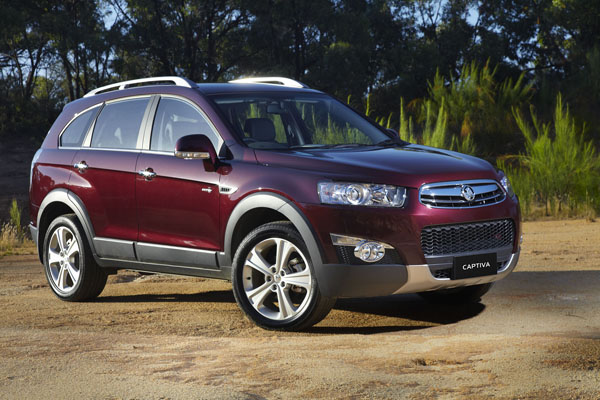 The rear seats can the folded down in various ways, when all are flat, you have a very useful 1565 litres of cargo space.

There are numerous small stowage compartments throughout the cabin. The large wet/dry area beneath the load compartment floor. Is an excellent idea.

Initially all Captivas had a part-time 4WD system, with drive normally being to the front wheels and the rear wheels being engaged when extra traction was demanded. Though the Captiva is not a heavy-duty 4WD it can go surprisingly far in the hands of an experienced operator.

A 2WD version, driven through the front wheels, was introduced in December 2009. Called the Captiva 5 and using the Maxx style body it’s a powered by a 2.4-litre four-cylinder petrol engine.

When introduced the only Captiva engine was a 3.2-litre V6 petrol built in Australia by Holden and a close cousin of the Commodore engine. A 2.0-litre diesel engine was added to the options list a few months later.

A five-speed automatic with manual overrides was the only transmission until the arrival of the Captiva 5, which is offered with a six-speed manual as well as the automatic transmission.

The automatics were upgraded to six forward ratios with the introduction of a facelifted Captiva in February 2011.

All models come with electronic stability control, ABS brakes with brake assist, traction control, active rollover protection and descent control. There are dual front airbags in all models with side curtain airbags optional in the lower cost models and standard on the others.

Captiva got a major makeover at the start of 2016, with an updated face, interior changes and added technology.

General Motors (GM) has announced its withdrawing from all right-hand-drives markets and assures us it will supply spares for up to ten years. However, it seems to be wavering on that promise.

At this stage dealers operate almost everywhere in Australia. Most will stock the more common spare parts for the Captiva. Other parts can usually be shipped in within a couple of working days.

Parts prices are often lower than average for an imported vehicle in this class.

Service and repair costs are reasonable and the relatively simple layout of the Captiva means the good amateur mechanic can do a fair bit of their own work. Safety related areas should only be carried out by professionals.

Insurance costs are reasonable and we haven’t seen a big variation between companies. However, it’s always smart to shop around for the best deal making sure that you’re comparing apples with apples when doing so.

Holden quietly took the Captiva from the Australian market during 2018.

WHAT TO LOOK FOR
Engines that are slow to start or blow smoke when worked hard may be due for major repairs.

Look for oil leaks under the engine and the transmission. Check the engine dipstick to be sure the oil level is significantly above the ‘low’ mark.

Automatic transmissions that don’t go into Drive quickly when moved from Neutral or Reverse may need servicing, or even major repairs.

Make sure that all warning lights are out after the engine’s been running for a few seconds.

Check for rust in the lower area of the body and in a Captiva that may have been used on the beach.

Look over the interior for signs of dirt having been ground into carpets. Similarly, check for damage and/or stains on the seats.

Look for off-road damage to the bumper corners, the door sills and for light scratches in the paintwork on the doors and the front guards.

If the load area has been used to cart heavy gear there could be damage to the panels and floor.

CAR BUYING TIP
When there’s bad news in the world in general car sales may be slow. It’s a good time to haggle for the best possible price.