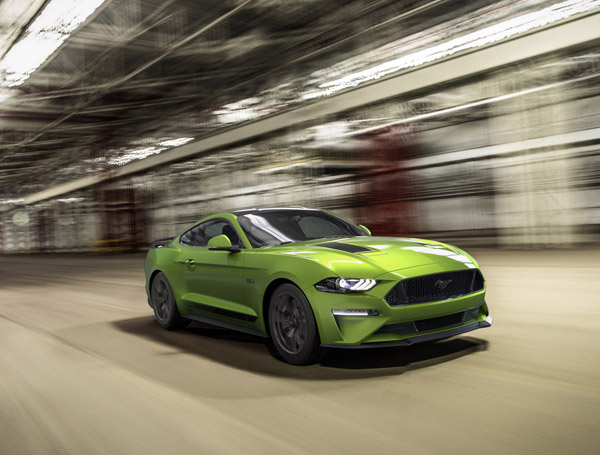 The MY2020 Ford Mustang GT specs and details have been announced by Ford Australia with new options and standout colours giving it plenty of appeal. As will a further expansion of the company’s Service Benefits program.

Mustang was re-introduced to Australia in December 2015, and has since become Australia’s most popular sportscar. Offered in Fastback and Convertible models, it has been the best-selling sportscar in Australia for 30 consecutive months.

The MY2020 Mustang GT Fastback will be offered with a new Black Shadow Pack that gives the Fastback model a unique look. The pack, exclusive to Fastback GT and priced at $1000, adds black painted roof, bonnet and side stripes, and grille Pony badging.

The optional High-Rise rear spoiler is also blackened when the Black Shadow Pack is selected.

Black 5.0L badging on the guards leave no doubt what’s under the bonnet. 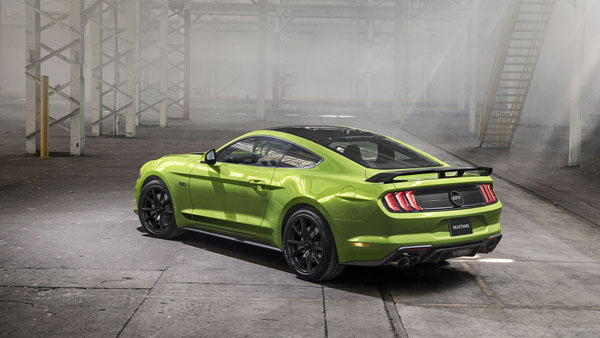 “The Black Shadow Pack takes the Mustang GT Fastback to another level,” said Mustang Chief Program Engineer, Carl Widmann. “It harks back to some of the graphic and decal packages that we’ve had in the past.”

There are four new colours, including Grabber Lime. ‘Grabber’ paintwork was first offered in North America on early 1970s Mustangs and is the inspiration for Grabber Lime.

A second heritage colour, Twister Orange, is also new for 2020, as is a fresh Iconic Silver, as well as the appropriately named Red Hot paintwork.

Forged 19-inch alloy wheel and Recaro seating options are likely to be chosen by many Mustang buyers.

On a slightly more mundane, but very important note, the Ford Service Benefits program now apples to Mustang owners. This includes the first four years/60,000km (whichever comes first), eligible customers will be able to service their MY2020 Mustang for a maximum recommended price of $299 (incl. GST) per A or B logbook service at participating dealerships.

The 2020 Ford Mustang will be on sale in Australian Ford Dealerships from November 2019, with pricing and further details to be announced closer to on-sale. It might be an idea to contact your favourite Ford dealer before then, as there’s likely to be rush – and it would be a shame if you didn’t have yours on your driveway in time for Christmas.