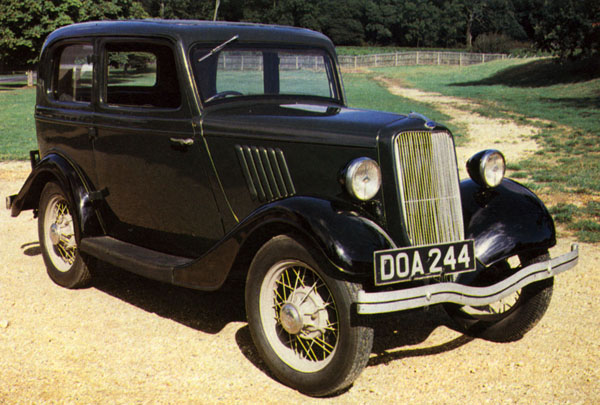 Whilst the Ford Model T established Ford as a dominant marque in America the Ford Model Y was the single model which launched Ford-UK on its way to market leadership.

This was Ford’s first really small car that, due to its cheap price, allowed it to open up Ford motoring to the masses. Before the 1930s, Ford-UK business was devoted to the assembly of American models such as the Model T and Model A. With the onset of the Depression in Europe Ford needed something smaller, cheaper and produced locally to sustain its business.

This was achieved with the Model Y which, although it was destined for production in Britain, was wholly engineered and styled entirely in the USA. In those days Ford ruled its world-wide empire from its head office at Dearborn, near Detroit in an extremely dictatorial way. Every component of the car including the chassis, the small side-valve engine and its style came out of the USA. The bloodlines of its design were still in evidence until the end of the 1950s with the Ford Anglia and Ford Prefect.

Over a period of 27 years, all the Ford cars in this family were based on the same simple chassis frame, with transverse leaf suspension on front and rear beam-axles, and with a version of the side-valve engine. Early model Y engines were 933 cc and rated at 17 kW while at the end of the period had grown to 1172 cc and 27 kW.

The two-door Tudor sedan was introduced from mid-1932 as a cheap and cheerful model which carved out a respectable slice of the small-engined UK car market. Previously this had been dominated by the Morris Minor and Austin Seven. The Model Y was so outstanding that when the Minor was renewed, it was replaced by a clone of the small Ford.

Four-door sedans were later added to the range and there were specials from outside coachbuilders. The Model Y was not particularly fast as it only had a three-speed gearbox and it had a habit of wandering from side to side on the road due to a flexing of its suspension but it provided unbeatable value and ample room for an entire family. During its first five years in production nearly 158,000 cars were produced before the restyled and somewhat larger Model C took over in 1937.