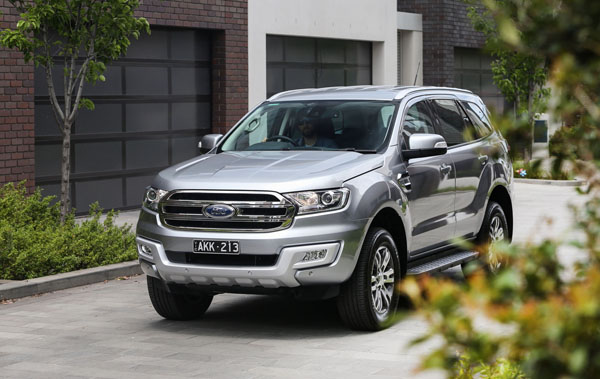 Ford Everest is a large SUV that has been built on the same platform as tough Ford
Ranger ute since the October 2015 model. It is a serious off-roader, unlike many in this
class that look tough but are relatively soft.

Everest is just under five metres long and over two metres wide so has a spacious cabin
capable of carrying up to seven occupants.

The entry-level Ambients have seating for five. Trend and Titanium models have the
rearmost pair of twin seats as standard. The second-row seats slide forward to make
access to the back row reasonably easy.

The Trend and Titanium have running boards, which makes for easier entry and exit, but
can be damaged during serious off-road conditions.

The second-row seats have a 60:40 split and the third row 50:50. With all seats in place
there is a reasonable 450 litres of storage space. Folding the third seats increases that to
1050 litres while with all five rear seats down it can carry up to 2010 litres.

All Everest models get dual-zone climate control. There are air conditioning controls at the
back of the centre console for rear passengers.

Everests are powered by Ford’s interesting 3.2-litre five-cylinder (yes, five cylinders!)
turbo-diesel Duratorq engine as used in the Ranger. It generates 147 kW (200hp) of power
at 3000 rpm and torque of 470 Nm from 1750 to 2500 revs. It’s not the quietest diesel
engine we’ve sat behind, but shouldn’t be an issue with a vehicle of this sort. 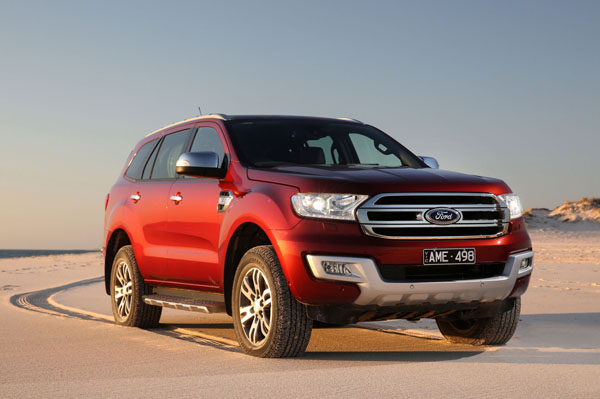 The engine sits in front of a six-speed automatic. It uses a tried-and-tested transfer-case
set-up and high- low-ratio gears. Which makes it a proper 4WD in the minds of the purists.

The control has hill descent control, which can be activated in any conditions. An
electronic locking rear differential helps prevent the rear wheels from spinning while driving
off-road, increasing traction in difficult terrain. It can be locked automatically when using
off-road TMS modes, or switched manually using the differential lock button.

All Everest models have an 8.0-inch colour touchscreen for infotainment system display
and control together with a 4.2-inch colour instrumentation screen for driving data. The
system uses Ford’s Sync3 connectivity system with Applink and enhanced voice control. It
syncs with both Apple CarPlay and Android Auto. 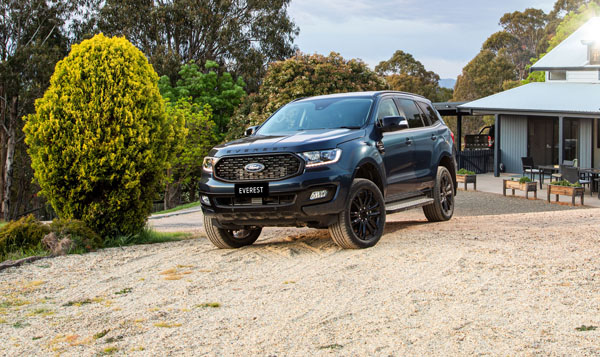 Ford has been a major player in Australia for almost 100 years and there are dealers in
most areas, even in the remote outback.

Some spare parts may not be stocked in all dealers but can usually be shipped out within
a few business days. Pricing is about average for this class of vehicle.

WHAT TO LOOK FOR
Given that it’s a serious 4WD more Everests are likely to have been used off-road than is
common in this class. Check for scratches on the body side and front bumper corners.

Muddy carpets can be another sign of off-road use, ask permission from the seller to lift
them to check underneath.

Check the interior for the sort of damage caused by children and by incorrect loading of
the luggage area.

Some owners have told us they’re getting false readings on the content of the AdBlue
tank. If so, it might be an idea to check with a Ford dealer, as the engine won’t start if the
AdBlue isn’t available. Ford dealers can recalibrate the system.

All changes in the automatic transmission should be smooth and all-but unfelt. For some
reason the change from fifth to sixth can be harsh at times.

The Everest was recalled to check the side air-bags were defective. Check this has been
done. Details of all recalls of this vehicle, and all others, are detailed in a separate section
of the feature.

CAR BUYING TIP
Buying a serious off roader? It might have been driven by people who have treated it
badly. A full inspection by a professional, ideally from Ford, is a must.