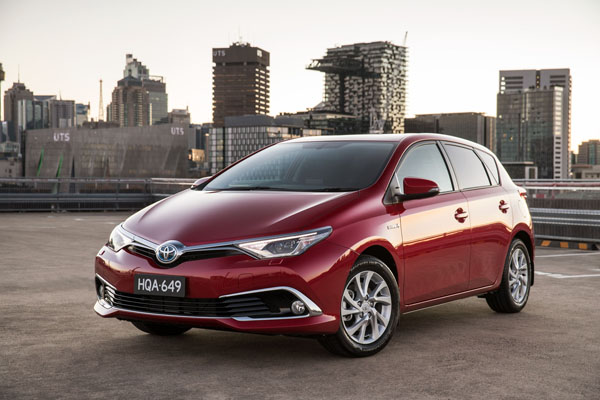 While other automobile manufacturers take varying roads to low emissions, Toyota is steadfastly sticking to the petrol / electric hybrid route with its new addition to the genre, the Corolla Hybrid.

With official fuel consumption put at 4.1 litres per 100 kilometres on the combined urban / highway cycle, this is good enough to give the vehicle a range of almost 1100 km depending on driving style.

The fifth hybrid in Toyota’s Australian line-up, joining Camry, Prius, Prius c and Prius v, the hybrid version of the popular Corolla arrives just months shy of the 50th anniversary of the launch of the first Corolla in Japan in October 1966.

With a comprehensive list of equipment, some not offered on other Corollas in Australia, the hybrid is priced from $26,990, putting it between the petrol-only SX and ZR hatches.

A steeply raked windscreen ensures the car slices through the air cleanly, which is then directed over a roof that slopes to a small spoiler. Rear light wraps around the corners giving the Corolla a broad stance from behind.

The car rolls on 16-inch alloy wheels with five sets of V-twin spokes. The car comes in any of the eight exterior paint colours available across the Corolla range. 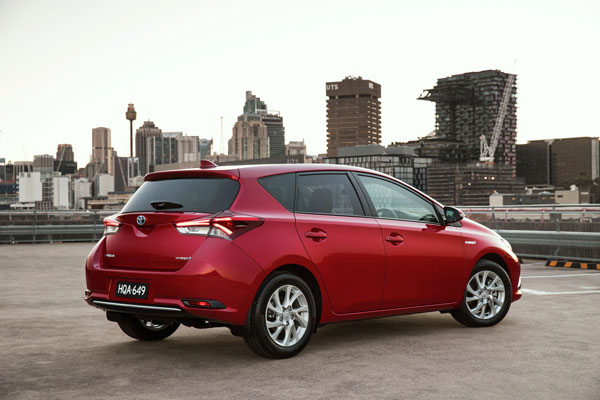 INTERIOR
The passenger cabin exhibits the premium materials and quality of a more expensive vehicle, with dark upholstery and soft-touch surfaces all round. Head room is adequate, shoulder space likewise but rear seat legroom is tight even with average-size occupants up front.

With the hybrid battery positioned under rear seat and temporary spare wheel under the floor, the latest Corolla retains the standard hatch’s 360 litres of luggage space. The rear seat backs fold flat for even more room.

INFOTAINMENT
A small 4.2-inch colour touchscreen is positioned just below air-con vents in the central dashboard area not quite at the driver’s eye level.

The screen displays clear full-colour maps for the standard navigation and is sued to operate the audio and Toyota Link connected mobility functions.

Air-conditioning controls are separate from the screen, positioned at the base of the centre stack.

The nickel-metal hydride battery, which puts out maximum power of 60 kW and top torque of 207 Nm, is charged by the petrol engine and regenerative braking. 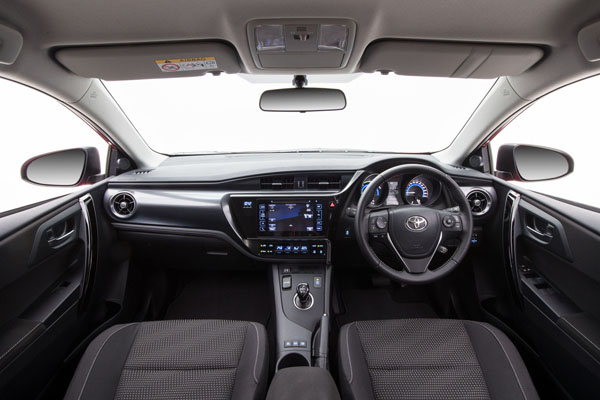 DRIVING
The first pleasant surprise about the Corolla Hybrid test vehicle was the keyless entry and petrol engine start. Hybrid power is all about efficiency in performance, economy and environmental protection.

During our period with the test car it clocked up fuel consumption of 4.6 litres per 100 kilometres on a mix of suburban and motorway driving, compared to the official figure of 4.1 litres per kilometre under similar conditions. That official fuel consumption of 4.1 litres compares with 6.1 litres per 100 kilometres for automatic Corolla pure petrol hatches. Toyota’s Hybrid Synergy Drive technology is capable of operating in petrol and electric modes alone, or a combination of both, depending on driving conditions. These are called into operation by buttons on the centre console.

Setting off under electric power alone is ponderous and needs the input of the petrol engine to push it along.

An Econometer in the instrument panel directly in front of the driver shows how the systems are working, with charge, economy and power on the dial helping the driver to maintain a desired result.
The independent rear suspension delivers stable ride and handling with a quietness and smooth operation that makes motoring enjoyable.

Continuously variable transmissions is operated via a neat mini-me shift lever on the centre console, the Corolla’s performance under normal driving is smooth and easy.

SUMMING UP
With 40,800 sales the Corolla retained its title as Australia’s best-selling car in the financial year ended June 30, making it the top seller in each of the past three calendar years. The Hybrid can only add to the success.