Citroen C4 Picasso, is a stunning-looking seven-seat people mover from the famed French marque that does things very much its own way. It first arrived in Australia in April 2007.

Although it’s not a mainstream model in Australia by any stretch of the imagination, those buyers who hate to be ordinary just love the Picasso.

Picasso’s seven seats are all individual buckets, in a two-three-two formation. The two front rows are suited to adults but the third-row pair may be a little claustrophobic for young occupants as they sit quite low in the car.

The rearmost seats can be folded down into the floor and the centre-row seats flip back to butt up against the front seats to make a completely flat luggage area. The resulting space is large and easy to use. 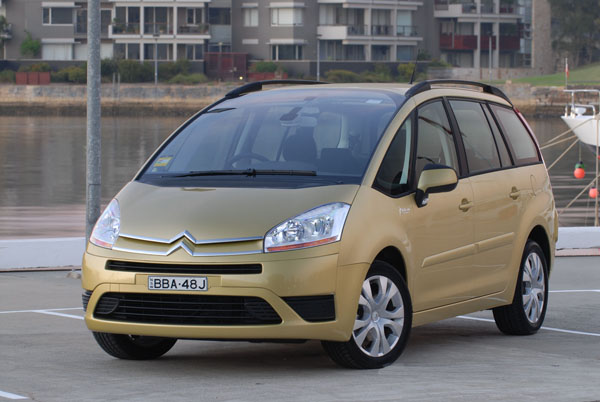 With all seats in use there’s not a lot of space for luggage and even mid-sized suitcases may not fit. This situation improved with the next generation (covered later in this review).

Some five-seat C4 Picassos were also sold but were never popular. Still, if you only want five seats and an owner is having trouble selling one you might score a good deal.

All instruments and controls are displayed on screens in the centre of the dashboard with nothing at all on the dash in front of the driver.

The big talking point with Citroen Picasso is the huge windscreen that’s almost as tall as it is wide. The view out is spectacular. Glare can be reduced by using the twin sliding sun visors that virtually extend from the roof forward to give the screen an almost conventional shape.

The first Picassos sold here had a 2.0-litre petrol engine mated to a four-speed automatic transmission, or a 2.0-litre turbo-diesel with a six-speed automatic. Owners praise the low fuel consumption of the diesel, quoting figure of just five to seven litres per hundred kilometres on easy runs. Though its uses 10 litres or more around town.

The diesel engine is reasonably refined, although there’s the usual diesel rattle, especially when the engine is cold. On the move it is much quieter from the inside of the Picasso.

Ride comfort is very good in the typical French manner, though rough roads can catch the Picasso out at times. There’s more body flex than we like on the really harsh stuff.

Handling is better than average for a people mover but it’s certainly no sports model. 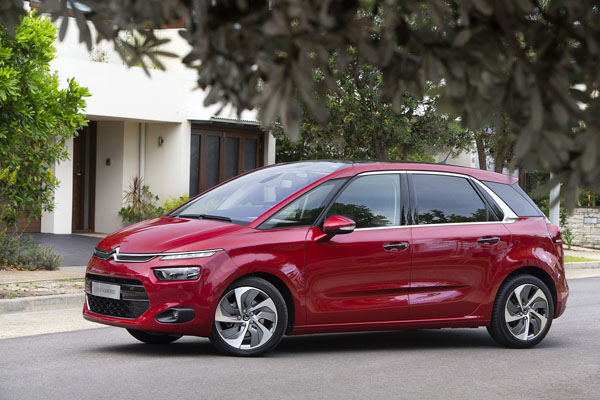 Among many fascinating features are fold-down tables in the rear of the front seats. And there are numerous voluminous storage areas.

Citroen Australia is proud of the fact the new 2.0-litre, four-cylinder, turbo-diesel was the first diesel to receive five stars in the Australian Green Vehicle Guide. This is an area normally populated only by electric, hybrid and very small cars.

Citroens are very much a specialised marque in Australia so there are only a few dealers. It might be an idea to see if there’s one close to you before committing to a Picasso. Those specialists that do cover them are often enthusiasts.

Insurance is higher than average for the people mover class in Australian but not outrageously so. It’s worth shopping around but be sure to do accurate comparisons.

WHAT TO LOOK FOR
It makes a lot of sense to have a Citroen qualified person give a full report on the Picasso.

Overseas reports say there have been some suspension problems, but we’ve yet to hear of these in this country. Listen for creaking noises from the rear.

Build quality could be better at times so look for interior items that don’t fit as well as they should.

Listen for squeaks and rattles during your test drive. It makes sense to find a roughish road for this, doesn’t need to be a dirt one.

The Citroen C4 Picasso carries lots of people and the little devils right at the back have ben know to damage upholstery.

Engines should start easily and the stop/start system, if fitted, should be all but unnoticed in operation.

CAR BUYING TIP
Buying something that’s well away from the mainstream? Do even more homework than usual to be sure you don’t take longterm risks.