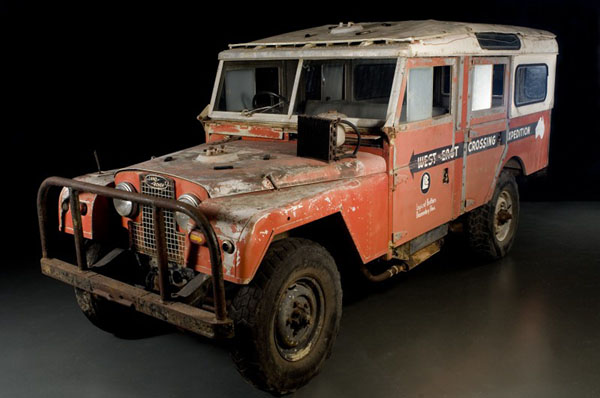 This 1958 Land Rover Series I will be on display at the upcoming Celebration of Four Wheel Driving at Birdwood.

Over 100 used and bruised 4×4 vehicles in full camp mode will be on display at Australia’s National Motor Museum’s grounds in Birdwood, South Australia. The one day event will be held on Sunday 19 May from 11am till 3pm. It’s part of the inaugural ARB and Battery World Celebration of Four-Wheel Driving.

“There will be so many people, vehicles and campsites – it will be like a major expedition is about to commence,” said Museum Director, Paul Rees. “Most of South Australia’s 4WD clubs will be represented and they’ll be getting into the spirit of things arriving on Saturday and setting up and staying overnight in Birdwood.

Visitors on Sunday will be able to see first- hand how authentic outback adventure set-ups look and operate and talk with club members,” said Rees.

“We’ve always been an outdoor nation,” said one of the organisers, Trevor Manning. “The growth in four-wheel driving and outback adventuring in Australia has been increasing for years, but it is rare for the 4WD community to get together in such numbers.

There will be some very special rigs and camps set up on site and I know that many of us 4WD enthusiasts will be eager to check each other’s rigs out as much as for those who will be visiting the Museum for the day,” said Manning.

Special guests at the event include:
• Helen Hamp, daughter of Tom Kruse the famous Birdsville Mailman,
• Kristin Weidenbach, author of ‘Mailman of the Birdsville Track’: the Story of Tom Kruse. As well as the popular children’s book, Tom the Outback Mailman,
• John Rooth aka ‘Roothy’ with his much loved 4X4 ‘Milo’, and
• Doug Sprigg, owner of Arkaroola Wilderness Sanctuary and Resort, who as a child was a passenger in the first 4WD to cross the Simpson Desert.

Activities on the day include live music on stage, cooking demonstrations, damper making lessons, campfire making, as well as other outdoor cooking techniques.

A raffle with prizes valued at over $8000 will be raising funds for the Royal Flying Doctors Service and Parkinsons SA.