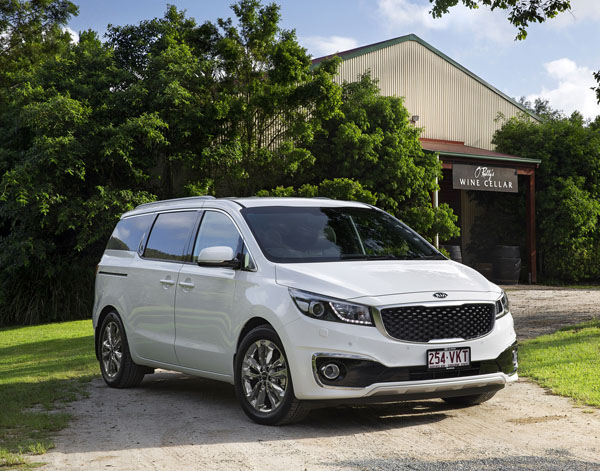 Living with the latest Kia Carnival finally put paid to the notion that people movers (also known as crossover utility vehicles these days) are vans with sparse seating, pokey windows down both sides and access to a take-it-or-leave-it luggage area through an ungainly back door.

The third generation Kia Carnival has just had a mid-cycle makeover that centres on comfort and safety upgrades.

The model range – Carnival S, Si, SLi and Platinum – stays the same. So do the petrol and turbo-diesel engines on offer.

However, the latter are mated with the latest eight-speed automatic transmission. Prices start at $42,490, plus on-road costs, for the Carnival S petrol model and top out at $62,790 for the turbo-diesel Platinum. On test was the SLi at $52,490.

STYLING
The Carnival’s svelte (for a people mover) appearance can be put down to a long wheelbase, at 3060 mm, trimmed height of 1755 mm with roof rails across the range, swept-back profile and long bonnet. 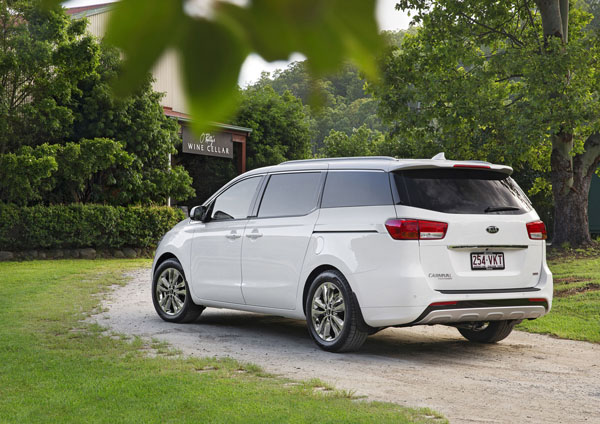 Styling cues are shared with the Sorento sports utility vehicle, including a revised tiger-nose grille, sleek headlamp clusters and lower air intake with integrated fog lights reinforcing the wide stance of the vehicle.

The latest version of the Carnival has a lower tailgate and the three-quarter panels have been given a light touch to add a stronger look from behind.

INTERIOR
The cabin has top quality materials, premium features and high-tech systems put together by the gals and guys at Kia’s California styling studio.

The two-tone interior features a high proportion of soft-touch materials, and in the Carnival SLi light and grey contrasting leather trim. Front and middle-row passengers enjoy individual seats and overhead consoles as in airliners.

Innovative ‘stand-up’ seats in the second row allow base cushions to fold forward, while the rest of the seat slides forward and rests vertically behind the front seat backs allowing passengers of up to Humpty-Dumpty proportions to settle in the third row.

This back row is able to fold completely flat. The centre seat in the second row can be removed totally or folded flat to offer additional cup holders for back row occupants.

A storage area under the front armrest is big enough for a laptop, there are two glove boxes. 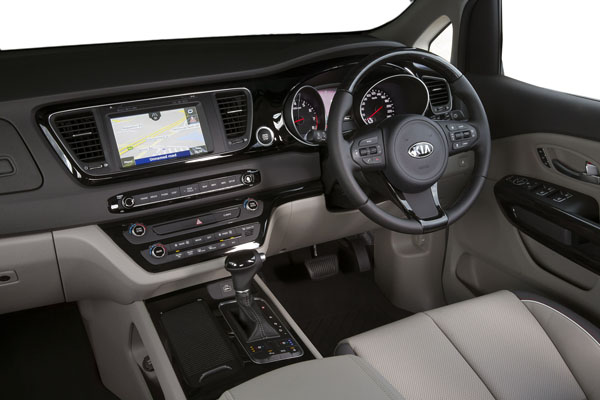 There is a convex ‘conversation mirror’ in the overhead console allowing the driver and front-seat passenger to see what’s going on behind them. Potentially dangerous if the driver uses it while the Carnival is moving, though…

Three-zone climate control air-conditioning allows for separate settings for front passenger and driver, while the second and third rows are serviced by their own system, which can be controlled from the second row.

ENGINES / TRANSMISSIONS
The 3.3-litre GDI (Gasoline Direct Injected) V6 engine of the SLi, mated with an eight-speed automatic transmission is good for maximum power of 206 kW at 6000 rpm and 336 Nm of torque at a very high 5200 rpm.

DRIVING
Interior space is generous and there was never a crowded feeling even when loaded up with family, friends and all their gear. The power tailgate was a boon when loading.

As with all Kia models coming Down Under, the Carnival ride and handling characteristics were fine tuned by local engineers to ensure the most suitable for Australian conditions.

Improved NVH came with the third-generation introduction and has maintained the high level of cabin quietness with the mid-cycle makeover.

Carnival puts power to the front wheels through an eight-speed automatic transmission, drivers can switch to sequential manual shifting.

Generally, in full automatic mode, downshifts were hardly noticeable, even with the engine under load.

Carnival likes a drink, our SLi went through more than 12 litres per 100 kilometres of petrol on a mix of town and country driving over the test time.

SUMMING UP
The upgraded version of the third generation Kia Carnival has serious competition from Toyota Tarago and Honda Odyssey but certainly holds its head high.

As with all Kia passenger vehicles, the seven-year, unlimited warranty is an added attraction.