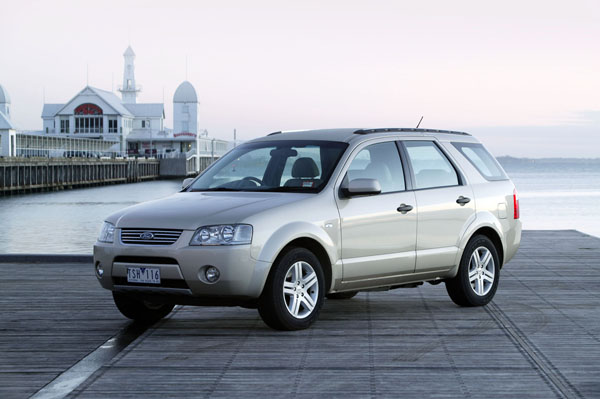 Ford Territory is a large SUV designed and built in Australia. Launched in May 2004 It was based on the Ford Falcon and shares some of its mechanical components however, many parts are unique to the big wagon.

Time was against it as Ford Oz was struggling in the sales race and didn’t have the budget to design an all-new Territory. Seven years after its introduction it did receive a major makeover in May 2011. As well as styling enhancements significant changes were made to rides and handling, with less body roll than the original. Handling was sharpened to the extent that the big SUV holds the road at speeds far higher than are likely to be attempted by average drivers. Noise and vibration damping was almost to sedan standards.

In December 2014 the Territory got a facelift. It also saw the introduction of a Ford’s in-car connectivity system, SYNC2, standard across the range, as well as WiFi hotspot and voice control smart technology.

But it was too late for Ford’s 10 year old SUV to compete with much newer imports and the last Territory was built in October 2016.

The big Ford wagons are holding their value well because serious users are aware that every other SUV sold in Australia is an overseas design. These may or may not (probably not) have been adapted to suit Australian driving conditions. 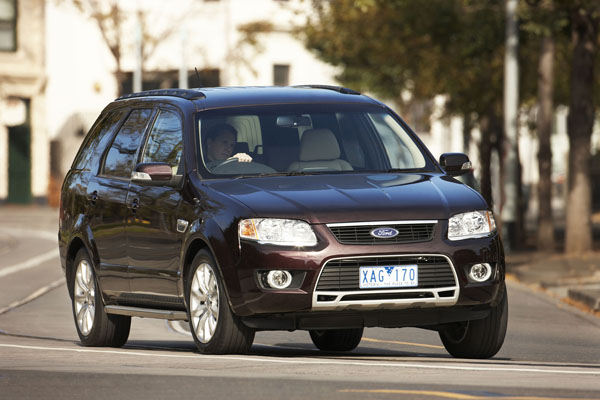 Ford Territory seating is for five or seven people according to the number of rows of seats. The third row of seats isn’t too bad for adults. A realistic passenger load is four adults and three children.

Luggage space with five seats is good, but with all seven seats in use there’s not a lot of room left – but that’s not unusual in this market segment.

This Ford SUV has precise handling for an off-road wagon and rides better than many European SUVs that cost considerably more.

Most Ford Territorys have Ford’s old-faithful straight-six 4.0-litre petrol engine, with a turbocharged version of this six being offered from July 2006. The engines are on the thirsty side, but were improved slightly over the years. The six-speed petrol autos are noticeably more economical than the four-speeders.

The long-overdue option of a turbo-diesel engine was introduced in the facelifted Territory of 2011. A 2.7-litre V6 it has used the latest technology in variable-vane turbos and high-pressure injection.

All Territorys have automatic transmissions, four-speed until October 2005, when a six-speed was introduced on the upmarket Ghia, but only in AWD format. The six-speed was gradually moved into other models, but it wasn’t until the 2011 makeover that it was finally used in all Territorys. The automatic six is the only transmission installed in the turbo-petrol and diesel powered Territorys.

Territory is sold with two-wheel-drive (to the rear wheels), or all-wheel drive (AWD). Electronic aids improve traction off-road in the Ford Territory 4WD variants. Hill-descent and hill-start assistance take much of the scariness out of extreme slopes.

Though there’s good underbonnet and under-vehicle access, this is a modern vehicle that’s complex in its mechanical components. So unless you are an expert it’s best to leave all but the simplest of maintenance to the trained mechanics.

Virtually every town of any significance has a Ford dealership, and many private garages will have a mechanic or two who was trained in a Ford workshop.

Spare parts for the Territory are generally favourably priced and as yet we haven’t heard of any recurring complaints about availability.

Insurance premiums are usually in the lower end of the scale and there doesn’t seem to be a big variance from company to company.

WHAT TO LOOK FOR
Territory is built to a reasonably high standard in Geelong. We do see the occasional problems so a professional inspection is recommended after you have done your own initial look over.

Take a Territory for a run on rough roads to see if there are any rattles or squeaks as cabin parts rub against one another. Even the 2WD models are sometimes used to explore bush tracks and the like.

Look at the condition of the body in case the Territory has been in off-road territory. Signs of the latter damage are generally at the bumper corners, the underneath of the door sills and on the underbody. Also look for tiny scratches in the body side where it has been squeezed through the undergrowth.

Make sure the automatic transmission doesn’t hold onto gears, or change gears too often when it really should be holding the one ratio.

Possible leaks at front brake hoses were the subject of a voluntary recall in March 2009. Check with a Ford dealer or the company’s head office to see if the work has been done.

Visually check the condition of the interior, including the luggage area. Off-road exploring with lots of gear and muddy people on board can result a mess, even trim damage.

CAR BUYING TIP
Off-roaders that go off-road are pretty rare, if you do come across one it might be best to skip it. Though if the price is right it may still have a place on your short list.