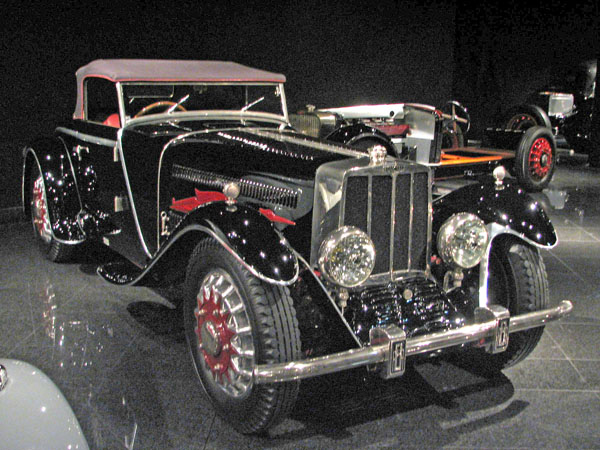 The Bucciali was a product of two young French brothers, Angelo and Paul-Albert Bucciali. Initially they became obsessed with the new sport of flying and Paul-Albert became a stunt pilot. When World War I started Paul-Albert joined one of France’s elite fighter squadrons and at the end of the war they became interested in making motor cars as did a number of other Frenchmen.

The Bucciali brothers’ first cars were more like cyclecars with two-cylinder two-stroke engines. They carried the name Buc but as only around 120 cars were produced during the years 1920 to 1926 the business was hardly a commercial success.

Toward the end of this period they became acquainted with the new technology of front-wheel drive, at the time a rather controversial method of driving a vehicle. Together with a Brazilian engineer they built a prototype Bucciali which they called TAV1. This coding stood for Traction Avant – the French for front-wheel drive.

The specifications for this car suggested that it was extremely advanced and when shown at the Paris Salon in 1926 it caused quite a sensation. Viewers, who were intrigued by the claims of so many new and complex features and wondered what a potential owner would do if any of them failed, need not have worried as the TAV1 displayed was incapable of running! Even the TAV2 which appeared at the following year’s show was never seen on the road.

The shortcomings in the drive department were corrected by the time the TAV8 first appeared. It was powered by a conventional 4.4-litre straight eight side-valve American Continental engine built by a company that supplied engines for the Bullnose Morris Cowley. To distract attention from the humble origins of the TAV8’s engine the Bucciali brothers dressed up the basic power unit with several polished aluminium castings and plates so as to give it the appearance of a specially produced and uniquely designed power plant.

Front wheel drive meant that the Bucciali sat very low to the road. The styling of this car, with its low set headlamps, was as avant-garde as its specifications, which included electrical operation of the front brakes and servo-assistance for the mechanical rear brakes.

In later years Bucciali built additional front-wheel drive cars. These included the TAV30 that had a 5.2-litre Lycoming straight eight engine developed from the TAV8. Several of these were produced and all ran satisfactorily. The TAV12 was a further variant that used a V-12 sleeve-valve engine as in the Voisin marque. This car was first exhibited in 1932 at the Paris Salon, the forerunner to the Paris Motor Show.

Even in the marque’s heyday there were few Bucciali cars ever on the road. The Bucciali brothers, two of life’s supreme optimists, boasted of producing a total of 38 cars in different models between 1926 and 1932. The reality seems to have been less than half this number.