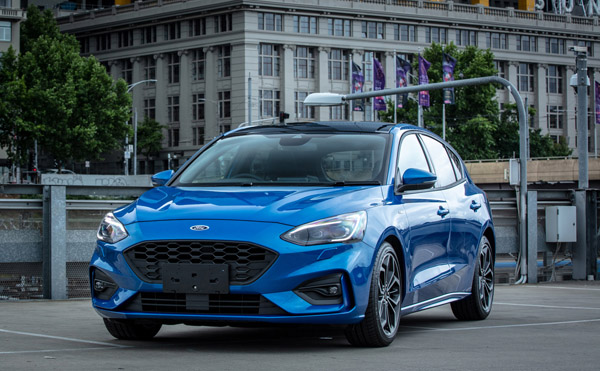 Ford Australia is looking at its latest, fourth-generation, Focus to boost the company’s flagging passenger car sales and ease pressure on the Ranger ute which currently accounts for around two-thirds of all Ford sales.

Launched here in December last year all new Focus models are built in Germany, previously lower-spec models came from Thailand. According to Ford it has been developed from the ground up.

Four model grades at offered: Trend, Active, ST-Line and Titanium. Body types are five-door hatch and station wagon, the latter only available with the S-Line specs. The high-performance ST and RS versions will follow next year.

Ford has bitten the bullet and discontinued the sedan version.

At this time there’s only one driveline, 1.5-litre turbo-petrol engine with eight-speed automatic transmission.

Our test car was the semi-sporty ST-Line hatch with its sportier suspension and a range of cosmetic enhancements including a flat-bottomed steering wheel.

STYLING
The Focus ST-Line replaces the previous Focus Sport and has a honeycomb grille, sporty side skirts and rear bumper capped with a chrome-finished twin tail-pipe. The hatch has an integrated boot-lid spoiler.

The ST-Line has sports suspension, a flat-bottom sports steering wheel with red-stitching, metallic pedals and wireless smartphone charging as standard. Its dual-zone climate control can be operated via voice activation. Add the optional Design Pack and you get LED headlights and 18-inch wheels. 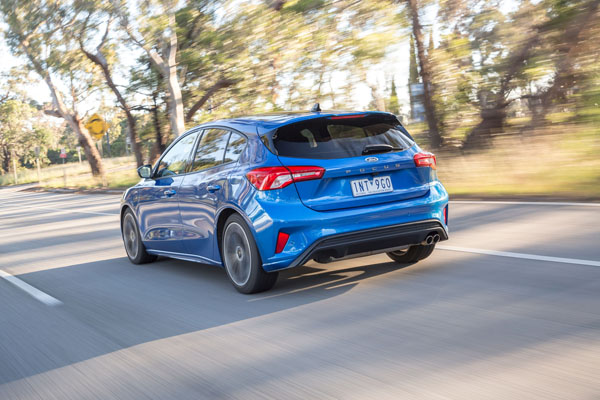 Ford Focus Titanium has leather upholstery and an LED Lighting Package that provides a broader headlight spread as well as automatic high-low beam. Camera-based dynamic bending enables the swivel of the light beam into the curve before the vehicle reaches it.

Rear seat space is impressive with plenty of leg and headroom although that’s offset by a relatively small 273 litres of boot space with all seats in place, extendable to 1320 litres with the rear seatbacks folded.

Post-Impact Braking (PIB), automatically apply the brakes after a collision to reduce the risk of rolling onto another vehicle.

Titanium also features Stop&Go Adaptive Cruise Control (ACC) with Evasive Steer Assist and Lane-Centering as standard. The ACC system helps the Focus maintain a comfortable driving distance from vehicles ahead, and with the addition of Stop&Go, has the ability to bring the vehicle to a complete stop. 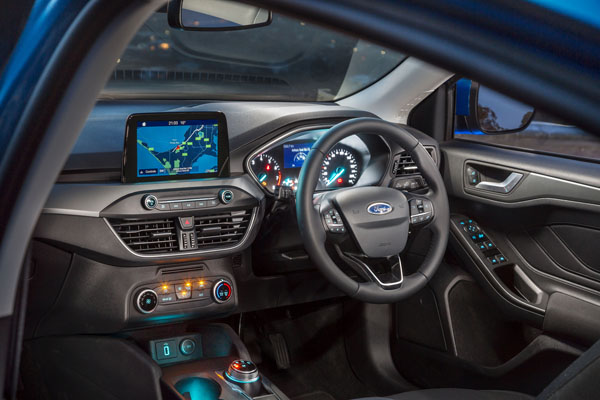 There are optional Driver Assistance Packages on Trend, Active and ST-Line that add features including Blind Spot Monitoring, Rear Cross Traffic Alert and Adaptive Criise Control. Check with your dealer for specific details.

For anxious parents Focus comes with the Ford MyKey system which allows the car to be programmed for younger drivers. This can inhibit incoming phone calls; restrict top speed; prevent deactivation of driver assistance and safety features; reduce audio system maximum volume, and disable the audio system altogether if occupants are not using seatbelts.

ENGINE / TRANSMISSION
In line with the growing trend Focus is powered by a new-design three-cylinder 1.5-litre EcoBoost (turbocharged petrol) engine developing 134 kW of power, and 240 Nm of torque from as low as 1600 rpm.

In motorway driving when torque demand is low one cylinder can be de-activated for greater fuel economy.

There’s no manual option, all models get an all-new eight-speed torque-converter automatic with a circular gear shifter in the centre console and steering wheel mounted paddles.

All models have alloy wheels: 16-inch on the Trend, 17s on the Active and ST-Line and 18-inch on Titanium. ST-Line and Active can be optioned up to 18-inch.

INFOTAINMENT
Ford’s SYNC3 infotainment system is standard across the Focus range. It uses a full-colour 8.0-inch touchscreen situated on top of the dashboard and comes with integrated satellite navigation with Traffic Message Channel and MapCare updates; Apple CarPlay and Android Auto, digital radio, WiFi Hot Sport. There’s also the safety and convenience of voice activation that’s been specifically developed to understand a variety of accents.

All models above the entry level Trend have wireless smartphone charging while the flagship Titanium gets a 675-watt 10-speaker B&O Play Premium Audio System including sub-woofer.

DRIVING
Focus has long been one of the most driveable cars in its class and the latest model certainly maintains that quality. Our test car was the semi-sporty ST-Line hatch with its sportier suspension and a range of cosmetic enhancements including a flat-bottomed steering wheel.

It’s a sharp and responsive performer with high torque that kicks in from just above idle and that distinctive burbling sound that you get from the better three-cylinder turbo engines.

Focus has an all-new body structure and that gives a chassis that feels stiffer and lighter for greater responsiveness.

The eight-speed torque convertor transmission is well-tuned and comes with three different driving modes, normal, Eco and Sport that change the shift points and throttle mapping to adjust to different conditions.

Steering is sharp and direct.

Factory tested fuel consumption is listed at 6.4 litres per 100 kilometres. We average in the middle sevens in our usual blend of urban and motorway driving.

SUMMING UP
Focus competes in probably the most competitive segment up against the three heavy hitters, Toyota Corolla, Mazda3 and Hyundai i30. Although it lags well behind them in the sales charts, the Ford’s sporty design and driving dynamics make it worth a comparative test drive.