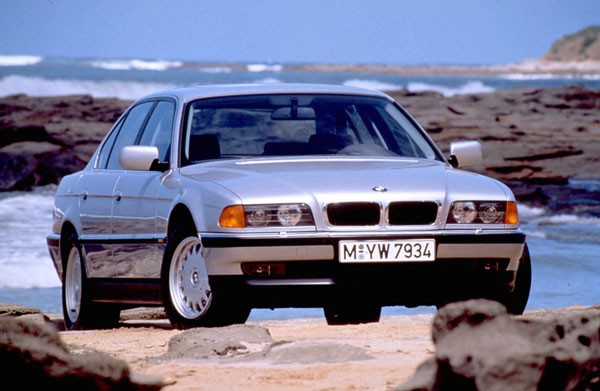 The BMW 7 Series is the largest model in the sedan lineup from the prestigious German marque. Interestingly, many 7 Series owners say they buy a used 7 that’s a few years old instead of a new Holden Caprice or the like. While the BMW and Holden are similar in size and performance they differ greatly in service and repair costs.

Unless your budget can handle the occasional huge slug it might be best to steer clear of the Bimmer, but if you can afford one you will enjoy a prestigious saloon that pampers you in a near silent interior.

The greater mass and bulk of the BMW 7 Series means it’s less exciting to drive than smaller BMWs, but road grip is excellent and steering is responsive in the manner of any big sporty sedan.

The 7 Series, shape was simple and elegant in older models, tagged as the E38; but the all-new E65 series, launched in 2002, took a controversial new styling approach. Though many said they didn’t like the radical lines slow sales weren’t really affected. However, a major facelift in 2005 toned down the shape. The all-new BMW 7 Series, the F01, reached Australia in March 2009 carried a far more sedate shape. 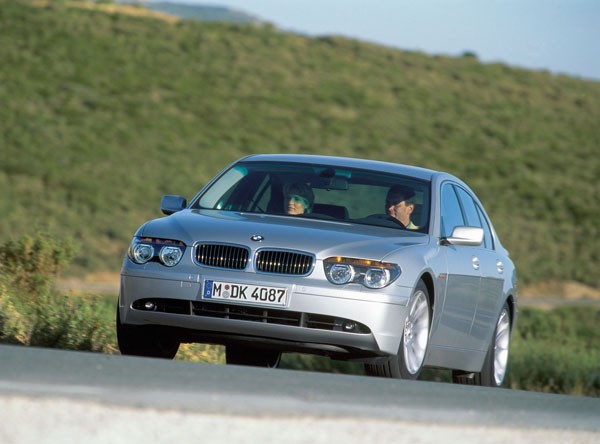 BMW’s complex iDrive system was intended to operate hundreds of functions, with the intention of doing away with virtually every button or switch. The ‘missing’ buttons and switches have gradually returned over the years and the operation of the iDrive has been simplified.

Most 7 Series sold in Australia have standard wheelbase bodies as they are intended to be driven by the owner. Long-wheelbase versions (look for an ‘L’ in their name) have extra legroom in the back and are often chauffeur driven.

Luggage space is fair for a car of this size but the low, semi-sporty styling means the boot is relatively shallow.

Earlier BMW 7 Series had been famed for their straight six engines, but from the mid ‘90s these were often replaced by V8s. The latest models use smaller capacity sixes and eights that are powered up by single or twin turbochargers. Turbos are used to lower emissions and fuel consumption but, inevitably, they have lost some of the brilliant response that we just love in the naturally aspirated units. Ah well, nothing stays the same. 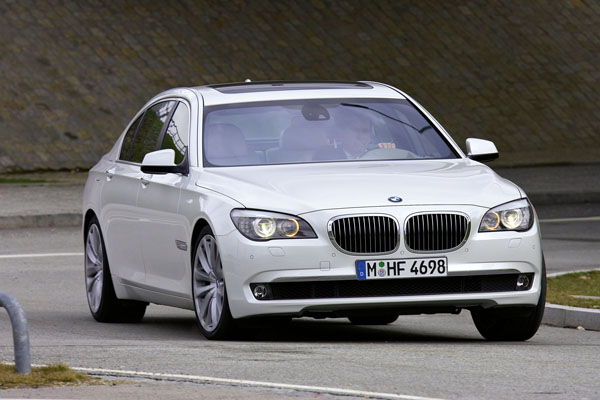 At the top of the engine tree are super-smooth, very-expensive V12s. If you’re the sort of person who demands nothing but the biggest and best, there’s nothing quite like the V12 under that long, elegant bonnet.

The BMW 7-Series led the way in the move to major electronic controls of driving, safety and navigation. The more recent the model the more computers it runs. Despite being in the field in the early days BMW didn’t really suffer from the early-adopter syndrome and we hear of no real ongoing problems.

Servicing and repairs are expensive and the complex nature of the BMW 7 Series virtually demands that all the work be done at a BMW dealership. If you can’t afford to run a car like this don’t buy one.

Repairs really should be left to experts. A good amateur mechanic will be able to do some work, but shouldn’t attempt it without a workshop manual. As always, safety items should only be touched by those who know what they are doing.

Insurance isn’t cheap, hardly a surprise considering the complexity of these cars, and the cost of spare parts. While there doesn’t seem to be a huge difference between the premiums asked by insurance companies it’s probably smart to shop around. Keep in mind, though, that a long history with an insurer can benefit you if you make a claim that may be marginal.

WHAT TO LOOK FOR
Look over the body for repaired crash damage. If you suspect anything, no matter how trivial, have it checked by an expert.

If the crash turns out to be a bad one, it’s smart to follow up with a chassis alignment tested. Or follow up by walking away from the purchase.

Quite a few BMW 7-series are used as hire cars. These are generally looked after well and driven correctly, but will have done a lot of work. Look at the condition of the seats, dashboard top and rear parcel shelf as well as the carpets. Also check inside the boot.

The engine should start within about a second of the key being turned and, even on the coldest morning, settle immediately into a steady idle. Once the engine has warmed up try some hard acceleration from a standing start and look for smoke from the exhaust.

An automatic transmission should engage gears from Neutral or Park within a second of the selector being moved. When on the move, shifts should be all but imperceptibly unless you’re driving really hard.

If the transmission remains in one gear at all times when Drive is selected it is running in its limp-home mode and needs attention.

Always have a BMW dealer do the final inspection.

CAR BUYING TIP
Cars that are expensive to buy are almost invariably expensive to repair. Too many people forget this fact – and regret it later…