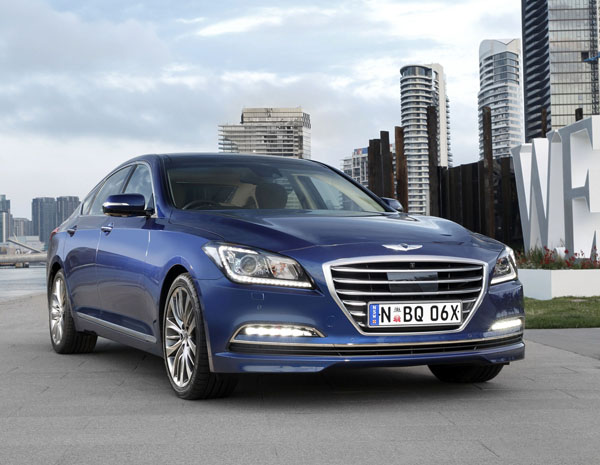 Hyundai is arguably the most ambitious of all the world’s major automotive marques. One of its major goals is to lift its image from being merely the maker of ‘value-for-money’ cars.

So the big Korean has designed the Hyundai Genesis. An upmarket, high-tech machine designed to tackle the big-name European brands at their own game.

The Australian branch of Hyundai isn’t exactly run by shrinking violets and the local bigwigs have spent five frustrating years looking at the Genesis overseas, knowing they couldn’t sell it downunder – it has been sold in other countries since 2009 but, frustratingly, only those which had the steering wheel on the left.

Hyundai Australia put considerable pressure on the South Korean head office to build the gen-two Genesis in right-hand drive, as did importers in the UK and New Zealand. So the upmarket Hyundai is finally on sale here. 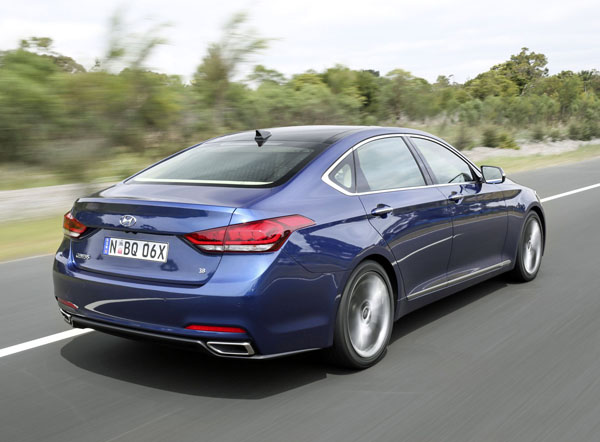 The Genesis is a large car; marginally bigger than the Holden Commodore and Ford Falcon. It’s also a little larger than the cars with which Hyundai would like to compete head on; Mercedes-Benz E-Class, BMW 5 Series and Audi A6.

STYLING
Fascinatingly, an Australian born Korean, Casey Hyun, is one of the major designers at Hyundai and was heavily involved in Genesis.

The big car is not as radical in appearance as the smaller Hyundai models. We described its shape as having ‘conservative sleekness’ during an extended trip to Hyundai’s facilities in Korea a few months back. It still looks that way to us now we’ve attended the national media launch in Canberra. 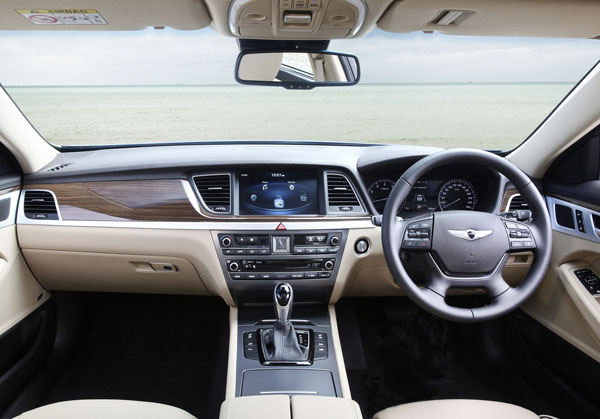 The body theme is based around a new single-piece grille theme. The side profile is curved and almost in four-door coupe territory. There’s the seemingly mandatory kick up in the window line at the side-rear. Tail treatment has a built-in spoiler lip and a wide stance that give Genesis a powerful look from the rear.

The in-cabin feel is likely to be a major selling feature of the new Genesis. Style and quality are particularly impressive; there’s leather with a hand-stitched look, real timber, suede and aluminium.

Like just about every other upmarket car these days the Genesis has an analog-look clock sitting in a prominent position on the dashboard.

ENGINE / TRANSMISSION
Only one engine is offered in all Australian Genesis. A modern 3.8-litre direct-injection petrol V6 developing 235 kilowatts of power and 400 Nm of torque. A V8 is installed in other markets, but the old problem has arisen – it’s not fitted in righthand drive models. Maybe next time…

Transmission is by an eight-speed automatic to the rear wheels.

INFOTAINMENT
The Hyundai Genesis is crammed with the latest in in-car entreatment, including a 17-speaker Lexicon audio system. Bluetooth, USB and Aux inputs are simple to use.

SAFETY
Hyundai Genesis has gained the highest score ever in Australian NCAP testing, an impressive feat given the huge amount of work being done in this field by the major European car makers.

There are numerous crash avoidance or minimisation features, including all-round electronic vision, automatic emergency braking, lane keeping, radar cruise control and a large, coloured head-up display. Not all items are sold in all models, contact your local dealer for details.

DRIVING
Seat comfort in the front is very good and there’s decent support without the seat bolsters being too aggressive, after all, the Genesis isn’t aimed at sports sedan buyers.

Despite the semi-coupe roofline, there’s good headroom in the rear. The rear seat provides good head and legroom. Three can be carried, but as is the norm in rear-drive cars some foot comfort is stolen by the transmission tunnel.

The centre armrest in the rear folds down to provide access to many functions such as the ventilation system. As is often the way in Asian limousines the front passenger seat can be moved by way of controls in the rear seats. This gives the most important person in a limo – the one diagonally behind the driver – the ability to maximise their knee and foot room

Hyundai’s 3.8-litre V6 engine is not only strong and responsive throughout its rev range, but also provides the sort of intake and exhaust sounds drivers love to hear when the car is punted hard. The car may be relatively conservative, but the engine feel and aural outputs are anything but.

Noise and vibration are subdued to impressively low levels. This car really will make an excellent long distance tourer, even on rough and ready Australian bush roads.

Generally buyers in this class put comfort ahead of high road grip and dynamic steering. Hyundai Australia fees that our drivers like a bit of feel and feedback so have modified the suspension, giving it a slightly firmer feel than the cars we previewed in Korea earlier in the year.

Road grip is very good and the car is nicely balanced, even better the Genesis can be cornered on the throttle in true rear-drive fashion. We love it.

SUMMING UP
Is the Hyundai Genesis as good as the big name Germans it has been built to tackle on the world automotive stage? In quality and style it certainly is, and that’s what many wise buyers are looking for.

In terms of value for money the South Korean machine makes the Germans look seriously overpriced.

Even more to the point – does the Genesis rank as highly as the Germans in the image stakes? The answer has to be a definite No. Badge snobbery is alive and well; always has been, always will be.

To get around this Hyundai Australia is cleverly targeting what it calls ‘astute buyers’. That is people who simply want a large high-quality car, but aren’t prepared to pay tens of thousands dollars more just to get the ‘right’ badges on it.

Interestingly, a factor in Genesis’ favour may be the demise of Ford and Holden in local car manufacturing. Limousine companies, taxi operators, high level corporate owners, even government fleets, are all on the lookout for large cars to replace Caprice, Commodore, LTD, Fairlane and Falcon. It seems likely the Genesis will sit on the short list of those buyers.

For another $11,000 the Ultimate Pack includes all of the Sensory Pack features together with extra luxury in the form of a panoramic glass roof, ventilated front seats, heated rear seats, automatic soft-closing doors, power bootlid and rear door side curtains.

Note that these prices do not include government or dealer delivery charges. Contact your local Hyundai dealer for driveaway prices.