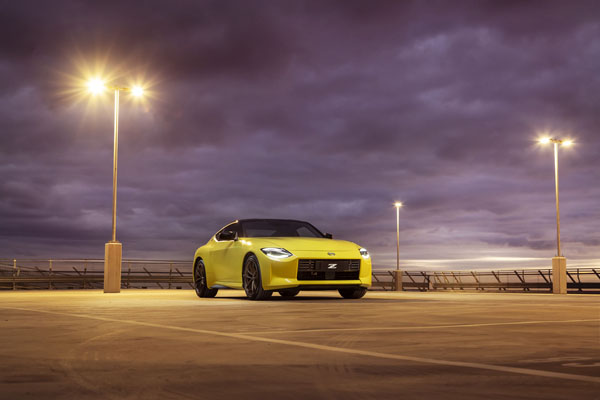 Australian prices have been locked in for Nissan’s highly anticipated new twin-turbo V6
sports coupe, with the latest version of the legendary Z to be introduced at $73,300.

A special edition Proto Spec flagship version, exclusively in Ikazuchi Yellow paintwork
topped by a Super Black roof, will be offered until sold out. The Z Proto Spec, with its
bespoke interior and 19-inch bronze forged alloy wheels enclosing yellow brake calipers,
will be priced at $80,700 MSRP.

Unlike the Z Coupe, which will arrive in greater numbers, the Z Proto is strictly limited, with
several hundred reservations so far received by Nissan Australia.

“I know Australian fans of the Z family have been waiting patiently for further details about
this impressive new sports coupe, and I’m thrilled to be able to confirm pricing and further
specification details for our market,” says Nissan Australia Managing Director, Adam
Paterson.

“The fastest, most powerful and most exciting Z car ever is now ready to launch in
Australia, and I can’t wait for people to climb behind the wheel of this new icon.”

The latest Z, proudly still rear-wheel drive and offered with the option of a close-ratio
manual gearbox in keeping with the Nissan Z car sports lineage, can trace its origins back
to the much-loved 240Z, which was first introduced to Australia in September 1970.

The new Z is powered by a 3.0-litre twin-turbo V6 with variable valve timing, small-
diameter turbochargers, regulated for maximum spooling speed and to balance power
output and throttle-response time.

Peak power and torque rise in the new engine to 298kW and 475Nm – the latter being 31
per cent higher than its predecessor – ensuring exhilarating performance in the new Nissan
Z.

The standard specification for Australia will have a leather-accented interior, launch
control, a fully customisable 12.3-inch TFT display, an 8.0-inch infotainment screen with
Android Auto and Apple CarPlay smart-phone integration.

It offers three driving modes – Standard, Enhanced and Sport – each one automatically
optimising the information provided to the driver.

The optional nine-speed automatic gearbox is fly-by-wire for rapid response to inputs from
the paddle-shifters and has two drive modes – Standard and Sport.

Nissan tells us, “This is not just a new car, it’s an icon, evolved.

The new Nissan Z will be on sale in Australia in mid-2022 at a date yet to be announced.
We will advise you when the date is set and anticipate there will be further details advised
then.