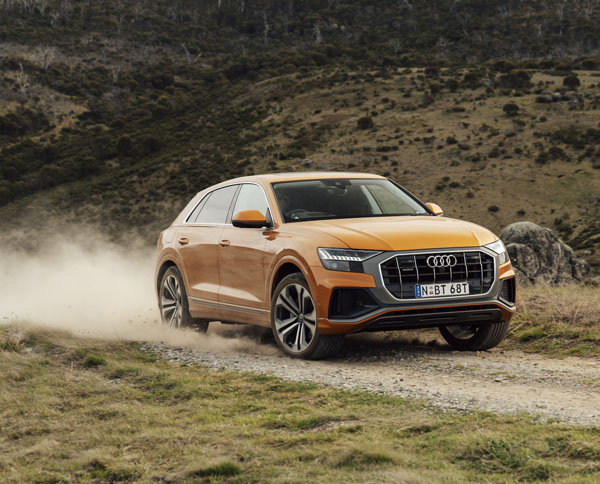 An all-new model in the Audi lineup, the Q8 is a large SUV. While many SUVs have become sleeker, indeed almost coupe-like in their shape in recent years, Audi’s designers have endowed their Q8 with an imposing stance. The huge Audi single-frame grille with vertical strakes and a heavily contoured front spoiler make the big Audi instantly recognisable.

The bold shape continues along the sides with large wheelarches, and the slope down of the roof towards the rear is minimal. Interestingly, though, the Q8 has frameless doors.

Interiors are something Audi arguably does better than anyone else. The Q8 impresses with a minimalist black-panel look that sweeps all the way across the dash. Two displays, 10.1-inch and 8.6-inch, interact with the high-res 12.3-inch Audi virtual cockpit.

The topline model, the Q8 55 with a V6 turbo-petrol engine will be first cab off the rank. With an impressive 250 kW of power and torque of 500 Nm between 2900 and 5300rpm it has huge performance – a claimed sub six-seconds to 100 km/h. It drives all four wheels through an eight-speed automatic transmission. 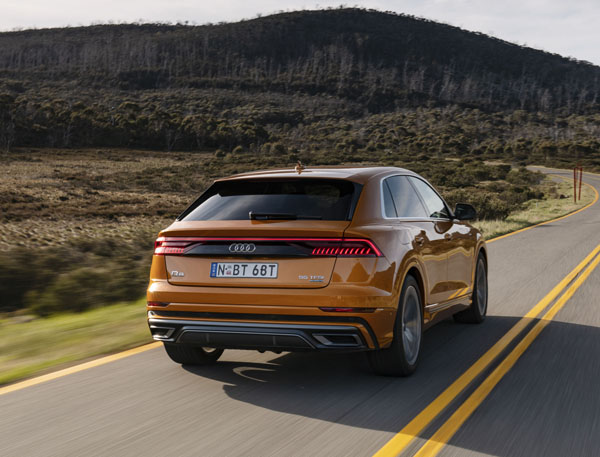 Safety is assured in the all-new Audi Q8 with no fewer than 39 driver assistance systems to provide both active and passive safety protection for occupants.

While the Q8 won’t be on sale until January, dealers will be happy to take orders now.

DRIVING
Audi held the media launch of the new Q8 in Canberra and put together an entertaining drive program to Cooma by way of Crackenback. These are the sort of areas likely to be used by owners on trips to the ski fields from the nation’s capital, Sydney or Melbourne.

An increasing number of people are touring around the Snowies in summer, personally we have discovered that traffic is minimal and accommodation prices low. So Audi holding the Q8’s launch in December isn’t as odd as it might have seemed.

The drive program kept away from the major routes quite a bit of the time and covered flat areas mixed with plenty of hilly roads and a fair bit of dirt road work. No serious off-road work was included and obviously the roads weren’t icy.

Audi Q8 is pretty heavy at two and a quarter tonnes, but it felt smaller and lighter than it really was thanks to the Audi’s impressive suspension systems.

Air suspension is used in some models and made the ride almost boulevard-like on rough and ready backroads. The steel suspension wasn’t quite as smooth but still retained its composure.

Corrugated dirt was smoothed out almost as though it wasn’t there. Coarse-chip bitumen obviously did increase noise levels, but to a minimum extent. On smooth roads the Q8 was limo-like in its smoothness and near silence on good quality roads.

Handling is neat and accurate, but the sheer mass of the Q8 means you wouldn’t call it agile. Which probably suits the passengers on trips like this as its stops Dad becoming overly enthusiastic in his driving (not a sexist remark – almost invariably it’s Dad who’s the culprit…)

Two-wheel steering and four-wheel steering were driven for extended distances. As we have discovered before in the the Audi A7 and A8 steering by the back wheels as well as the front really makes a large vehicle seem to read the driver’s mind. Beautiful!

As a real bonus the four-wheel-steered Q8 has a tighter turning circle, something that will come in very hand in the really world inhabited by most SUVs – shopping centre carparks, drop-off areas at schools and the like.