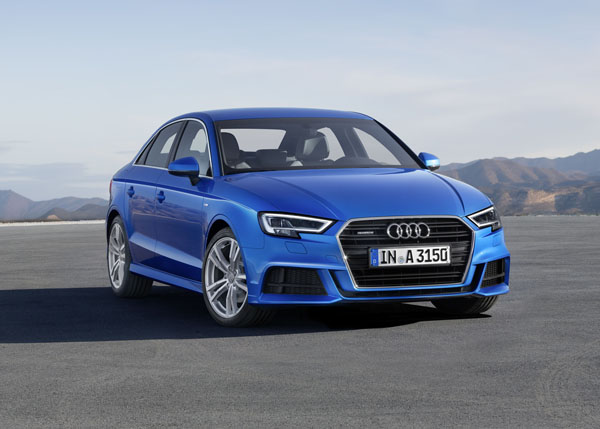 The thing about being at the front of the pack is that you are always looking over your shoulder. It is a far easier ride for those competitors in your slipstream, biding their time, waiting for the slightest stumble so they can make their move.

To stop that crick in the neck, it makes sense to step up the pace and try to widen the gap. Not so much that you run out of puff mind you, but enough so that you give yourself a chance to breathe.

That’s what Audi has done with its new A3 range. A leader in a premium segment it pretty much invented, Audi has been feeling the heat from rivals Mercedes-Benz and BMW who also recently updated their offerings in the small car over $40k market.

With an expanded line-up, new engines and tweaks both inside and out, the new range is charged with keeping the A3 ahead of the pack and cementing the model as Audi’s volume seller in this country.

EXTERIOR DESIGN
There is obvious styling direction from the updated A4 with a wider grille, revised bumpers and new taillights. The 2.0 TFSI quattro features Audi’s S-Line design with a lower suspension, larger alloys and sportier exterior for a fun yet restrained look. There is something classy about being comfortable with one’s capability without shoving it in the faces of all who venture near. 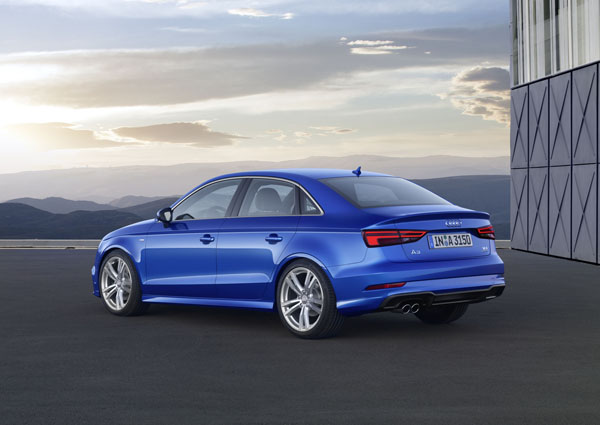 PRACTICALITY AND SPACE
Restraint seems to be the palette of choice for the interior as well with Audi opting for a decidedly minimalist look. Integrated buttons and dials and a retracting 7.0-inch colour infotainment screen do their bit to create a dash with an almost seamless design while the Virtual Cockpit adds that undeniable pizzazz.

The MMI navigation system is now standard across the range and the rotary dial operation system has been modified to make it easier to use. Squiggly writing will still see you come a cropper though with the navigation system quick to pass judgement on hastily formed letters.

Our Sportback felt quite roomy despite its sloping roof with comfortable leather seats long enough under the thigh to accommodate taller drivers. The second row can carry two with ease, especially if they are children, although three adults can be persuaded in there at a push.

Boot space is adequate for a young family or couple. Kids car seats are easy to fit and we even managed to get the cello in there along with a couple of school bags.

In-cabin storage is usable without being over generous but good enough to carry a couple of water bottles and a mobile phone. 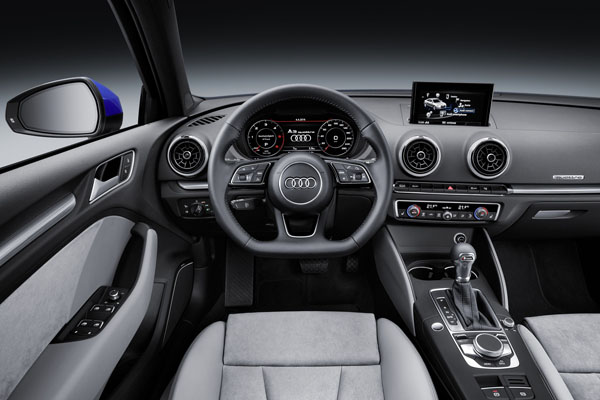 The new three-spoke flat bottom steering wheel is the star of the show here. Not only is it a leather-wrapped delight in the hand but it has all the button controls you need to operate the car at its maximum while easily accessible paddles are a nice plus too.

The Assistance package ($1500) adaptive cruise control including Audi pre-sense, active lane assist, side assist, high-beam assist and hill-hold assist, worthwhile features which, let’s face it, in this price range should be standard.

UNDER THE BONNET
Our 2.0 TFSI quattro test car featured Audi’s new feisty turbo-charged 2.0-litre four-cylinder petrol engine which replaces the outgoing 1.8-litre unit and offers 140 kW and 320 Nm allowing the A3 to rollick along at a more than zippy pace.

It is paired with a willing seven-speed dual-clutch S tronic transmission that behaves as it should, moving quickly through the lower gears to save fuel and holding the higher gears longer for better performance.

HOW DOES IT DRIVE?
With unharried (XXXX SUBS: CORRECT) power delivery, great handling and comfortable surrounds, it is easy to see why the A3 is such a stalwart of the brand here in Australia.

The drive is uncomplicated, almost effortless really, and dare we say, a little bit of fun. The A3 does well in all everyday situations, moving through inner city frustrations with little fuss and is happy to stretch out on the highway when you give it its head.

This car can move – sure, it’s not as fast as the S3, but with a time of 6.2 seconds from 0-100 km/h, it’s no slouch either. You don’t have to be hoon to appreciate this power especially when you are trying to merge or overtake quickly.

It is nimble too, changing direction well, settling into corners nicely and offering confidence when pushed through quickly.

The quattro drive system really comes into its on wet surfaces and in pelting rain, planting the A3 assuredly on the tarmac when many others would falter. It also accommodates a more comfortable run on inner city roads while leaving room for a more dynamic run among the twisties.

The gearbox hardly misses a beat and although you have paddles if you want them, they are clearly for your sense of involvement rather than any actual improvement in performance.

There is a fair bit of road noise though although that is likely just the larger wheels.

Audi suggests an average combined fuel use of 6.1L/100km. Our real-world figures tended to stay around 7.8L/100km, not bad I suppose, but you do have to use expensive 98RON.

VERDICT
With a sharp new interior, great driveability and on-trend features, the A3 2.0 TFSI quattro is a premium German offering at an affordable price. It is a fun yet practical car in an astutely updated range that will give Audi the best chance to stay ahead of the pack.