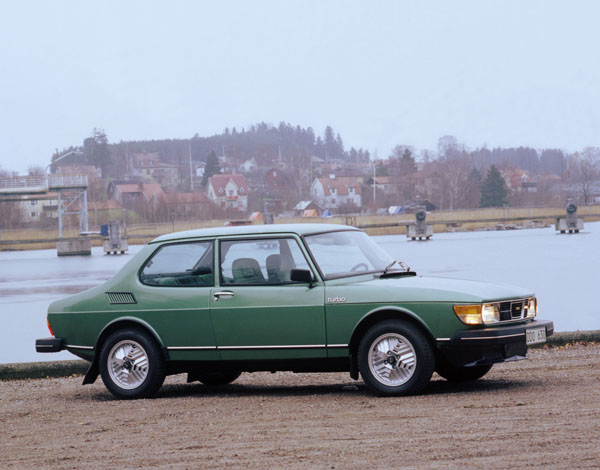 The Saab 99 became available to the public at the beginning of the European autumn in 1968, being introduced as the 1969 model. By then front-wheel drive was no longer as unique as it had been on the 92 in the late 1940s. Whereas only about 5 per cent of all cars in the world boasted the feature at that time, the figure had reached 20 per cent in 1969 and was rising steadily. Although compelled to abandon the two-stroke engine, Saab had never entertained any thought of forsaking the drive which had made such a significant contribution to the marque’s reputation for unsurpassed driving qualities.

The new 1709 cc engine was of modern design, featuring an overhead camshaft which permitted high speeds and required less valve adjustment than the conventional push rod type. Driven by a simple chain, the camshaft operated the valves directly through lightweight depressors. The cross-flow cylinder head was of aluminium, with the induction passages on one side and the exhaust passages on the other. The engine was mounted longitudinally between the front wheels at an angle of 45 degrees and was designed in collaboration with Standard-Triumph of the UK.

As before, the steering was of the rack and pinion type with the steering box in a well-protected location behind the engine at the very rear of the compartment. The car was equipped with servo-assisted disc brakes all round, featuring the same dual-circuit system as previously used on the model 96. Particular attention was devoted to rustproofing the 99 body and items such as hub caps, bumpers and various grilles were made from either stainless steel or aluminium.

Also occupant safety was considered by the use of impact-absorbing padding on the window and roof pillars. One feature of the 99 which irritated many drivers was the ignition switch, which was mounted on a console between the seats, alongside the freewheel control. The key could not be removed without engaging reverse!

In appearance the 99 differed considerably from its contemporaries and motoring journalists were unable to decide whether the model was attractive or ugly. Its low front and high rear gave it a distinct wedge shape – a profile which was not to become generally popular until much later. The basic lines of the 99 are easily recognisable in the current 90 and 900 models. This design has stood the test of time for
20 years without requiring drastic modification. The body lines contributed to the excellent
stability of the car on the road, one aspect of which was its relative immunity to crosswinds.

The 4-door model was introduced in April 1970. The overall dimensions of the car were the same as the earlier 2-door model. By the end of the European spring the 99 was available in no less than four different variants consisting of 2-door and 4-door saloons, each with a choice of manual or automatic transmission.