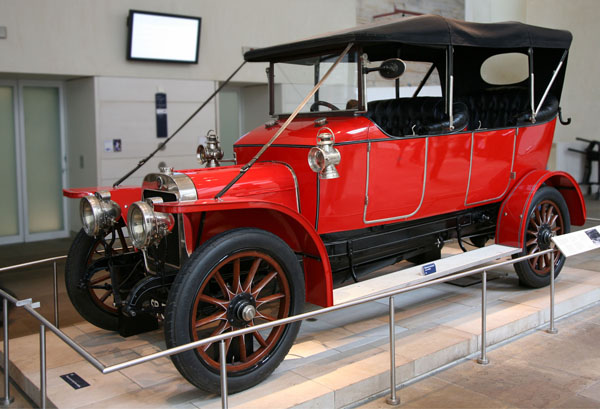 Argyll was a Scottish marque and its first cars were Renault based and built in Glasgow in 1899. Tasting some success in the early life of their business its management set about to become a major automotive manufacturer and proceeded to build a large new factory in Scotland near Loch Lomond.

The first Argylls to come out of this factory had what were considered to be conventional engines at that time, but from 1909 they went on to develop and manufacture sleeve-valve engines, which, whilst being quieter and technically more advanced, had certain drawbacks.

To work effectively sleeve-valve engines required precise technology and manufacturing processes or they did not work properly. Also they did not lend themselves to use in small motors of 1.5-litre capacity or even less. A sleeve valve takes the form of one or more machined sleeves. It fits between the piston and the cylinder wall in the cylinder of an internal combustion engine where it rotates and/or slides, ports (holes) in the side of the valve(s) aligning with the cylinder’s inlet and exhaust ports at the appropriate stages in the engine’s cycle. The sleeve-valve is a type of valve mechanism for piston engines, distinct from the more common poppet valve.

Sleeve-valve engines were used in a number of pre-World War II luxury and sports cars including Willys-Knight. British Daimler and French Avions Voisin luxury cars also used the Willys-Knight double-sleeve system. The Scottish Argyll company used its own, much simpler and efficient, single-sleeve system in its cars. This system which, after extensive development, saw substantial use in aircraft engines of the 1940s, such as Napier Sabre and Bristol Hercules and Centaurus, only to be supplanted by the jet engine.

The first sleeve valve Argyll was the large 18.15 kW model which was introduced in 1911 and commenced selling in 1912. This was a conventional automobile, the top of the Argyll range, and aimed squarely at the wealthy buyer who might be in the market for a Daimler or similar prestigious model. It was not a cheap car but for the money the buyer got a well-constricted body, a modern chassis, four-wheel brakes, a quiet and flexible engine with four-speed transmission and a quiet and very comfortable ride. But its sales were limited by the high price tag. Unfortunately the sleeve-valve engine was bugged with problems and since Argyll had to defend an expensive charge of patent infringement the company struggled financially.

In an attempt to become a more viable automotive manufacturer Argyll looked at producing smaller and cheaper cars but soon came to the realisation that sleeve-valve engines were not a proposition for smaller engines.