ARE YOUR AIRBAGS SAFE? 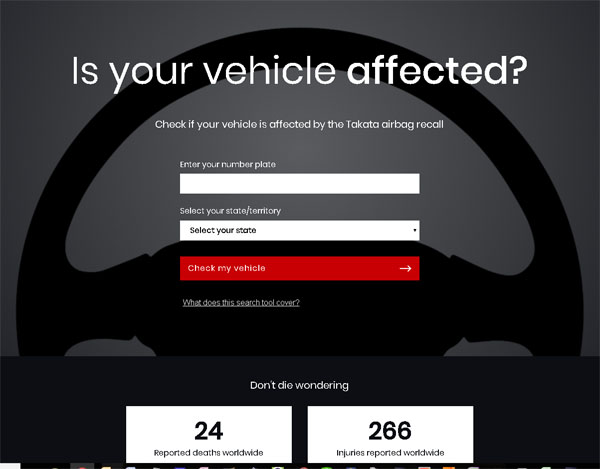 Vehicle owners throughout Australia are being urged by the Federal Chamber of Automotive Industries (FCAI) to check if their vehicles are fitted with a faulty Takata airbag inflator.

www.IsMyAirbagSafe.com.au/ will be publicised by a national advertising campaign to get vehicle owners to the site to check their number plate against the database of affected vehicles.

The campaign’s powerful message “Don’t Die Wondering” is deliberately confronting to gain the attention of more than 1.6 million vehicle owners whose Takata airbag inflators currently, or in the future, will need replacing.

Replacement of the affected airbag inflator is free.

There have been 24 reported deaths and 266 injuries worldwide caused by mis-deploying Takata airbag inflator ruptures.

One death and one serious injury have been reported in Australia.

These alpha airbag inflators were installed in certain BMW, Honda, Lexus, Mazda, Nissan and Toyota models sold between 2001 and 2004.

“Some 19,500 vehicles in Australia still need to have their alpha airbag inflators replaced as a matter of utmost urgency,” says FCAI chief Tony Weber said.

“In certain circumstances, there is a chance as high as 1-in-2 that these may rupture on deployment in a collision. These vehicles with alpha airbag inflators should not be driven and owners should immediately contact their manufacturer.”

“If a faulty Takata airbag inflator ruptures, metal fragments will propel out of the airbag and into the vehicle cabin, potentially causing serious injury or death to occupants.

The extreme urgency attached to alpha airbag inflator replacements has resulted in attempts to contact owners multiple times – often as many as five or six times via mail and other contact methods such as SMS and phone calls.