Late in 2021 Kia launched the fifth generation Sportage mid-sized SUV. The Gens 3 and 4
were big seller in Australia for many years, frequently topping the sales charts in its class.
Not just topping them, but leaving the others in its class so far behind that their marketing
departments must have been close to tears.

The Gen 5 Kia Sportage is sold in four variants, entry-level S, mid-spec SX and SX+ and
top-grade GT-Line. Our review car for the week was the SX.

STYLING.
The front has a much bolder look its predecessor, with a gloss black grille stretched across
the width of the vehicle. It’s flanked by a pair of boomerang-shaped LED daytime running
lights which frame the diagonal LED headlights.

In profile there’s a semi-fastback look to new Sportage with the roofline sloping sharply
down to the integrated spoiler and angular taillights which are linked by a strong horizontal
line that gives a wider appearance.

INTERIOR
The cabin has an upmarket look and feel that’s impressive in a vehicle selling at a compa-
rable moderate price. 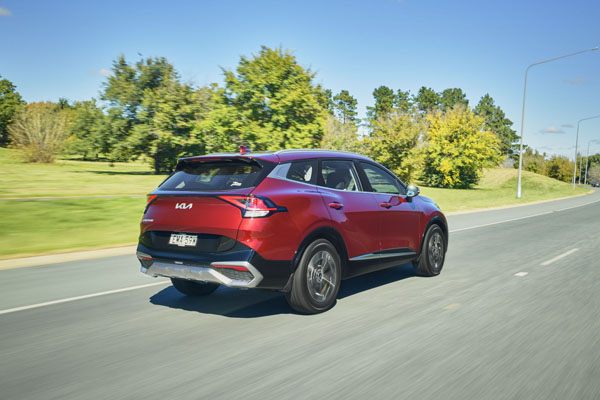 It’s now larger in all external dimensions than the outgoing model and that contributes to
extra interior space, especially in the rear seats. There’s stretch out space for four adults,
five without too much shoulder and hip running in the back. Only

The SX, SX+ and GT-Line get satellite navigation with 10-year updates as well as the ca-
pacity to personalise their preferences such as radio favourites and Bluetooth priorities.

Apple CarPlay and Android Auto are both available. We found Bluetooth pairing to be fast
and intuitive, always a plus when you’re in our position of frequent swapping from vehicle
to vehicle during road testing.

As always, DAB+ dropped out far too often, not only when driving in our home area where
there are lots of high-rise buildings, but also when running on roads cut through hilly areas
or with lots of trees on verges. 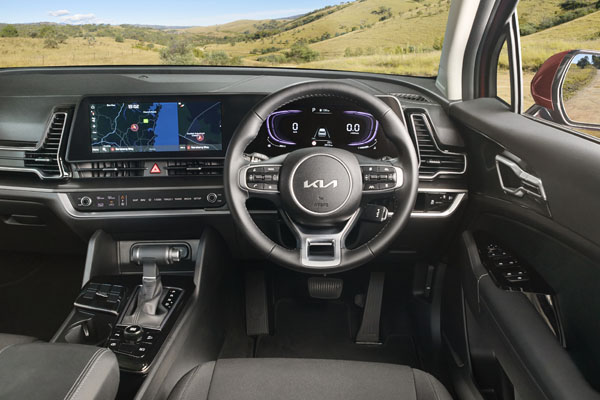 ENGINES / TRANSMISSIONS
There’s a huge choice of powertrains in new Sportage: including two petrol and one diesel
engines; manual and three different automatic transmissions; and either front or all-wheel
drive.

The S and SX models each get the naturally-aspirated MPI 2.0-litre petrol engine that car-
ries over from the outgoing Sportage. Peak outputs are 115 kW and 192 Nm and it comes
with the choice of six-speed manual or six-speed automatic transmissions and front-wheel
drive.

Available across all four variants is a 2.0-litre turbo-diesel that generates 137 kW and 416
Nm. It’s mated to an eight-speed auto and only comes with all-wheel drive. This was the
powertrain in our test car.

The top spec GT-Line comes with either the 1.6T-GDI or the 2.0 CRDI with eight-speed
automatic transmission and all-wheel-drive.

The Sportage SX+ gets the full menu choice with both of the above engines as well as a
new 1.6T-GDI engine producing 132 kW of power and up to 265 Nm turbo-petrol unit
linked to a seven-speed dual-clutch automatic.

DRIVING
As with all Australian Kia models there has been considerable local input into tuning
Sportage to suit our driving conditions and the likes of typical owners.

The result is improved ride and handling that combines comfort with stability even when
pushed reasonably hard. During our test period we covered close to 500 kilometres on our
usual selection of roads that included 100 km/h motorways, suburban streets, shopping
centres and hilly country roads. Some of the latter are in good condition, others have been
knocked around a fair bit by the recent heavy rains and floods.

We liked it, and suspect that many the ‘typical’ Aussie drivers will like it as well. It’s certain-
ly worth adding to your list of medium-large SUVs under consideration.

SUMMING UP
With its combination of striking new looks, a large choice of drivetrains, added safety fea-
tures and the impressive seven-year warranty the new Kia Sportage has plenty of offer.

Would we buy one? It’s larger than we need for our two-people-plus-a-dog family but other
than that it’s got a lot going for it.