Renault Kadjar is a midsize SUV that is a co-design between French Renault and Japanese Nissan. These companies have been working together successfully for many years.

Like many in this class it has a leaning towards being a comfortable people mover rather than to harsh off-road work. That’s exactly what buyers want so it’s a smart design.

However, if you want to do some light to moderate off-road driving the Kadjar is protected by front and rear skid plates.

Kadjar is offered in Life, Zen and Intens variants. Life and Zen have halogen headlights, Intens gets LEDs. Life and Zen roll on 17-inch alloys wheels, two-tone on the latter. Intens has 19-inch alloys. Our test car was the Kadjar Intens.

STYLING
Styling is attractive, but somehow we had expected a bit more French flair to make it stand out from its many, mainly Asian, competitors.

At the front Kadjar carries over the C-shape light signature from the Renault range. Though it shares much of its bodywork with the Nissan Qashqai the front is clearly identifiable as a Renault thanks to a standout version of the company’s diamond in the centre of the grille. The turn indicators are neatly integrated into the DRLs (daytime running lights).

As well as the aforementioned front and rear skid plates, there are also lower door protective mouldings. Black wheel arch extensions and anodised satin grey roof bars give it a stylish French look.

ENGINES / TRANSMISSIONS
Kadjar is powered by a 1.3-litre turbo-petrol engine with 117 kW of power at 5500 rpm and 260 Nm of torque at 1750 revs. It’s mated top seven-speed EDC dual-clutch automatic. See further information in the Driving segment of this review. 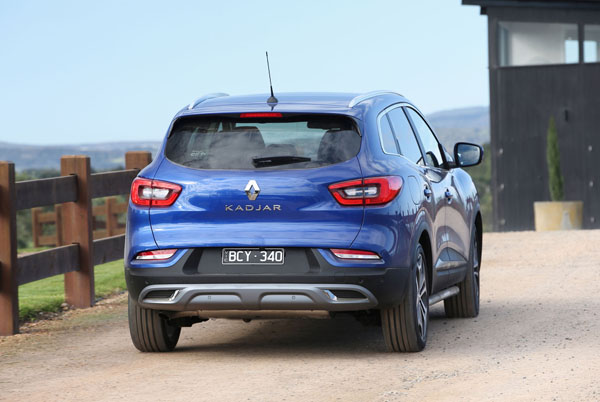 SAFETY
It goes without saying that Renault was the first ever company to achieve a five-star safety rating so Kadjar has that top rating.

Parking is simplified in all variants by front and rear parking sensors, rear parking camera. It has cruise control with speed limiter.

INFOTAINMENT
The touchscreen is a 7-inch unit and displays the Renault R-LINK 2 system that’s fully customisable. It includes a smartphone mirroring function and is compatible with Android Auto and Apple CarPlay.

The touch-sensitive buttons on the left side are far too small and are awkward to use. We suggest drivers keep their use of the buttons to times the Renault is stationary.

Apple CarPlay and Android Auto are available. Renault’s R-LINK 2 system had voice control in our test car, as is often the way it’s a little erratic at times in the way it responds to voices.

Kadjar has an Arkamys entertainment system installed in the lower spec models and BOSE in the Intens. Both systems drive seven speakers.

DRIVING
Interior space is well managed with good front headroom even in the top-spec Intens with its panoramic sunroof. There’s good rear legroom for any but the tallest folks.

The luggage area has a number of clever permutations including the ability to split it into two separate compartments. Check this out in detail when you’re at your Renault dealer as we know a couple of buyers who have chosen the Kadjar while comparing it with others in this class.

There’s good response from the high-tech 1.3-litre and a minimal amount of turbo-lag. The automatic responds promptly to the engine’s needs and is generally in the right ratio within a few tenths of a second.

Body control around bends and the occasional bumps were soaked up without any jarring.

Renault Kadjar has a five-year/unlimited km warranty. and very long service interval of 30,000km; or 12 months if that comes first.

It has five year / 150,000 km capped price servicing. As well as five years roadside assist if all servicing is carried out at Renault dealerships.

SUMMING UP
Renault Kadjar is a neat combination of people mover and SUV and is comfortable and practical. Its touch of French flair is much appreciated, as is the comfort supplied by well-tuned french-oriented suspension.