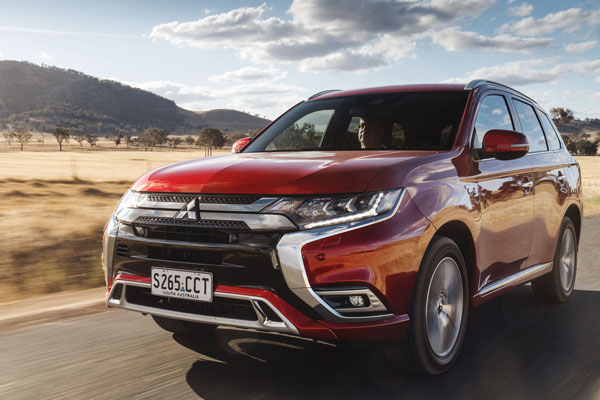 In 2010 Mitsubishi introduced the first ever mass production electric car to go on sale in Australia, the i-MiEV. In March 2014 the Japanese giant that specialises in electric vehicle technology brought the world’s first plug-in hybrid electric (PHEV) off-roader downunder.

The Outlander PHEV was upgraded in at the end of 2019 and is the subject of this week’s road test. See the Technology section for details.

STYLING
This Mitsubishi Outlander looks like any other Outlander, a deliberate move as the company doesn’t want it to be considered unusual, simply another version of the popular SUV. It has the Mitsubishi Dynamic Shield front so certainly stands out from competitors. There are some neat chromed touches at the rear as well. Overall, Outlander pleases our eyes.

Charging time is approximately seven hours using a type 1 charger, three hours (type 2) or an impressively short 25 minutes with a DC fast charger. Sadly, the latter are scarce in our area of the Gold Coast, indeed they are far from being common anywhere in this country. Hopefully this situation improves soon.

Two electric motors are used to drive the Outlander, one to the front wheels, the other to the rears. The 2.4-litre petrol engine can be used to charge the battery and/or drive the vehicle. In the city and suburbs it’s likely that most of the time it will only do recharging duties.

The officially measured range for Outlander PHEV on electricity alone is 54 kilometres. We managed 57 km by giving a fair bit of attention to driving for economy.

SAFETY
As well as specific items to make the electrical system safe, Mitsubishi Outlander PHEV has a strong suite of crash avoidance and prevention items. It is rated as a five-star vehicle by the Australasian New Car Assessment Program (ANCAP).

INFOTAINMENT
The central screen is large and easy to read with controls that are simple to use. This minimises the time you take your eyes off the road. 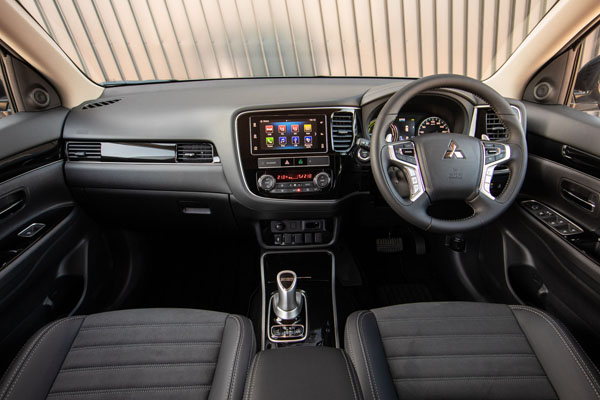 DRIVING
Unlike the standard Mitsubishi Outlander which can be specified with a third row of seats, making it a seven-seater, the PHEV only has two seat rows. This is due to the amount of space taken up underneath the boot floor by additional mechanical and electrical components. The second row seat is about seven millimetres higher than in the non-hybrid car, which marginally reduces headroom.

The battery is located under the Outlander and only reduces ground clearance by a few millimetres.

Braking without using the pedal – just letting the regenerative system do its work –
is strong and positive. Indeed owners take pride in not using the brakes. Anticipation is the name of the game and we managed quite a few trips without needing the hydraulic brakes.

Mitsubishi Outlander PHEV holds on well in bends, partly because of its lowish centre of gravity due to the underfloor batteries. It’s not a sports SUV but is likely to satisfy the great majority of owners.

We weren’t able to do any off-road driving as this may have contravened Covid-19 restrictions. But previous tests in the Outlander PHEVs during its launch event in Canberra in 2019 have shown it to be pretty capable, with the instant grunt of the electric motors making gentle throttle inputs easy. (Okay, I know it’s not a ‘throttle’ but don’t know of a better description for it…)

SUMMING UP
Mitsubishi Outlander PHEV is an impressive piece of engineering that we could happily live with. However, it’s relatively expensive and the serious shortage of public charging points is frustrating.

STATEMENT FROM MITSUBISHI AUSTRALIA:
“In many markets there have been successful policies introduced to encourage EV sales. If Australia were to adopt some of these it would be a positive start but it will require a long-term focus across all levels of government to achieve a significant change in EV vehicle demand in this market.”

MODEL RANGE
Note: These prices do not include government or dealer delivery charges. Contact your local Mitsubishi dealer for drive-away prices.