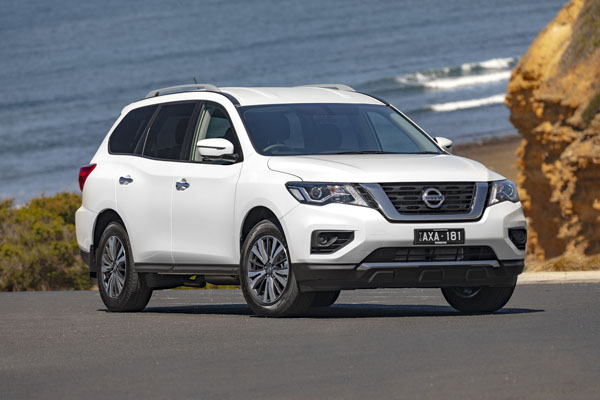 Nissan Pathfinder has been on sale in Australia since 1987, long before the term SUV was invented and vehicles of its type were simply called 4WDs.

The current (fourth generation) Pathfinder arrived here in 2013 with a smoother styling and aimed at the suburban market. Subsequent upgrades, the most recent of which was in April 2019, have made it more refined, safer and with added technology.

Pathfinder comes with the choice of a 3.5-litre V6 petrol engine or a supercharged 2.5-litre petrol / electric hybrid and either two- or four-wheel drive. The previous diesel alternative was dropped for the gen-four model.

There are four equipment levels: ST, ST+, ST-L and Ti with prices ranging from $43,390 for the Pathfinder ST V6 2WD through to $69,390 for the Ti Hybrid. In a sign of the times the premium for equivalent hybrid models is a reasonable $3000.

STYLING
While early Pathfinder 4WDs were quite square and rugged in appearance the latest models have evolved into the typical softer SUV style with smoother edges and sleeker profile.

At the front is the distinctive Nissan design signature ‘V-Motion’ grille and headlamps with boomerang-shaped LED daytime running lights. 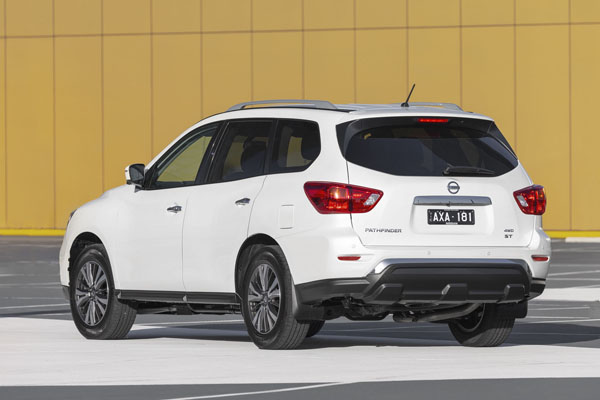 INTERIOR
At just over five metres in length and nearly two metres wide Pathfinder is large enough to fit seven seats in comfort and still provide 453 litres with all seats in place. This can expand to1354 litres with the third row folded and 2260 litres with second and third rows down.

Pathfinder has the Nissan EZ flex seating system, with the second row seats to recline and slide to provide extra leg room to third row occupants. Another plus for in the third row is that the 50/50 split row seats can also be reclined. 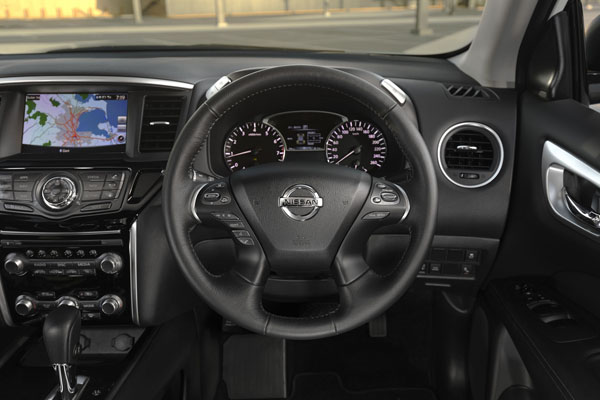 ENGINES / TRANSMISSIONS
The petrol-only Pathfinders are powered by an upgraded 3.5-litre V6 engine, while the hybrid variants rely on a supercharged 2.5-litre four-cylinder unit plus a 15kW electric motor.

Our test ST was fitted with the V6 petrol engine, which now delivers 202 kW of power and torque of 340 Nm at a very high 4800 rpm. Its Direct Injection Gasoline system provides better wide-open throttle performance for improved fuel economy and lower emissions.

All 2019 Pathfinder models are equipped with Nissan’s third-generation Xtronic continuously variable transmission with ‘D-Step logic control’ which simulates shifts in a stepped gearbox to suit drivers who won’t adapt to efficiency of CVT units.

The range topping Pathfinder Ti has a new feature called Rear Door Alert which reminds you to check if you’ve left someone behind.

INFOTAINMENT
Information display is through an embedded 8.0-inch colour touchscreen that sharp and easy to read with logical controls. There’s Bluetooth phone and audio streaming with voice recognition that’s easy to pair. There are twin USB ports on the lower grades, three on the topline Pathfinder Ti.

The entry-level ST Pathfinder doesn’t come with satellite navigation although it is standard on all higher-specced variants where it also includes 3D mapping graphics. In case you still get lost these models also come with a compass.

ST-L and Ti variants get a 13-speaker Bose premium audio system while the Ti looks after rear seat passengers with a Tri-zone entertainment system with wireless headphones, remote control and HDMI and USB ports for video playback.

DRIVING
With its large exterior dimensions Pathfinder there’s a bit of a climb for smaller occupants to get themselves in although the high driving position is a plus. It can be a bit of a handful to drive around town and especially in tight parking spaces.

The extra power and torque is noticeable and the big SUV moves sharply from a standstill thanks to the use of a CVT automatic. On the open road the added grunt together with firmer but not uncomfortable suspension and interior space make for a comfortable cruiser.

Like most modern SUVs Pathfinder is almost car-like in its refinement and general feel. Handling is reasonable although with its relatively high centre of gravity you can’t drive a Pathfinder as though it’s a car.

SUMMING UP
With more than three decades on the Australian market Nissan Pathfinder is a tried and proven performer both on and off the road. Although it’s due for a new model recent upgrades have added to its safety credentials and kept it up to date with the ever-changing technology enhancements.

Adding to the value equation Nissan has gone with the industry flow by increasing both the time and distance of their standard warranty to five years and unlimited kilometres.