It’s hard to believe the Mini is now in its 60th year, these days its shape is arguably one of the most recognisable of all. It began life as a tiny no-nonsense very-practical car that could carry four people with less squeezing than you might expect, but became a legend in its own lifetime.

Or rather two lifetimes, because the BMW Mini, launched in 2001 after the British maker got into so much financial strife that the German company moved in to sort out the mess.

Thankfully, the guys and gals at BMW understood what Mini had become over the years – though it had remained a sensible car – it had also become the king of the customisers.

Cleverly, styling changes on the latest Mini that we have just road tested are minimal. Instead of making exterior changes, technology and infotainment have received major upgrades based on those introduced in recent years on BMW’s own models. Though to assist those who are right into customisation, a new palette of colours and trims have been introduced.

STYLING
There’s a fascinating 3D design of the Mini logo, used not only on the exterior of the car, but also on the steering wheel, the dashboard, key fob and the projection lighting.

New design LED lights are standard on the Cooper S – the model we test – and on John Cooper Works. The LEDs are integrated into the main headlight fitting and increase both low- and high-beam range.

An optional adaptive LED system using a matrix high beam function that adapts to the road ahead was on our test car and certainly made night driving safer and simpler.

Highly distinctive Union Jack styled taillights on Cooper S we drove became talking points with the occupants of following vehicles. There are also Union Jack motifs on the dashboard. 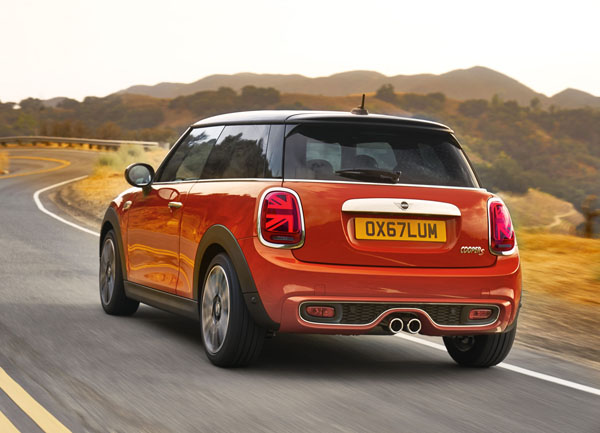 INFOTAINMENT
The updated Mini sees the introduction of Mini Connected that uses a touchscreen interface and the 4G network. Though the touchscreen sits in a huge round area in the centre of the dash the screen itself is tiny at just 6.5 inches.

The Mini Connected App provides send-to-car that uses your calendar and contact data. This can be use for navigation with the car suggesting departure times based on current traffic information.

The TeleServices system communicates with your Mini dealership to share service requirements. It sends a message to let you know when a servicing is required.

POWERTRAINS
While the MY19 Mini’s engines don’t produce any more power or torque than in the supersede car, but careful internal revisions have taken out a little weight to improve their ability to quickly pick up revs.

The Cooper S has a 2.0-litre four-cylinder turbo-petrol unit that produces 141 kW of power and 280 Nm of torque.

Transmission options are either a six-speed manual gearbox or a sports-tuned seven-speed dual-clutch automatic with paddle shifters for additional control. The JCW’s dual-clutch includes launch control to minimise standing-start times.

Interestingly the JCW has an eight-speed sports conventional automatic rather than a DCT. 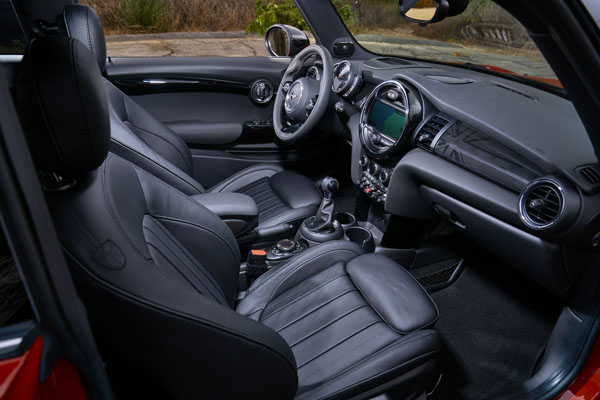 DRIVING
The words ‘go-cart handling’ have been used in every conversation about Minis I’ve ever had since first owning one in the mid 1970s, and I used it again last week while describing the updated for 2019 model to a car-mad neighbour.

Steering and handling let you use a combination of the throttle and steering wheel that’s all-but intuitive. You really do see a bend and the car and you work together to get quickly and safely around it. If you don’t get a smile on your face during a Sunday morning drive on your favourite challenging road it might be time to have a think about yourself.

The brakes hauled of speed with ease and never showed the slightest sign of fade.

Engine lag is minimal and once it’s passed there’s strong torque that makes light work of hills. If you engage the Sport mode for added fun not only do you get better performance, but also a much improved exhaust note.

The automatic transmission is virtually always in the correct gear, though habit had us probably using the paddle shifters more than they were required. Having said that, there’s no way I would by a Mini of any sort with an automatic…

Ride comfort is generally good, but some hard bumps and dips did find their way into the interior.

Fuel consumption isn’t something that’s generally spoken about when testing a performance car, but efficient engines are often surprisingly economical. Which was the case in the Mini Cooper S. around town and when fanging in the country it sat in the nine to twelve litres per hundred kilometres range. On motorways this dropped to below the sevens.

SUMMING UP
BMW Mini is a delight to drive and to look at. Indeed many spend more time improving the looks to their taste than actually concentrating on the driving. A car for all ages and uses. Love it.