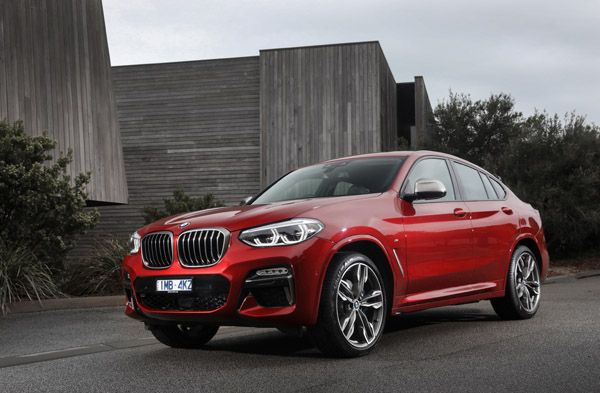 Coupe-styled SUVs are an interesting juxtaposition. On the one hand, their swooping rear end appears to challenge the practical nature of SUVs, yet on the other hand they can and do work. The X4 M40i may be a case in point. With a body somewhere between an SUV and a medium-sized hatch and the heart of BMW’s performance machines, there is little question about its ability to impress.

STYLING
With its sloping back, wide stance and pronounced grille, the BMW X4 M40i cuts an arresting figure. What it lacks in classical lines it makes up for in interest, an approach mirrored by an interior that willingly gives up a little conventionality for superior finish and a driver-centric cabin. We like the detailed stitching on the slim-line dash and the easy relationship between a trendy virtual multi-functional instrument display and the old-fashioned functionality of actual dials for the air-conditioning and radio.

Seating is rather comfortable thanks to well-shaped and bolstered pews with the multi-way electronic adjustment for the driver.

Critics of the sloping roof tend to point to more squashed lodgings in the rear as one of the reasons for their ire, but we had few complaints from average-height adults who had adequate head and toe room even with a sunroof in play. 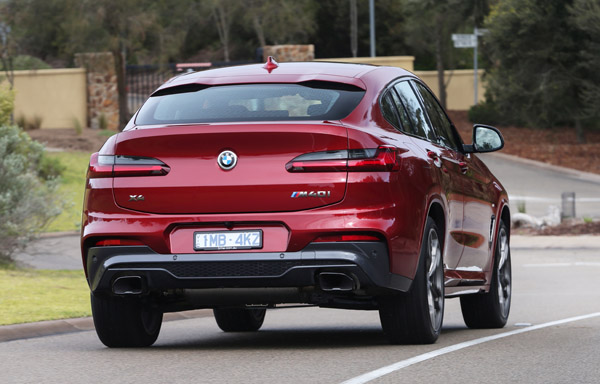 Kids, of course, slide in with ease but even with little people, we would say the back seat is better for two than three, mostly because the passenger forced into the middle may find the seat is tad on the hard side. There are IsoFix couplings on the outboard seats if you need them.

Storage options are handy with cupholders and water bottle room for both front and rear seat occupants and a number of hidey holes to stash your other valuables. The boot is a very usable 525-litres, extending to 1430-litres with the one-touch rear seats folded flat. Granted, it is a little less than the BMW X3 on which this SUV is based, but not much. 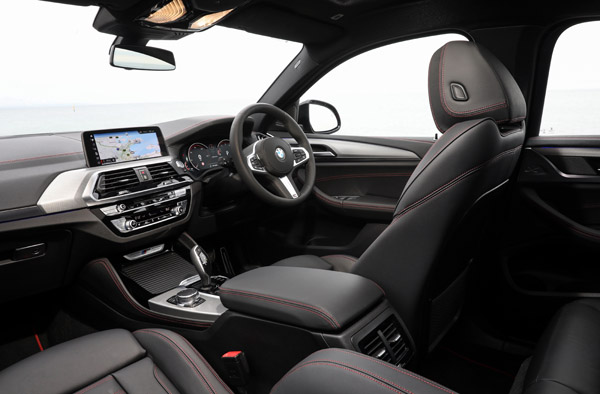 INFOTAINMENT
The X4 M40i features BMW’s latest Connected Drive system with a 10.25-inch colour touchscreen controlled by a rotary controller at the bottom of the console as well as voice and gesture commands.

There is digital radio with a 16-speaker Harmon Kardon surround sound system with easy Bluetooth pairing and online services for the first three years. The screen is the interface for the satellite navigation system and reversing camera with crystal clear 360-degree views. The system is easy to use and quick to respond with the excellent graphics quality even at night.

ENGINES / TRANSMISSIONS
The X4 M40i is powered by a lusty 3.0-litre six-cylinder turbo-petrol engine which delivers 265kW of power and a grunty 500Nm of torque. It is partnered with an almost seamless eight-speed auto which together with the adaptive M suspension and M Sport differential makes for an enjoyable ride.

DRIVING
The X4 M40i is one of those mercurial creatures that offers a comfortable, unfussy ride during everyday tasks but finds extra glow when driven with a touch more enthusiasm. BMW’s all-wheel drive iDrive system keeps the X4 on track and nicely weighted when urgency is needed through the corners or when weather conditions tend to edge on the perilous.

The 3.0-litre in-line six that powers the X4 is a beautiful unit, with its throaty growl announcing your arrival with glee. It’s a pity though that the sound is at its best outside the vehicle with the sonorous quality in the cabin spoilt by obvious artificial enhancement. The X4 accelerates powerfully with little problem from standstill or when overtaking while overall manoeuvrability is impressive for a vehicle of this size.

It can sometimes feel a bit clumsy over bumps and the steering a tad vague and perhaps not the ultimate driving vehicle, but it is comfortable and easy to drive with enough of a fun streak to keep you motivated.

Visibility is good, helped of course by the higher seating position and most of the hindered view caused by the sloping rear window is somewhat circumvented by with the 360-degree reverse camera.

The X4 has a restrained thirst – with our figures of 10.5L/100km close enough to the official 8.9L/100km for the latter to remain useful. Buyers can count on a three-year unlimited kilometre warranty and a choice of two service packages – basic services for five years or 80,000km for $1495 and a more substantial package for $4400.

SUMMING UP
We loved our week in the X4 M40i. We found the comfortable ride, willing nature and luxurious surrounds the perfect complement to a crazy family schedule. True, there are those that find its shape a touch polarising but we chose instead to enjoy its delights and were beautifully surprised. You will be too.

WHAT WE DIDN’T:
Steering could have more feel
Restricted headroom in rear for taller passengers