Audi A7 Sportback generation two has arrived in Australia, but at this stage only the topline model, the 55 TFSI is here. It’s the subject of this review and we have done extensive test drives of several cars.

Audi A7 has long been one of our style favourites and it was great that Audi brought chief designer Andreas Koglin to Australia for a detailed explanation as to how he achieved the shape. (He also gave we journos some ideas on how to sketch cars on paper. Mine looked only marginally more realistic than those I produced during boring hours in primary school…)

While the gen-two Sportback follows a familiar theme it takes a more aggressive styling, with a wider grille featuring sharp angles. The grille is flanked by HD matrix LED headlights and there are large air intakes on each side of the grille.

The A7 Sportback’s sleek silhouette begins at the domed bonnet and follows through all the way to the long tail with its full-width lights. 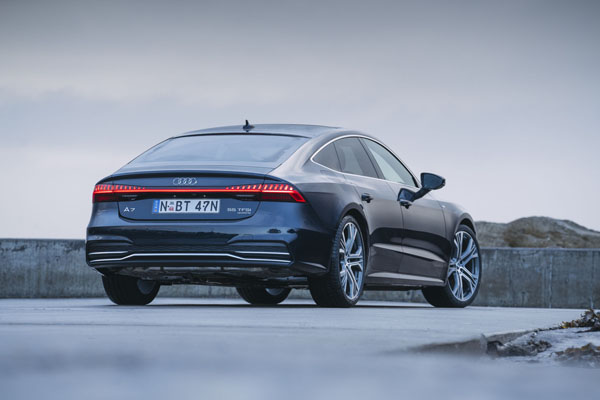 Audi interior design is excellent, clean and uncluttered, with high quality materials and details that tie everything together beautifully.

An easy-to-read instrument display features the virtual cockpit to give different views as decided by the driver to suit the conditions.

Dual touchscreens (10.1- and 8.6-inch) are neatly integrated into the black dashboard design with its ultra-wide style that neatly frame the air conditioning outlets. 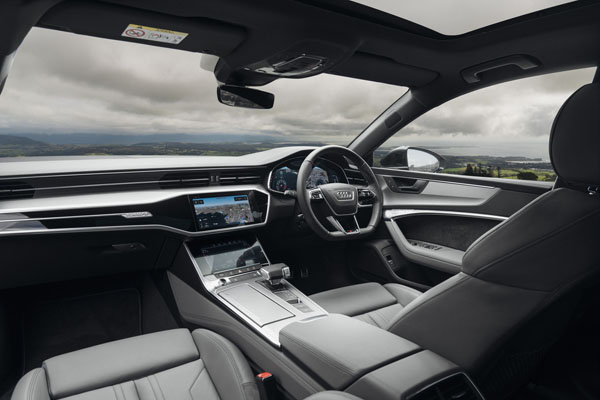 Safety items are extensive, with many features that do their best to avoid a crash. These include pre-sense front and rear, active lane keeping, Audi Assist for side, cross traffic, collision avoidance and intersections.

A popular option is likely to be the $8000 Premium Plus package that has adaptive air suspension, 21-inch alloy wheels in, a panoramic glass sunroof, privacy glass, extended upholstery package, four-zone climate control and the LED colour interior lighting package.

Quattro all-wheel drive is standard across the new A7 range and we were most impressed by the handling and overall feel during an excellent test drive from Brisbane that was arranged by Audi as part of the media launch. It took us through endless suburbs then out into the beautifully hinterland areas and finally back to the airport.

The A7 Sportback’s front seats are large and support nicely without being over aggressive. Rear legroom is greater than in the just superseded A7 but may still require some discussions between the front and rear occupants.

Headroom in the front is fine but may be marginal in the back if you are tall in the body, but keep in mind the beautiful coupe-like shape and that Audi also sells A6 and A8 models. Three kids can be carried in the A7’s backseats, three grownups will find it rather tight.

Our first drives were in the two-wheel steering A7 that immediately impressed us with its feel and virtually instant reactions. Handling was neat and made the big Audi feel smaller than it actually is. Which is always the sign of a car that correctly sorted.

If anything the all-wheel steering car is even better, though we feel the day-to-day driver would be able to immediately feel anything was different.

Handling is impressive with the big coupe able to corner at speeds well over those recommended by signs without any sign of getting into trouble. And if you do get it wrong Audi’s electronic aids will do their best to sort things out.

As a motorway cruiser it’s almost stealthy quiet inside and normal country road are only a little noisier in the cabin. Some harsh road surfaces do bump it about but on the whole the suspension is suited to rough n’ ready Aussie backroads.

Torque is there for the asking after a period of minimal turbo lag and gets the big Audi up and shifting in a safe manner thanks not only to the engine but also the fast acting automatic transmission.

Audi A7 Sportback is an excellent machine that can be used as a family car or a two-person cruiser. We can’t wait for the lower cost variant to arrive.