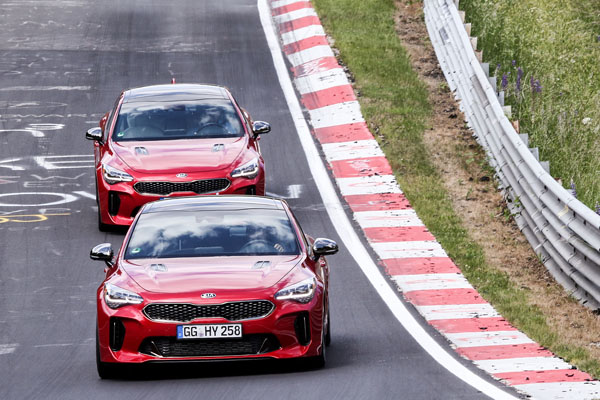 Kia is continuing its drip-feed of information on its Stinger to the local media, now providing details of equipment levels of the eagerly awaited three-model range that’s due to be launched in mid-September.

The South Korean auto maker is very keen to attract buyers who once bought high-performance V8 versions of the Commodore and Falcon.

It also has an eye on the performance all-wheel-drive models in the upcoming 2018 NG Holden Commodore, though these won’t be directly comparable to the Stinger.

All of the first Kia Stingers will be powered by a 3.3-litre V6 bi-turbo petrol producing 272 kW of power and an impressive 510 Nm of torque.

This is taken to the rear wheels (yes, the rear wheels, excellent!) through an eight-speed automatic transmission and a mechanical limited slip differential.

Kia has timed this engine at 4.9 seconds for the all important zero to 100 km/h acceleration test. This requires engaging launch control electronics, again a feature of all models.

MODEL RANGE
Kia Stinger S comes in at a pretty modest $48,990, plus on-road costs. It has 18-inch alloy wheels with 225/45R18 Continental ContiSport Contact 5 tyres on all four wheels. 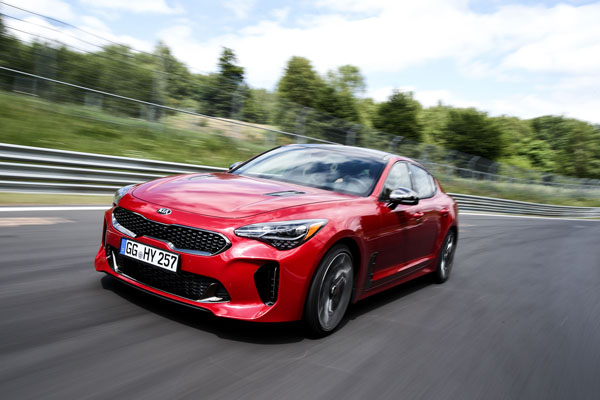 The driver has an eight-way powered seat, while the front seat passenger doesn’t get a powered seat there is six-way manual seats. Artificial leather is used on the trim.

The Stinger Si has an advanced smart cruise control system. Its infotainment system moves up to an 8.0-inch touchscreen. There’s a nine- speaker audio that includes two under-seat woofers. Stinger Si will feature an active sound system that we are looking forward to hearing.

Kia Stinger GT is priced at $59,990 and gets GT electrochromic door mirrors, LED headlights with automatic levelling and a powered sunroof. It has two bespoke colours: Aurora Black and Snow White Pearl.

The GT gets real Nappa leather seats with GT logos and there is suede in the roof and pillar trims. Added comfort is provided by variable lumbar support, a powered bolster adjuster and an under-thigh extender.

The steering wheel is flat bottomed, there are alloy sports pedals. There is also a wireless phone charging capability.

Note that Kia prefers to call Stinger a grand tourer rather than sports sedan. Perhaps that’s a hint a sports sedan with even more grunt will come later.

Stinger is also sold with a four-cylinder turbo engine, we all cover that later.

A complete specification list will be released at launch of the Kia Stinger on a three-day (yes, three days!) event beginning on September 18 in Canberra. We have an invitation to this and will publish details and drive impressions immediately afterwards.