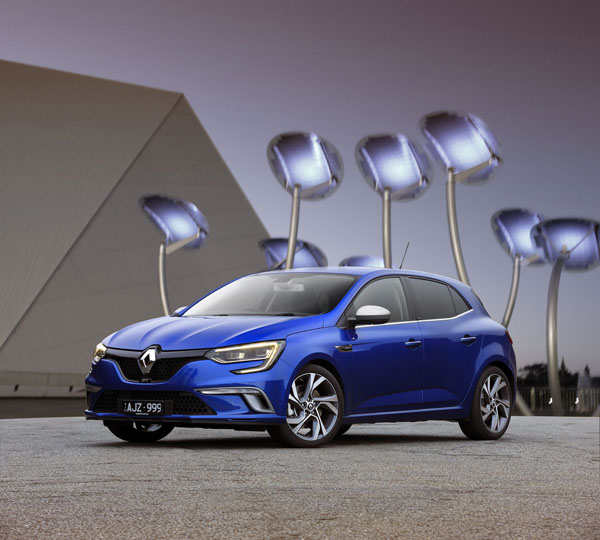 The Renault Megane GT is the range topper of the new Megane range, at least until the much anticipated RS arrives on these shores next year. The warm hatch is presented as a performance slanted, but more practical, replacement for the Megane RS275. The latter, if you remember, was a manual, two-door offering that excited the real drivers amongst us but had limited lustre for buyers with conflicting priorities.

Renault has spruced up the design of this fourth-generation Megane, dropped the price and tweaked the drive in the hope it will resonate more strongly with Australian buyers.

To help combat the perception that French cars cost a mint to maintain Renault Australia is offering the Megane with a five year unlimited kilometres warranty and full roadside assist and capped price servicing for three years. Service intervals are 12 months or 15,000km.

STYLING
The French pride themselves on delivering products that set them apart from the norm. The GT sits low and wide on its 18-inch alloys, with curvy hips, sporty nose and sculpted flanks hinting at the fun that can be had. A sharp LED headlight design, chrome and silver highlights and dual exhaust tips complete a distinctive, edgy look that sets it apart from competitors. 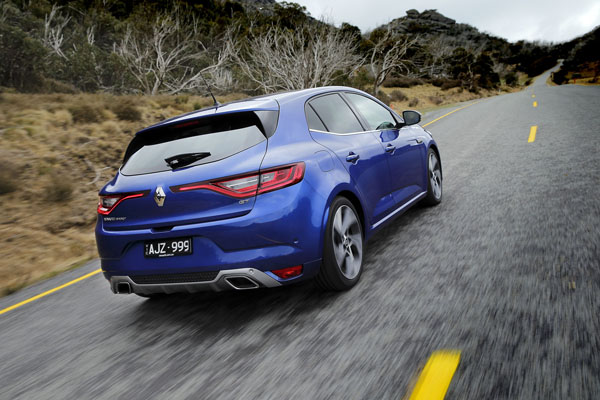 The Megane GT boasts an airy, well-appointed cabin with the black and blue sport-style bucket seats offering the comfort and support you need for a spot of energetic driving. The blue is echoed in the contrast stitching on the steering wheel, in the ambient lighting, as a backdrop to the instrumentation and in the tint of the carbon fibre trim too, which not only lifts the ambience of the cabin but also gives it an air of the different.

The finish can feel a little bit of an oxymoron at times with soft touch plastics and top-notch finishing sitting alongside cheaper, easily marked materials and tardy shortcuts in adapting the European car to a right-hand drive market.

INFOTAINMENT
The optional 8.7-inch portrait touchscreen in our test car dominated the dash, looking completely at home in the sleekly integrated design. It is responsive and offers good graphics quality but is not as intuitive as units that mirror the smartphone software we have become so accustomed to. Still, it becomes easier to operate with time – except for the volume controls along its side, that is. They may look smart, but along with fan speed adjustments, are difficult to use on the move. 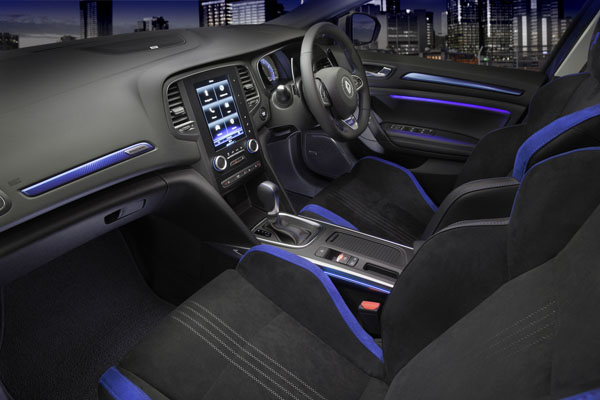 ENGINES / TRANSMISSIONS
The Megane GT uses a 1.6-litre turbo-petrol engine tuned to deliver 151kW of power (6000 rpm) and 280Nm of torque from 2400 rpm. It is a responsive little number. It is partnered with a seven-speed dual-clutch auto which works to keep it moving along smoothly. No manual option unfortunately, you will have to wait for the arrival of the Megane RS early next year for a stab at that.

SAFETY
Megane GT is equipped with six airbags, traction and stability control and reverse camera with front and rear sensors. Surprisingly, there is not autonomous emergency braking or adaptive cruise control in Australian models yet.

DRIVING
Let’s be honest, it takes a hot hatch to really get the pulse going, to feel the excitement building in the pit of your tummy and that undeniable boost of adrenalin as your foot hits the accelerator and the car launches ahead.

A warm hatch, like the Megane GT, can’t replicate that exhilaration in spite of its racing-style seats and sporty interior. What it can do, however, is offer up a fun and involved drive, one that has you taking the longer way home, perhaps through a few twisties to really let it sing.

The Megane GT is a measured performer, the reality of its push exceeding its power figures. Decent mid-range torque helps it along and it certainly doesn’t feel hesitant when you ask the question. Sport mode adjusts the steering, throttle input and engine response and was our pick for the week although a growlier exhaust note wouldn’t go astray.

You have the option of steering paddles, too, should you want to be more involved in the driving experience. Unfortunately, the paddles are oddly shaped and are not really comfortably placed making them a bit cumbersome to use, with the gearbox’s penchant to shift up automatically if you try to hold on to a lower gear, also detracting from the appearance.

The new suspension setup gives its more control and agility, while the nifty 4Control four-wheel steering improves flexibility and handling, allowing it to duck into corners easily and giving it stability while travelling at high speeds.

Below 60km/h the rear wheels turn in the opposite direction to the front, making the car feel better balanced and supporting quick changes of direction. You will notice it especially as you effortlessly squeeze into tight parking spaces and easily negotiate cramped city traffic and roundabouts.

At higher speeds (above 60km/h) the front and rear wheels turn in the same direction for more assured highway driving.

The GT is sure footed and fairly comfortable over bumps and ruts, niggling a bit but not enough to irritate, but cabin noise can be a bit loud on coarse bitumen.

At 434 litres the boot is pretty handy, deep enough to hold the weekly shop along with a schoolbag or two, but not long enough for Daughter No 1’s three-quarter sized cello though. A 60:40 backseat split can help with problems like those, although they don’t fold flat.

Lodgings for rear seat passengers are comfortable enough provided you limit it to two and they tend to be of the child variety. Of course, adults will fit too but they are likely to find their knees touching the seats in front. There are air vents back there which is a plus, as are the handy map pockets, two Isofix points, the middle armrest and door bins deep enough to be useful.

Not so useful are the front cup holders. They are oddly sized and not deep enough to hold that much-needed takeaway coffee without a degree of precariousness – perhaps not a problem in your life, but definitely one in mine.

Renault claims a combined fuel economy of 6L/100km and although ours was closer to 7.2L/100km during our week, that did comprise of more short spirited drives than long trips.

SUMMING UP
With classy good looks and a responsive involving drive, the Renault Megane GT is one to consider. Competitive pricing, an excellent warranty and an expanding dealership network also add to the allure. This is a fun car, not without its idiosyncrasies mind you, but we love the French for that. They certainly add a touch of sparkle for buyers looking for something a little bit different.