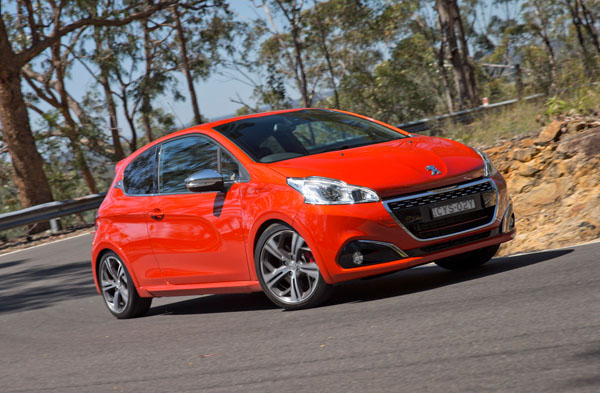 The Peugeot 208 range hasn’t exactly set Australian sales charts on fire, but has been a fine return to form for the French manufacturer after a couple of duffers.

Its top-of-the-range 208 GTi has received plenty of attention for the most convincing attempt to reboot the beloved 205 GTi. However not every wants, or can afford, that range-topper. So Peugeot has sent the 208 Allure to finishing school to create a more affordable model called the GT Line.

Not surprisingly, the price is almost the same as Peugeot’s rival the Renault’s Clio GT.

Metallic paint is a $990 option and there’s the $1050 option of textured matte paint which Peugeot says is low-maintenance.

The optional Active City Brake feature ($500) also includes reversing camera which is $300 on its own.

DESIGN
The 208 GT Line, as the name suggests, is well on its way to looking like a GTi with 16-inch alloys, a lower stance and the tell-tale bodykit and LED daytime running lights. The grille is flecked with red flashes for what Peugeot tells us is an “equaliser” effect and there’s various chrome and red bits to sort the GT from the lower models.

The windscreen is gigantic, soaring up to your forehead (and further if you have the panoramic roof), with the high ceiling delivering a ton of headroom. Inside space is impressive for such a small car, with a decent-sized boot at 311 litres.

The sportier, more heavily bolstered seats are still very comfortable, with a wide range of adjustment to help you get comfortable behind the i-Cockpit, which consists of high dials and low steering wheel.

As in the 308, the steering wheel is very small indeed so you can see those dials, but is off-putting to some. It takes a while to get the position right.

The rear seats are comfortable enough, but the rear seat is tight for leg, knee and shoulder room. Storage is limited, with a pair of small cupholders up front and a bin hidden underneath the rather inconveniently-sited central armrest.

INFOTAINMENT
The seven-inch screen is bright and clear but is still slow to respond to your inputs and isn’t exactly the last word in ease-of-use or up-to-the minute design.
The screen takes care of not only sat-nav and stereo but also the full trip computer and climate control. There’s a lot going on there and it would be fine if the screen wasn’t so slow to respond to your fingers.
The sat-nav is pretty good if not highly-detailed or high resolution and the stereo, once you’ve worked it out, delivers good sound and works more than happily with your Bluetooth or USB-connected phone.

ENGINE / TRANSMISSION
The GT-Line shares the Puretech 1.2 litre turbocharged three cylinder with the Active and Allure. The triple pumps out 81kW and 205Nm (why not go for 208? Just for laughs?), the stop-start helping with a combined claimed fuel-consumption of 4.5 L/100km. Which is…well, unlikely to be matched seeing we got 8.2 L/100km, admittedly in an especially sticky week in a Sydney summer.

The GT-Line reaches 0-100km/h in a leisurely 10.9 seconds, the six-speed transmission’s shifts fast and smooth.

DRIVING
A standard 208 is close to, if not the benchmark for ride and handling in its class. The standard GTi is the best riding hot hatch in the world even if it doesn’t have that ultimate handling ability (which few owners will ever use) of its Renault, Ford and VW rivals.

The GT Line chassis falls in the middle of the standard and GTi tunes and is all the better for it. The tauter chassis further sharpens the already-excellent steering and the fast-responding throttle and transmission make the 208 feel a lot more sprightly than its 0-100km/h figures suggests.
The three-cylinder’s growl is as enjoyable as ever and is a good soundtrack to your hard work if you’ve pointed the car down the inevitable winding road. There’s plenty of grip on offer, way more than the engine could ever overwhelm but at the same time, it’s a terrific amount of fun.
That extra handling ability doesn’t ruin the ride but it does give it an edge, with body roll almost eliminated. The larger tyres are also a little noisier, but again, if you like a bit of fun, it’s all worth it.

SUMMING UP 3.5/5
The GT Line is a terrific addition to the 208 line-up, a warm hatch for those who don’t want or need (or can’t have) the GTi thrills. Even if you’re not a petrolhead, the GT Line comes with plenty of useful features but you might just have to ask yourself if $27,490 for a 208 is worth it.