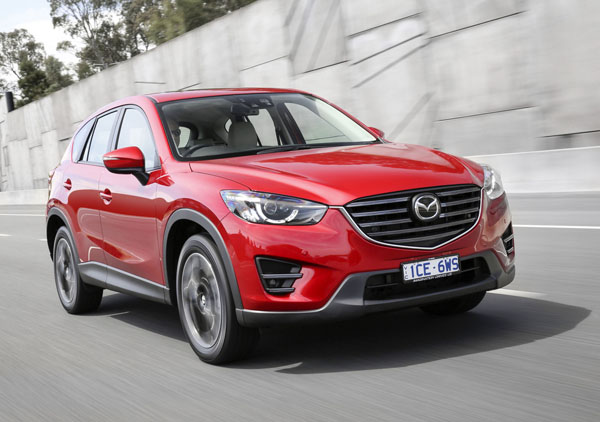 If you’re over a certain age, it still seems weird that an SUV from Mazda, a company with basically zero off-road cred, tears up the sales charts in its segment. You can understand the Mazda3, the Japanese company has decades of tidy, good-looking sedans and hatchbacks in the back catalogue, but an SUV?

Yet, here we are. The Mazda CX-5 is a strong seller, giving the Toyota juggernaut a blood nose while fighting off cheaper Korean competition and expensive Euros.

VALUE
Mazda CX-5 Grand Touring is the last stop before the top-of-the-range Akera. In petrol form, the GT lightens Treasury with a $43,390 price tag.

Another $200 adds Mazda’s lovely Soul Red and the Safety Pack increases the bill by a further $1060.

DESIGN
The CX-5 is so Mazda it almost hurts. With its cats-eye headlights and hook-shaped LED running lights, five-pointed grille and Kodo design language, it doesn’t need the badge. It gets one anyway, mounted on the black grille slats. Overall, it’s a terrific design and must be one of the best-looking SUVs on the market.

The big 19s fill the arches well without destroying the ride and as is common across the range, there’s little in the way of blingy chrome. 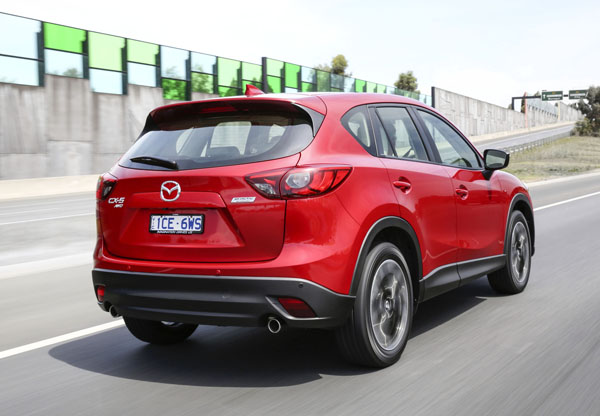 The side profile, as with most mid-sized SUVs, owes more to big hatchback than blokey off-roader and is all the better for it. The only downside is the slightly narrow rear door opening, meaning squishy access to the roomy rear bench.

Inside is slick and well-constructed but innovation isn’t its middle name. It’s a car designed to handle family duties, so is littered with storage cubbies and bins for the modern family’s ever-expanding detritus.

Mazda resisted the urge to put the stupid dashboard from the 3 in the CX-5, going with a conventional two dial setup with ancillaries either side.

The reasonably-priced optional Safety Pack adds forward collision braking, blind spot sensor, cross traffic alert and reversing crash mitigation, all for $1060. For that price, you’d be mad not to get it. Conversely, for that price, it could probably be standard. 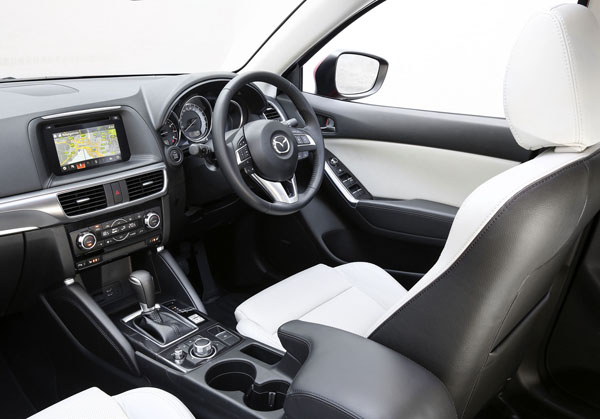 INFOTAINMENT
The GT gets a premium sound system, according to the spec-sheet, with nine speakers and a separate amp. It’s all controlled through the MZD Connect screen which also handles the (above average) sat-nav and phone duties. Bluetooth and USB are present and correct and you can also bridge your car to the internet using your mobile, for reasons that are not immediately apparent.

Sound is very good through the speakers with a decent bass response and good top-end.

ENGINE / TRANSMISSION
The Grand Tourer is powered by a 2.5 litre SkyActiv naturally-aspirated four cylinder. This engine is found in both the Mazda3 and the ‘6. The 138 kW and 250 Nm look a bit skinny until you see that the kerb weight is 1627 kg, which is about 100 kg lighter than some of the competition.

Mazda claims 7.4l/100km on the combined cycle. We got 9.2l/100km in mostly urban driving, so not too bad. Mazda’s six-speed transmission and i-Stop help keep the consumption down but as with the ‘6 and ‘3, you really have to push the brake pedal to activate the latter feature.

DRIVING
The CX-5 has long had – and deserved – its reputation for having a great chassis (for an SUV). You won’t be blowing any hot hatches away, but with all-wheel drive grip, good steering and responsive engine, you can have a bit of fun at the wheel.

The 19-inch wheels fail to ruin the ride, which is already reasonably firm (to go with the front seats), so there’s no need to be worried on that score. The GT handles the bumps and thumps of Sydney roads and shopping centre car parks with little fuss although sharp frequency bumps will send a decent thump through the front suspension.

It’s a very comfortable car and the more time we spent in it, the more we realised why this car continues to sell in strong numbers. Some cars impress in the run around the block from the dealership, but the more miles that pass under the high-riding CX-5, the better it feels.

The driving position is just right, the seats supportive and everything is to hand. The only blight was the time it takes the stereo to recognise a USB-connected iOS device, a problem we’ve seen in other CX-5s but not other Mazdas.

SUMMING UP 3.5/5
It’s reasonably difficult to fault the CX-5. If you get a bit happy with the throttle pedal, you will be heavily penalised, but backing off brings instant results. It will carry a family of five, but you’ll have to upsize when the three bairns become lanky teenagers, but if you’re relying on the car for short-haul, they’ll live.

It feels good, is very well built and despite its initially stiff-looking price, is actually ver competitive because of all the gear and startlingly cheap options. While the diesel is swifter by a reasonable margin, that’s not the be-all and end-all of the CX-5 – it’s a very well-sorted urban runabout.