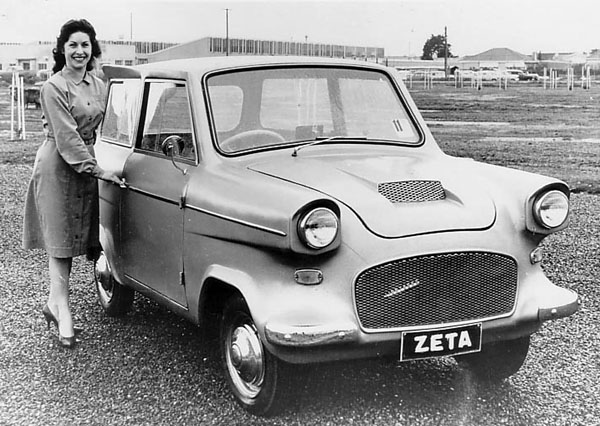 The unorthodox-looking Zeta saloon was a multipurpose Australian family car using a mixture of locally made and imported parts.

Produced in Adelaide by Lightburn & Company Ltd from 1963, it was made in small numbers until 1966.

The Zeta was claimed to be the first vehicle sold in Australia which combined the attributes of a sedan, wagon and light delivery truck. Its two-door fibreglass body was an ungainly but ingenious design with seats which could be folded flat or quickly removed to provide a large cargo area. The seats could also be fitted to the roof to provide a grandstand view at sporting events!

The low-priced four-passenger car weighed only 436 kg. Power came from a Villiers 324 cc two-stroke engine driving the front wheels through a Burman motorcycle gearbox. The wheelbase was 1.88 metres. Handling was nervous at best.

Harold Lightburn, whose main business was producing car jacks, concrete-mixers and power tools, announced ambitious plans to build 50 Zeta cars a week but only 363 were made over a three-year period.

In 1964 a two-seater Zeta sports car was also built by Lightburn. The Zeta Sports was powered by a 500 cc two-stroke engine made by the German FMR company. The engine developed 16 kW, giving the Zeta a claimed top speed of 120 km/h.

Only 48 Zeta Sports were made.