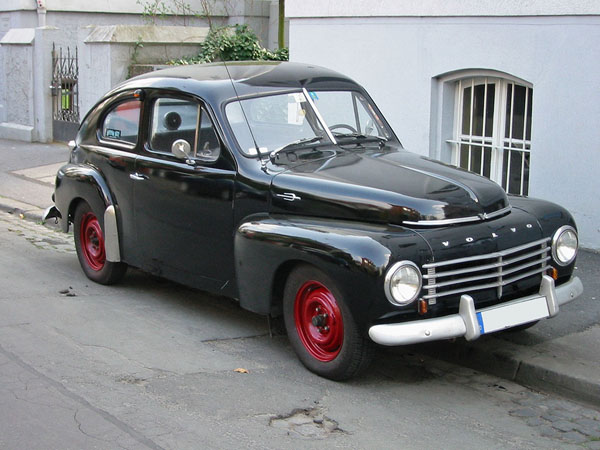 The 1950s began successfully for Volvo. For the first time since its foundation, the Company had in the PV444 a car which not only could be mass produced, but was so popular that demand greatly outstripped the available supply. Difficulties were still being experienced in obtaining supplies of materials such as sheet steel, and there was considerable uncertainty as to how the car market would develop during the period ahead. Would there be a trend towards bigger cars or would smaller cars such as the PV444 continue to be in strong demand.

The PV444 used a four-cylinder, in-line engine with 78 x 80mm cylinders giving a total capacity of 1414 cc. Although the bore was exactly the same diameter as the previous Volvo model, the stroke was 30mm shorter, and the engine – known as the B4B – was the smallest ever made by the company up to that time. Some of the engine design was obviously inspired by an inspection of the Fiat 508C. It had a three bearing crankshaft incorporated with four counterweights. Although all previous Volvo engines had been side-valve types this was the first overhead valve type.

The front suspension, which was designed along American lines, was based on that used on Plymouths of the time, but scaled to the proportions of the Volvo. The upper suspension arms were half the length of the lower arms and the live rear axle was sourced from the USA. Brakes were of an ample size for a car of its dimensions and were of the same size and type as those fitted to the Studebaker

With a few rare exceptions, the PV444 was available only in black with a yellow and green interior. The PV444AS was finished in a new shade called dove grey. This special model was fitted with overriders on the bumper, stainless steel trim, and special `lifting handles’ on the sides of the bonnet. The rear lights were located somewhat higher up and the wheels were fitted with stainless steel trim. The Polish-made upholstery fabric in the A model was replaced by the Swedish made red and grey striped material which was used for some time in all special models.

In general very few changes were made on the various models from year to year. However, these were sufficiently attractive to encourage many owners to consider trading up to a new car. The PV444D and DS, which appeared in 1952, were equipped with Bosch electrics instead of Autolite, had modified steering and a specially-designed heater as an optional extra.

In 1956 Volvo went more aggressively into exports and whilst the initial going was slow they gradually established a small foothold in the USA. As they expanded markets the PV444 proved more and more popular and with over 100 US dealers Volvo soon occupied second place among imported makes in the Western states.