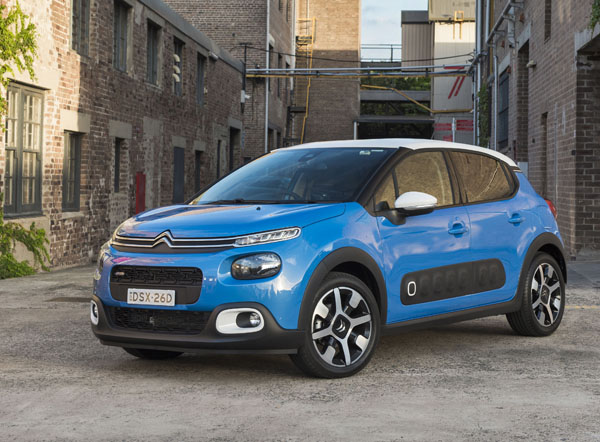 The Citroen C3 may be light-on in variants, but the new French compact, which comes to market in a single version, the Shine, has striking looks, cost savings and the chance to match the buyer’s own personality.

With a skinny sticker price of $23,490, plus on-roads, the hatch is straight from the ‘Do you want fries with that?’ design school and while as a main dish may seem meagre, it comes with an optional ‘sides’ menu of lip-smacking proportions.

For starters there are 33 exterior colour combinations, three interior ‘moods’ and ConnectedCAM, at $600 extra, the first factory-fitted ‘dash cam’, that can upload content to social media.

STYLING
Styling and practicality don’t always go hand in glove in the car business. Think white leather. However, the Citroen Airbump, air filled panels with scratch-proof surface, along both sides of the vehicle, are a perfect stylistic fit for the C3 Shine and provide welcome protection against scrapes and nudges from outside the vehicle. 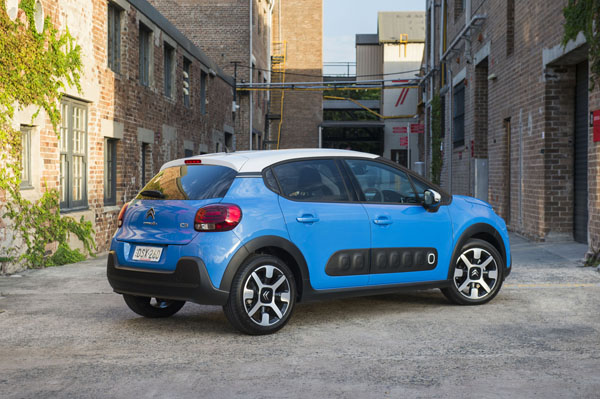 The design has taken on a new look without ignoring features that made its predecessor so popular. Front on the C3 fits with its robust intent, the signature twin chevron taking pride of place flanked by a two-tier front light set-up reinforcing bonnet height, while the double chrome bar underlining the chevron badge runs through to the LED daytime running lamps, enhancing the width.

A floating roofline is enhanced by black windscreen pillars, body surfaces extending downwards over large-diameter wheels. At the rear, muscular wings give the car a creature-of-prey appearance accentuated by short overhangs.

The car, as a whole, lends itself to customisation, including no-cost options such as 17-inch diamond cut black alloy wheels, body-coloured roof and white or red two-tone roof.

INTERIOR
The cabin is meant to feel like a home away from home for the driver, designers drawing on the worlds of architecture, furniture and decoration. No clutter, consistency and full, soft shapes are the key.

The dashboard design features trim that adds a feel of width to the cabin. Buyers have a choice of finishes – paint, textile or TEP lining, ordered with or without overstitching, and offers a choice of chrome or colour surrounds. 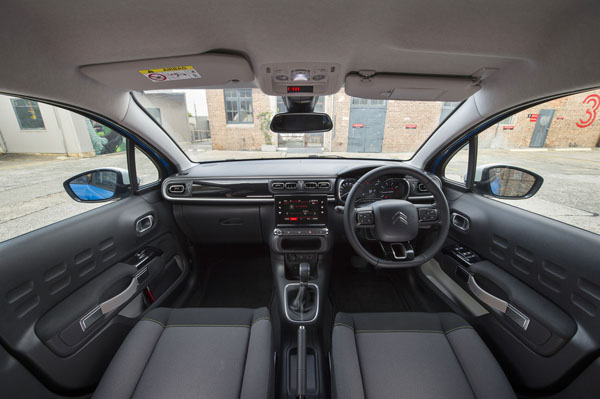 It also matches the seat material that has a deliberately non-automotive look and feel, for a coherent interior in a choice of three moods – standard, Urban Red or Hype Colorado.

INFOTAINMENT
The new C3 Shine presents the world première of Citroen ConnectedCAM, a fully-integrated HD camera system that films on-road experiences for immediate sharing on the social network, or for subsequent viewing, for example as evidence in the event of an incident. In a crash the camera automatically goes into action.

A 7-inch touchscreen gives access to a range of safety, phone and media functions including Apple CarPlay and mirror screen, which duplicates the driver’s smartphone screen on the central display.

ENGINES / TRANSMISSIONS
The C3’s 81 kW version of the turbocharged 1.2-litre PureTech e-THP engine is the same three-cylinder unit found in a variety of vehicles including the recently updated Citroen Cactus and has been put through rigorous testing involving more than 25,000 hours on the test bench and four million-plus kilometres on the road.

Mated with an electronically-controlled, six-speed automatic gearbox designed and developed in conjunction with Aisin, gear changes are 40 per cent faster than those of previous gearboxes, runs more smoothly, while higher gear ratios maintain start-up performance and decrease engine speed at higher vehicle speeds.

SAFETY
The C3’s standard lane departure warning helps guard against driver inattention at speeds above 65 km/h, giving audible and visual warnings if the car crosses a lane marker line without the indicator being used.

Driver attention alert tells drivers when it is time to take a break, the system activating after two hours of uninterrupted driving at speeds above 70 km/h, then on the hour.

Across the range, hill start assist makes setting off easy when parked on an incline, holding the car for two seconds after the brake pedal is released on slopes with a gradient of more than three degrees.

Static cornering lights provide an additional beam of light to illuminate the insides of bends at corners and junctions. Depending on the steering wheel angle, the fog lights are activated in conjunction with the low-beam headlights, covering an angle of up to 75-degrees on either side of the vehicle. This works at speeds up to 40 km/h.

DRIVING
For a small car the cabin is quite spacious with 1379 mm of shoulder width (up 20 mm on the previous model). Rear seat legroom is also generous, the positioning of the front seats and the shape of their backrests bringing the rear-seat passengers nearer the front for a friendlier atmosphere.

The 81 kW of power, on tap well up the rev range at 5500 rpm, requires the engine not to be spared and handles stop-start city driving with an average load. This might not be the case with five hulks aboard.

The C3 rides out minor road surface blemishes with smooth confidence but the suspension does let occupants know of any major pot holes. Steering is light but direct and body roll not an annoyance. Disc brakes do the job well.

Designers, it is said, paid special attention to storage with a centre-console designed to make the most of space at the front of the vehicle. The front doors also feature large spaces in a light colour to avoid blending in with contents and boot capacity is a useful 300 litres.

SUMMING UP
The Citroen C3 Shine is a striking looking well-specified small car at a keen price, laying down a creative challenge for buyers to stamp their own seal on the vehicle with a shopping list of options. Go for it!