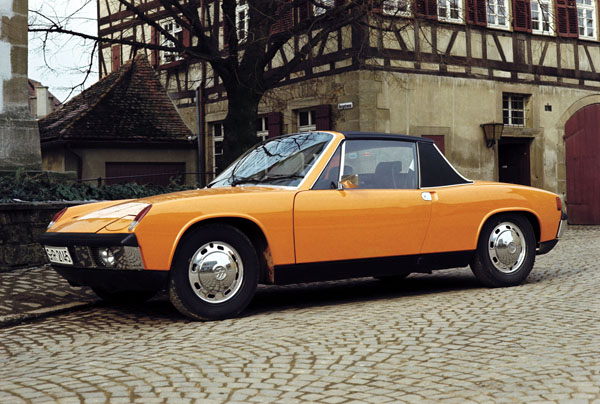 When introduced in 1969 the mid-engined Volkswagen-Porsche 914 showed that the
traditional British roadsters from MG and Triumph had rested on their laurels for too long
and were now hopelessly outmoded. Breaking into the American market had long been
the key to success for any sportscar with sales success in the USA virtually guaranteeing
a profitable production run. By the end of the 1960s Porsche and Jensen both planned to
add cars to that list and both would do so in conjunction with another well-known name.

Volkswagen and Porsche have always been closely linked, with Porsche supplying
engineering know-how and Volkswagen supplying componentry for Porsche’s early cars.
When the six-cylinder 911 of 1963 took Porsche upmarket, the need for a cheaper car was
obvious. But even the four-cylinder 912, which quickly became the most popular Porsche,
was twice the price of the MGs and Triumphs that were snapped up by eager buyers.

Coincidentally VW was wrestling with the problem of slow sales for the Type 34 Karmann
Ghia coupe. A solution soon evolved. Porsche would design a new VW sportscar using
bodies built by Karmann. Porsche could then buy bodies from Karmann at cost, fit their
own engine and create a cut-price Porsche.

Mid-engined designs were taking over on sportscar racing – led by Porsche’s own 904 – so
it was decided that the Volkswagen 411 engine to be used in the new 914 would be
mounted ahead of the rear axle line. Also, suspension would be by 911-style struts and
torsion bars at the front with coils and trailing arms at the rear. To ensure that the new
design was distinct from both existing ranges an outside design consultant with little car
design experience was employed to develop the new car design.

The new car was launched at the Frankfurt Motor Show in 1969. In Europe the Targa-
topped two-seater was sold as a VW-Porsche while in the US it was known only as a
Porsche. Two versions were marketed: the 914/4 which used the 60 kilowatt, 1679cc VW
type 4 engine and the 914/6 with the mildest of Porsche’s 2.00-litre flat sixes, generating
82 kilowatts. The 914/6 lasted only until 1972 when it was replaced by a four-cylinder car –
often referred to as the 914SC – fitted with a 2.00-litre version of the VW air-cooled all-alloy
1971cc flat four engine with single camshaft and overhead valves and Bosch electronic
fuel injection and a five-speed manual gearbox driving the rear wheels. The injected
engine fired easily and idled with a Beetle-like beat but its forceful top end response was
quite something. It could be fitted with optional Comfort and Sports packages which
included alloy wheels, front and rear anti-roll bars, driving lamps, a centre console and
chrome bumper casings.

Unusually it was designed to be serviced from underneath with major jobs requiring
removal of the complete engine, but fortunately this was a relatively straightforward
process. In the US, where price mattered less, the 914 sold reasonably well but in Europe
where it lacked a clear identity it never sold as well as its makers had hoped. Between
1969 and 1975 118,900 914s were built.