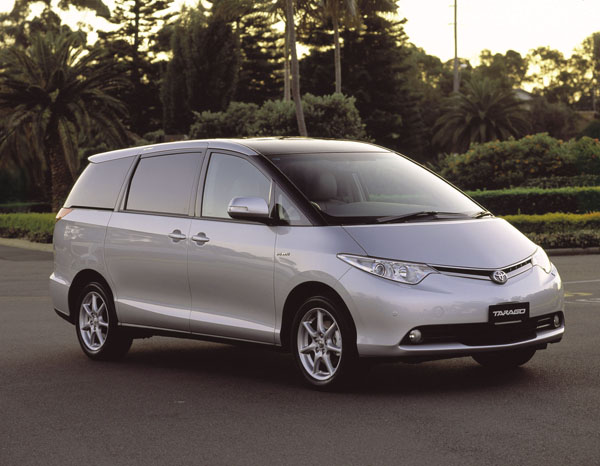 Toyota Tarago has been a favourite in Australia for close to 40 years. First models were really only vans with seats and windows but from 1990 they were purpose designed with all that meant in added comfort, safety and driveability. These are often past their use-by date and so are best avoided unless you can carry out repairs yourself. Spare parts are also likely to be a hassle.

So in this review we will look at the Toyota Tarago from March 2006 that continues to this day with upgrades in February 2009, July 2012 and May 2017 to keep it up to date. Despite this long period on sale Tarago still looks stylish, certainly a long way from the dull n’ boring boxes of its honourable ancestors.

Taragos being reviewed here have conventionally hinged front doors, and sliding doors on both sides at the rear. Seven or eight people can be seated. The seven-seater has two seats in the middle row, the eight-seater has three.

Access to the two rear rows of seats is quite good due to the flat floor, though the roof is fairly low and you may need to stoop. As is usually the way, getting into the rearmost seats can require a bit of contorting but kids won’t have a problem. And as we all know the kids would like to sit as far from mum and dad as possible. Being able to slide the centre-row seat backwards or forwards lets you juggle the amount of legroom in the rear seats.

Luggage space is reasonably good, even with all seats in use. A couple of large suitcases, with smaller items around them can be accommodated without too much of a squeeze. The centre-row seat base can be hinged up against its backrest to give extra luggage space behind the front seats. You can tumble-fold the rearmost seat to greatly increase the volume of the boot. 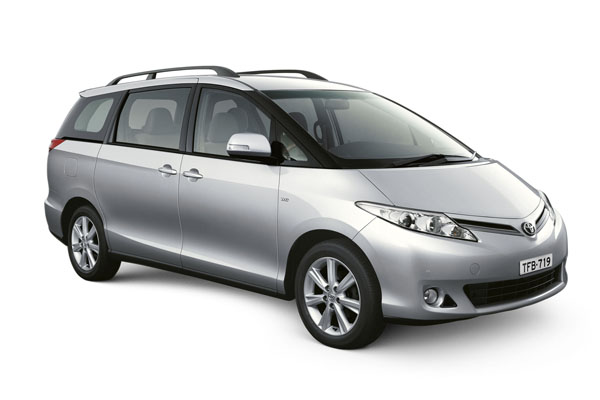 There’s a good-sized underfloor area for items you want to keep out of sight.

Safety was of major consideration during the design of the new Toyota people mover, making it one of the best in its class.

Comfort is generally good, though rough roads may cause the ride to deteriorate. Handling is good, for a people mover, and it’s safe in the way it understeers to push itself back into line if the driver makes a mistake.

Performance from the four-cylinder, 2.4-litre engine is likely to be adequate for most drivers, though the Tarago will struggle on hills if it’s carrying a big load. An ageing four-speed automatic didn’t do a lot for getting the best from the smallish engine. The facelifted 2012 model year saw the introduction of an efficient CVT automatic, it’s still not a rocket but is nicer to sit behind.

A powerful 3.5-litre V6 engine option for the upmarket Taragos was introduced in May 2007. The V6 engine comes with a six-speed automatic and naturally has more relaxed performance and may not use all that much more petrol than a heavily loaded four-cylinder.

Tarago has good resale value so you will pay top dollar for a good one. Hopefully, the extra price when you buy is is still there with it’s time to trade it in. Having it serviced by a Toyota dealer will aid resale price.

Quite a few grey imports of these Toyotas have been brought Downunder. Look for names Previa or Estima on the badges – the Tarago name was exclusive to Australia, being named after the town of Tarago near Canberra. Then again, the original Japanese badges of imports may have been changed to Tarago. 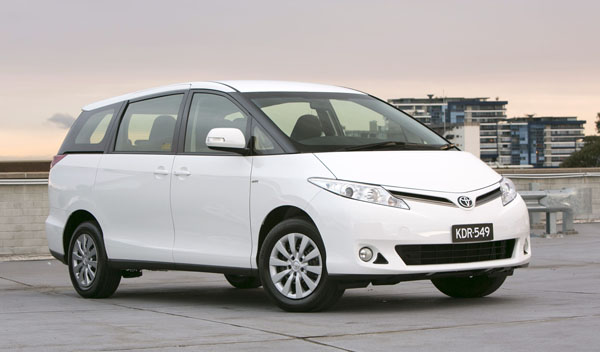 Toyota’s spare parts network is one of the largest in Australia and has operated efficiently for decades. Because of Toyota’s strength in country areas, even in the far-distant bush, availability is excellent. If you do have troubles there are likely to be mechanics with plenty of experience, official or unofficial, on Toyotas.

Toyota Taragos have been a longtime favourite as hotel shuttle buses, airport transfer vehicles and taxis. These may have done some hard work, though to compensate for this they are usually serviced by the book, so ask to see the service records.

Insurance on the Tarago can be slightly more expensive than average but not outrageously so. Shop around for the best deal, but be sure to understand exactly what you are getting for your money.

You may also care to look at the Toyota Spacia, a smaller people mover with quite a few similarities to the Tarago. Unlike the Tarago the Spacia was seldom used commercially.

WHAT TO LOOK FOR
Check the condition of the seats, carpet and trim carefully for signs of heavy-duty usage as it may have been a shuttle bus in its early years.

The engine should start easily. Ideally get to it when it’s stone cold in the morning.

A puff of smoke from the exhaust when a cold engine first kicks over may indicate wear.

Wear may also show up as smoke from the exhaust when the engine is accelerated hard after it’s been idling for a while.

The gearbox or automatic transmission should be precise and smooth in operation, with no crunching from a manual gearbox on fast downchanges.

We have come across more than one Tarago 4WD that has obviously spent time at the beach. Hmm…

Look for rust in the lower areas of the body and in the floor of the cabin and luggage area, though it’s certainly not a common occurrence. Vehicles badly repaired after a crash may suffer from rust.

CAR BUYING TIP
People movers inevitably lead a much harder life than anything this side of genuine 4WDs, so spend plenty of time inspecting them inside and out. And don’t forget a professional follow up.