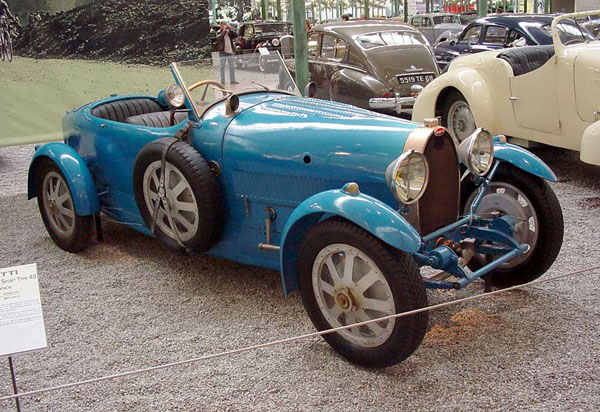 The Bugatti Type 43 used a supercharged 2.3-litre straight-eight engine fitted to a shortened wheelbase ladder chassis developed from that used on the Type 38. In fact the engine also came from another Bugatti; the Type 35B but it was used in the 43 in a slightly detuned form.

The end result was to be the world’s first production car capable of being driven at 160 km/h. In reality it could easily be driven at 176 km/h or even faster if the optional higher final drive ratio was fitted. The secret of its successful performance was the superb chassis, suspension and brakes all being brilliantly engineered to give the car handling and stopping power to match its performance.

The engine developed 90 kW and sufficient torque to enable the car to be driven from a standing start to its maximum speed whilst remaining in top gear. When its four-speed gearbox was used and with the supercharger coming into operation at around 1500 rpm the Type 43 could reach 96 km/h in under 12 seconds and cover 400 metres in only 17 seconds.

The Type 43 had a very firm suspension using semi-elliptics at the front and quarter elliptics at the rear with friction shock absorbers. The cable operated brakes were never matched by competitors and laid out so as to provide a very positive servo action. The car’s handling was as good as anyone would expect from any racing car. In fact it was the epitome of a superbly elegant sports car.

The Type 43 remained in production until 1931, in its later years as an overbodied American-inspired version, the Type 43A. The Type 55, based on the Type 51 racer with a twin-cam engine design, ultimately replaced the 43.