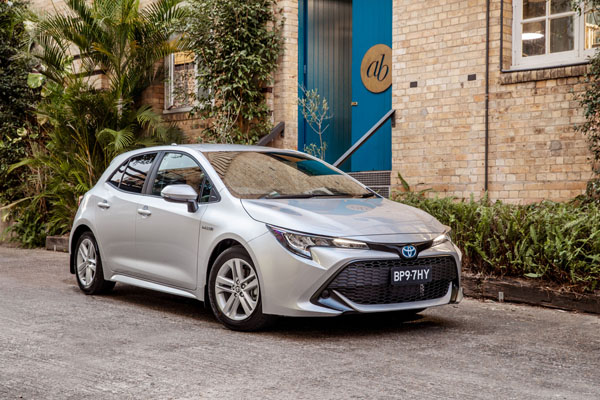 If ever there was a car that needed no introduction then it’s the Toyota Corolla. In production continuously since 1966, and with sales in excess of 44 million, it is the biggest selling car of all time.

In mid-2016 Toyota added a petrol / electric hybrid variant to the Australian Corolla range for the first time.

The Japanese giant was one of the pioneers of volume production vehicles using this fuel-saving technology with its Prius hatchback which arrived here in 2001.

The original Corolla Hybrid only came in the base grade format but now, as part of the MY2018 upgrade, it is available in the same three variants as the rest of the range: Ascent Sport, SX and ZR.

STYLING
Apart from a ‘hybrid’ badge at the rear there is no visual difference between Corolla Hybrid and the rest of the range. Which makes sense because to our eyes this is the best-looking Corolla yet.

It’s longer, lower and wider than before with a more coupe-like silhouette which combine to give a much bolder stronger road presence. 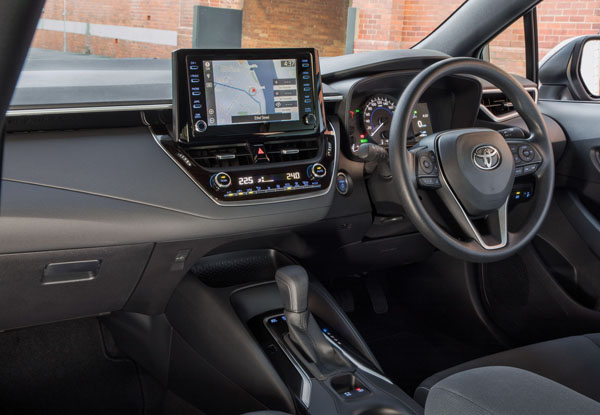 Ascent Sport and SX have 16-inch alloy wheels with ZR jumping up to 18-inch. All have a temporary spare wheel.

The interior is neat and tidy with everything in the right place. Seats are wide, comfortable and supportive. Headroom is fine in the front seats but marginal for taller rear seat passengers. There’s no sunroof option which would otherwise reduce space.

ENGINE / TRANSMISSION
Corolla Hybrid comes with the same powertrain as the current Prius. Called the Hybrid Synergy Drive it uses a 1.8-litre four-cylinder Atkinson Cycle petrol engine supported by a nickel-metal hydride battery to put out a maximum 90 kW of power and 207 Nm of torque. Fuel consumption is listed at 4.2 litres per 100 kilometres.

The batteries for the electric motor can be charged by the petrol engine when it no longer needs full power to drive the vehicle and also by the braking system that takes the energy from the car as it slows down or goes downhill. This is probably the biggest attribute of a hybrid vehicle in the real world.

The Toyota CVT has seven preset overrides via the gear shift lever with the SX and ZR also getting steering wheel shift paddles. There are three driving modes: ECO, Normal and Sport.

SX and ZR add a blind spot monitor and satellite navigation with ZR also getting a colour head-up display.

INFOTAINMENT
All models get a centrally-mounted 8-inch touchscreen operated either through large buttons or voice recognition. A new feature called Miracast allows smartphone screens to be duplicated onto the touchscreen.

Ascent Sport and SX get six-speaker audio, ZR steps up to an eight-speaker JBL premium system. Satellite navigation with SUNA live traffic is standard on SX and ZR.

At this stage neither Apple CarPlay nor Android Auto are available but can be expected with the next upgrade.

DRIVING
The more we drive SUVs the more we appreciate being able to enter cars without scraping our ageing heads on the top of the door opening so we found the low stance a bit annoying. Once settled in though the seats are comfortable and supportive.

The MY2018 Corolla comes from the new modular global architecture that’s gradually being used across many of the Toyota ranges. It increases body rigidity by 60 per cent, lower centre of gravity and multi-link rear suspension this is finally a Corolla that can be really fun to drive. This is increasingly important for Toyota in its ongoing battle with Mazda3 and Hyundai i30.

The dominant feature of hybrid vehicles is fuel efficiency but the benefit of battery power is that it also provides extra low-rev torque for faster take-off. Alternatively, with some light pedal pressure, you can traverse your local supermarket carpark in silence, being on the alert for unobservant pedestrians.

There’s excellent vision all round and sharp acceleration for safe urban manoeuvring.

On the open road new Corolla feels like a car the next size up, which it effectively is. It cruised through the hilly motorway segment of our test route without any stress and with little of the hunting that can plague CVTs thanks to the inclusion of a torque converter. Steering is nicely weighted and responsive with safe and dependable cornering.

Although it’s far from being a performance car there is a sportier feel to the latest Corolla than in previous models.

SUMMING UP
Corolla Hybrid offers excellent value with prices ranging from $25,870 to $31,870 or just $1500 above those of the equivalent petrol-only models.

For these prices you get a great looking small car with a large range of both safety and convenience features. And one that’s now fun to drive.

Toyota continues to buck the increasing warranty trend by sticking to the old standard of three years / 100,000 kilometres.