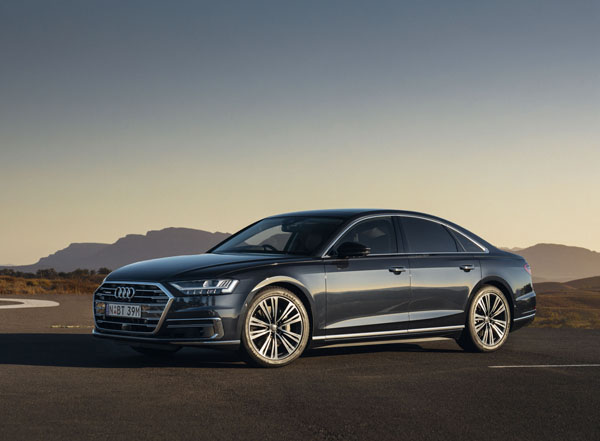 The all-new fourth-generation of the Audi A8 flagship is now on sale in Australia. It’s a large sedan – or should that be saloon? The German machine has handsome lines that give it a real presence on the road as evidenced by the number of people who looked it over while we drove it out of Sydney on the launch program.

We use the word handsome as it has relatively conservative lines – as is the norm in any of the topline German prestige machines. No flashy lines because these might just put off potential owners who are more likely to be on the high side of 60 than below it.

The front has the latest iteration of the Audi grille that has been so successful for more than a decade. It’s wider and deeper than ever before and certainly makes a statement. Much of the rest of the frontal area is taken up with large LED lights and the overall frontal effect is very much one of automotive purpose.

Wheelarches are large to cope with the high-performance rubber they contain, the sides have relatively subtle swages and the rear features the latest Audi design theme of slim full-width lights. 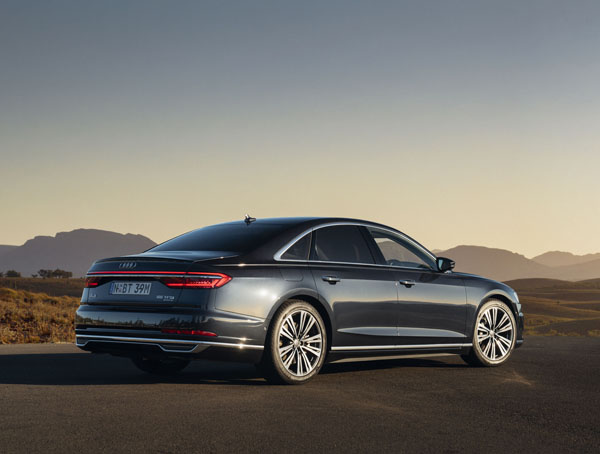 New Audi nomenclature sees the models called A 55 TFSI as petrols and A 50 TDI as diesels.

Both engines are 3.0-litre V6 units (thought the diesel is a tiny bit smaller than the petrol) and power all four wheels using Audi’s highly regarded quattro all-wheel-drive system.

A mild hybrid system is used to recover energy when slowing, braking, or coasting downhill and reuse it to get back to speed and / or climb hills again. Our Driving impressions are given later in this report.

The interior is very upmarket, with high quality materials throughout. Audi cabin designs have been the envy of others for many years, some have attempted to follow the style, but without any real success. 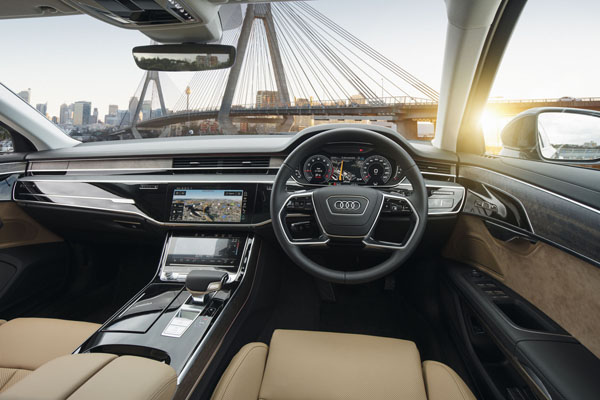 The dash of the all-new A8 is a model of simplicity. The main instruments are shrouded in a simple, but sporty, binnacle and are large and easy to read. Audi’s Visual Cockpit lets you choose the view in the binnacle. The remainder of the dash is a wide and uncluttered in a minimalistic approach that we really like. The ventilation outlets are hidden until the ignition is turned on.

Dual touchscreen panels (10.1- and 8.6-inch) sit below the centre of the dash and give access to just about every form or information or entertainment you could ever hope for.

DRIVING
The front seats are large and comfortable and can be adjusted in a mind-bending number of ways. In the rear there is either a three-seat layout, with a definite emphasis on the two outer seats, or two wide seats with a large centre armrest.

Having spent six hours driving in three different Audi A8 saloons it comes as no surprise that the flagship has been named the ‘World Luxury Car of the Year 2018’.

The relaxed, peaceful feel is wonderful inside the big saloon is great and we really enjoyed a cruise out of East Sydney, south through the Royal National Park, then the coast road south to Wollongong and beyond. Followed by a climb up to the Bowral area for lunch and finally a boring home trip up the motorway to Sydney airport.

‘Boring’ because of the soporific 110 km/h speed limit we seem stuck with in Australia. This car really has been created for the 130 km/h speed limits in Europe which are more engaging and less tiring on the driver.

Winding roads are not really the strong point of any two-tonne car but the big Audi handled them with ease and felt smaller and lighter than it is – always a good sign of suspension engineering.

Rough roads were handled with ease but there were times when sound levels increased quite a bit. We’ve noticed this before in quite a few late model cars, possibly it’s a physiological thing after the near silence on smooth surfaces.

Both engines have plenty of torque, fast response and the ability to cover miles in near silence while ticking over at speeds usually below 1500 rpm to minimise fuel use.

My favourite car was the chauffeur driven (thanks, fellow journo Phil) ride in the left-rear seat with heaps of room in the LWB Audi – and the optional foot massager (yes!) soothing me.

SUMMING UP
Audi’s latest luxury sedans are masterpieces of modern technology clothed in bodies that are just right in style or their upmarket class.