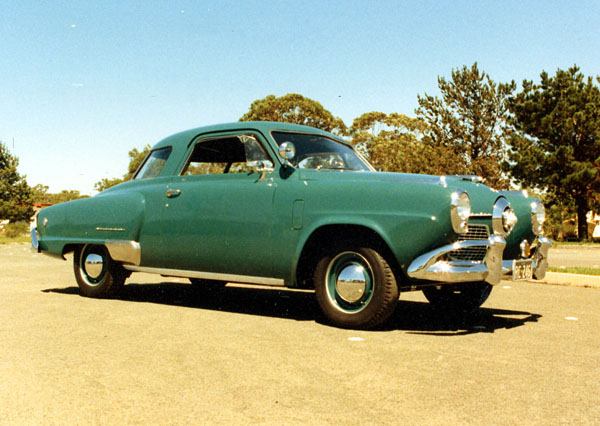 The Studebaker brothers commenced making wagons in Indiana, USA in 1852 and by 1875 the firm of Studebaker Brothers Manufacturing Co had the largest vehicle works in the world. These wagons had done much to open up the West and had seen service in the Civil, Spanish-American, Boer and First World Wars. Wagon manufacture was discontinued by 1921.

Automobile manufacture did not start until 1902 when Studebaker commenced making electric cars. By 1904 they were producing two- and four-cylinder petrol-engined cars. For a period they designed cars which were produced for them, then in 1913 the company launched its own four- and six-cylinder models which were extremely successful. The business continued to expand through the 1920s and the President straight-eight model of 1931 was equal in many respects to the luxurious Pierce-Arrow, acquired by Studebaker in 1928.

In the 1930s Studebaker got into financial difficulties following some bad business decisions and the company president, Albert Erskine, committed suicide in July 1933, two months after Studebaker went into what was to be a two-year receivership. After World War II Studebaker was first off the mark with Raymond Loewy’s revolutionary ‘coming or going’ style, featuring a short bonnet and long boot: the Champion. This one went on sale midway through 1946 and continued for three years without significant change.

All the Champion’s seats were firmly within the wheelbase. The little 2.8-litre six was a real fuel miser, using only 12 litres per 100 kilometres with gentle driving which went up to only 13.5 litres at a steady 100 km/h. In 1949 268,000 cars were sold. In spite of this success little effort was made to invest in product improvements and the introduction of a Commander coupe‚ followed by a Starliner coupe, both of which had production and quality problems, took the company further into debt. Studebaker then went through further difficult times finally having to merge with Packard to stay viable. This was unfortunate for, to save the company, design was nearing completion of a totally new car which was to have an all-independent suspension and a V6 engine designed especially by Porsche.

As a stopgap measure the Starliner was restyled and renamed the Hawk for 1956. It was offered with a range of engines from the small six-cylinder of the Champion to a Packard V8. Studebaker bravely tried to introduce technical novelties and attractively styled cars such as the Lark, but the more conventional cars from competitors always seemed to outsell them. Car production ceased in 1966.