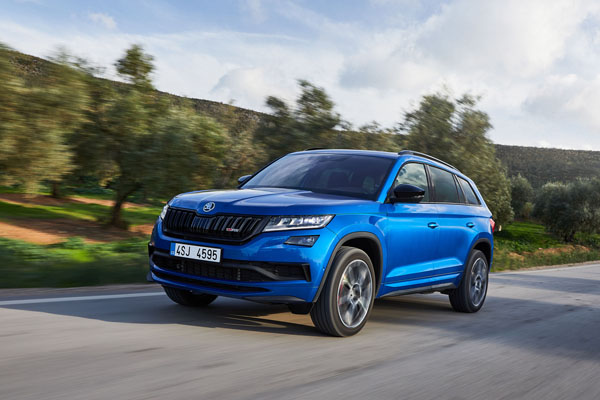 STYLING
Kodiaq’s sporty RS model has a body kit to give it a low-ish appearance that looks good on the road or in the carpark. It rides on 20-inch ‘Xtreme’ alloy wheels accented by red brake calipers, blacked-out mirrors, roof rails and grille with RS badging.

INTERIOR
The interior has Alcantara leather appointed upholstery, LED interior lighting with decorative strips on the doors, two tablet holders and a three-spoke multi-functional flat-bottom leather steering wheel with control for radio and phone. There are RS logos stitched in the front seat headrests.

The virtually all black interior is rather depressing to sit in, though the thin red trim in the seats does lift it a bit.

There are many clever features of the sort in which Czech engineers have a long history, including adjustable second row seating for easy entry of third row passengers.

Kodiaq’s rear seats can be folded in the ratio 60:40, and can be moved back and forwards.The angle of the backrests are individually adjustable.

With a volume of 270 to 2,065 litres (with the rear seats folded down), the Skoda Kodiaq has the largest boot in its class.

There’s an integrated LED torch in the luggage compartment, a net system in the cargo area. Umbrellas in the front driver and passenger doors.

Then there are the clever pop-out plastic protectors on the doors the stop damage to the Skoda and other vehicles parked alongside. Every vehicle should have these…

ENGINES / TRANSMISSIONS
The first Skoda SUV to bear the RS name, the Kodiaq RS is powered by a 176 kW/500Nm 2.0-litre bi-turbo diesel engine.

It’s capable of zero to 100km/h in seven seconds. Keep in mind that this is seven seater SUV, not a hot sedan, which makes it pretty impressive.

Drive is though a seven-speed DSG automatic. There’s all-wheel drive in this model. It works intelligently and quickly by constantly calculating the ideal driving torque for the rear axle. Loss of traction is virtually eliminated due to a control system that is dependent on driving status. When in overrun or at low load, drive is via the front axle only, which saves fuel.

The Surround Area View system includes a virtual, top-down view and 180-degree images of the areas to the front and rear. This makes it easier to drive in confusing situations, particularly in off-road terrain. 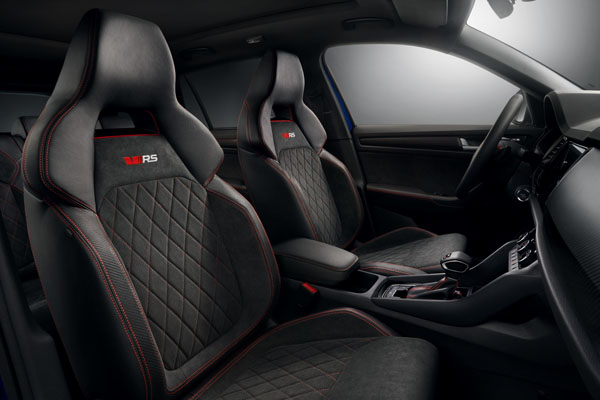 DRIVING
Before we get onto our driving impressions on the Skoda Kodiaq let’s start with a hot drive in Germany. In 2018, famed race driver Sabine Schmidt, lapped the world famous Nordschleife in a Kodiaq RS, setting a new seven-seat SUV record of 9 minutes 29.84 seconds.

Okay, we didn’t do that sort of driving during our week on the Gold Coast with ‘our’ Skoda Kodiaq. The steering isn’t too bad, but not as sporty was we would like in an ‘RS’. It reacts reasonably well and gives good feedback.

The diesel is rather old fashioned and quite noisy. There’s isn’t too much lag and it goes really hard once it’s on song. It’s pretty economical and we got consumption down to just six litres per hundred kilometres on motorway driving. Running around town it was seldom higher than nine litres per hundred.

You can change gears in the automatic Drive and Sport modes or take control manually using the gear lever or the steering wheel paddles.

Handling is pretty good for a largish SUV as the RS suspension is biased more towards handling than others in the Kodiaq range. It answers quickly to steering wheel movements and isn’t fussed when you need to change angles mid corner. Having said that it’s no sports machine in the way it handles due to it relatively high centre of gravity.

Off-road mode is selected by a button. The chassis, engine management and brakes adjust their operation specifically to rough terrain. This involves accelerating, traction and deceleration. In off-road mode, Hill Descent Assist operates on rough terrain by braking appropriately.

However, Kodiaq RS has rather low corners at the front road as part of its sporty appearance and these are likely to suffer on anything other than mild off-road driving. Anything more than harsh bush tracks should probably be avoided.

Skoda’s instrument panel can be set up in various ways. Our favourite is the Sport one with a central tacho taking precedence over everything else.

SUMMING UP
Skoda Kodiaq is a reasonably sophisticated SUV that is moderately priced, well built and has a seven-seat body with comfort for six adults, three at a squeeze. Though the Skoda name still isn’t really known to the general public it should be and the Kodiaq should help in this respect.

Note: These prices do not include government or dealer delivery charges. Contact your local Skoda dealer for drive-away prices.