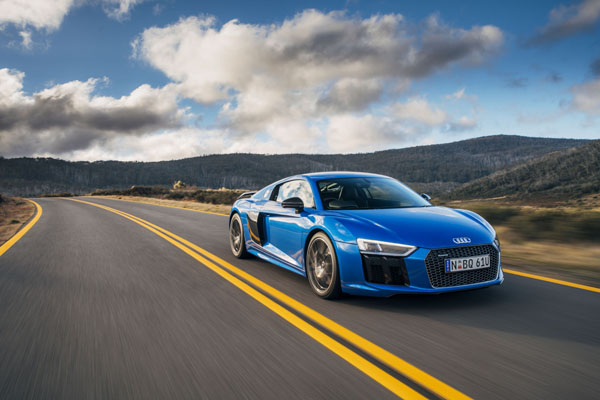 Visually, you can easily tell the two apart. From the front the Plus’ big grille is a glossy black. There’s a huge, DTM-inspired carbon fibre wing on the back, replacing the Coupe’s electric-lift wing that pops up at 120 km/h.

The bigger differences are under the skin. Both run the same 5.2 litre V10 FSI paired with a seven-speed dual-clutch transmission. The Coupe has a stout 397 kW with the Plus adding 52 kW for a grand total of 449 kW.

The Plus also has different gear ratios from gears three to seven, the first two shorter to increase punch, the top two longer to eke out an extra 10km/h top speed (330 km/h, if you’re game).

The new car is shorter, wider and lighter. That last figure, 1454 kg, is partly down to the new Audi spaceframe, a mix of aluminium and carbon fibre reinforced polymer.

The V10 Plus has stiffer springs and dampers and mighty set of carbon reinforced ceramic discs measuring 380 mm up front, gripped by six-pot calipers, the 356 mm rears by four-pot grabbers. These brakes replace the crinkle cut steels of the Coupe, which are only marginally smaller.

Both cars feature the same double wishbones front and rear, with the base model Coupe running magnetic ride control. Both also roll on a range of 19-inch alloys or optional (some no-cost) 20-inch alloys. It’s almost impossible to tell the difference in the ride between the wheel sizes, but the sticky P-Zeros on the 20-inch rims are detectable when you’re really leaning on it. 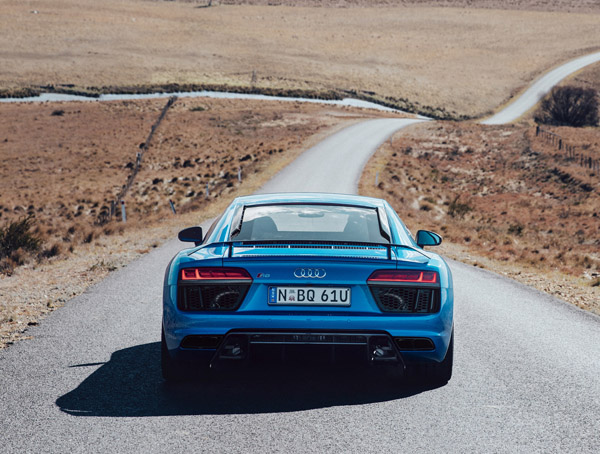 The R8’s interior is cool, clear and calm. The dash appears to float in the air and gives the cabin an airier, roomier feel. There really is more room in the cockpit, too. The driving position is also just right, with everything in a straight line.
The new Audi R8 goes without the older car’s manual option, with a set of paddles attached to the flat-bottomed steering wheel.

The Coupe has two buttons on the wheel, one to start the engine, the other to choose between driving modes. Comfort keeps things quiet while Dynamic amps things up considerably, including opening up the exhaust to let out the V10’s glorious racket.

Audi R8 Plus gains the Performance dial, three more modes over and above Dynamic – Snow, Wet and Dry. Last but not least is a separate control for the exhaust, letting you float along in Comfort mode while crackling and popping as you lift off for that red light up ahead.

Our launch route took us through a terrific variety of rural roads in the NSW Snowy Mountains. Long, fast sweeping corners are easily dispatched in the V10 Plus and it’s a very convincing GT car. The Plus’ stiffer springs and dampers still manage a level of comfort its Italian cousin could only dream about while a mite more clearance means fewer scrapey moments.

The only fault we could find on these roads was a propensity for a hefty, metallic clunk to issue from the front wheels when skipping through one of the many divots in the road. 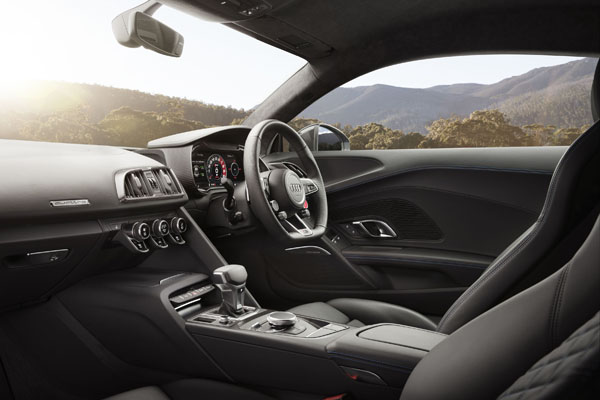 As we climbed higher, a sudden heavy shower soaked the road – the R8 took it in its stride, the quattro all-wheel drive keeping the car firmly planted. Some supercars can get pretty nervous in this kind of situation – wide tyres on any car will do that – but the new system shuffled the power around and kept things straight, narrow and fuss-free.

On the other side of the mountain, the road opened up again, dried out and we were able to resume hostilities. Running downhill is always a fantastic test of brakes, specifically their ability to keep your faith and confidence in them. The carbon discs have excellent feel and don’t need a series of hard stops to get them working properly. They’re easy to modulate, too, with finely judged travel and assistance.

For once this particular road had a sensible speed limit and we were able to properly open the taps on the R8’s 5.2 litres and spend some quality time at its 8700 rpm redline.

The V10 spins like a motorbike motorbike engine, careening to the redline with glee, the fully digital virtual cockpit instruments madly flashing red at you to shift up. There aren’t any turbos to rob the engine of revs or noise. That noise is best enjoyed on roads like these, hugging sandstone cliffs allowing all those revs to come back in through the windows.

Those roads also tend to have plenty of tight, tricky bends in them, not built with a low-slung V10 sportscar in mind. Our first Australian experience of the R8 had been on the track at Sydney Motorsport Park and while that was a whole lot of fun, it’s a predictable experience that can mask a car’s faults as you learn to drive around them. Even if the faults are hard to find.
Out on these roads, a car is a wide open book. If it’s got any vices, you’ll find them as you bounce over bumps caused by tree roots. An off camber corner will test its grip and steering as you manhandle the chassis over its dodgy crown, the gravel pinging off the underbody after trying to separate the rubber from the firm bits of the tarmac.

The R8 turns out to be almost vice-free. Despite its all-wheel drive, you can still trim the line with with a lift or push of the throttle depending on what you want. Most of the time it feels very rear-wheel drive, until of course you try and get all 449 kW to the road in a hurry.

There were promises that the new quattro system kills understeer, but it is still there, particularly when you pin the throttle. It’s manageable and predictable and not of the sort that will see you unexpectedly kissing the Armco, more a bit of built-in safety to remind you what you’re up to.

The steering is sharp and light – that second attribute will cause some drivers a little heartache but it also means that the vast majority of the time when the car is used as a tool rather than a weapon, it won’t tire you out.

Audi’s new R8 is probably the most low-key supercar you can buy – it doesn’t have the exuberance of the Huracan, the rear-engined cliche of the Porsche 911 Turbo or the manic charisma of the Ferrari 488. It’s bristling with technology that all just works letting you get on with the thing it’s built for – driving.