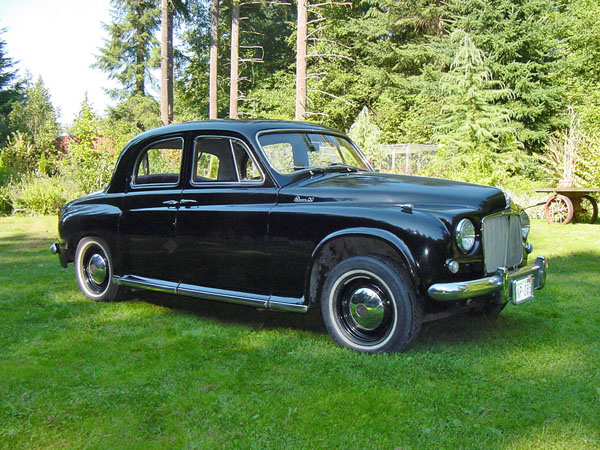 Rover’s Managing Director in the 1930s, Spencer Wilks, was determined to produce cars
of high quality and refinement with a measure of dignity. He had no interest in building
high performance vehicles. For some years prior to the arrival of Wilks, Rover’s approach
to building cars had been along these same lines and Wilks ensured that they continued in
this manner.

The P4 was part of a design philosophy commenced by Wilks’ predecessors but it had a
more modern look and also incorporated mechanical improvements developed by Rover
engineers.

The P4 was a four-door sedan with its body mounted on a separate, solid chassis. Up front
a 2.2-litre 56kW straight-six engine with overhead inlet valves and side-exhaust valves
drove the rear wheels in a very sedate manner. Fuel was supplied through two horizontal
SU carburettors.

The body was designed for comfort and safety and fitted out inside with wood panelling,
leather seating and woollen pile carpets on the floor. Independent front suspension with a
beam-axle rear ensured a smooth ride.

It was Rover’s intention that the P4 should remain in production for a number of years. As
changes and improvements were made, they were sensible ones that were made
gradually. It did, in fact, remain in production from 1949 right through to 1964. During that
time the main changes were to the engine and transmission.

Over the model life the six-cylinder had at least four upgrades in peak power output and,
for a period, various four-cylinder engines were also available. These engines plus the
choice of freewheel, overdrive or automatic transmissions meant that customers were
spoilt for choice.