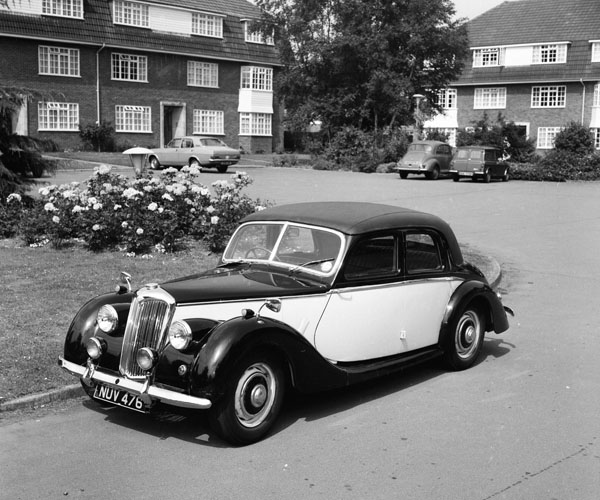 Although this story is about the RM series of Rileys which did not appear until 1945, the real heyday for Riley cars was in the 1920s and 1930s when the company made its reputation with a series of well-built saloons and small sports cars which were true thoroughbreds of their time. With these cars the Riley company, which was founded in 1898, built up a strong racing record but, by the late 1930s, finances were looking shaky and the Nuffield organisation took the company over in 1938.

Even under the new ownership these post-war cars managed to retain their individuality. Both RMA and RMB models had a classic high-cam four-cylinder engine, torsion-bar independent front suspension and elegant fabric-topped, timber-framed, steel-bodywork bodies.

The 1.5-litre RMB had a 120 km/h top speed and the 2.5-litre RMB with its 67 kW engine had a even higher top speed of 152 km/h and was capable of cruising effortlessly at 136 km/h. The RMBs had the longest stroke of any post-war English production car and excellent torque. They handled well, though they suffered from heavy steering at low speeds – a source of frequent criticism.

The ultimate and most desirable RM variant was the RMC which was an open three-seater roadster with rather sweeping, rakish lines. The fact that it had a column gear change showed that it was actually built to capture American sales. A fold down windscreen and lowered bonnet line were other characteristics of this model, of which 507 were built, plus a further 502 of the four-seater drophead RMD with its more conventional lines.

Last of the RM line were the 1952 RME with a 1496 cc engine and the RMF with a 2433 cc engine. Both models featured full hydraulic brakes, a hypoid back axle and bigger rear windows. For the run-out 1954 model year the styling of the RME underwent some subtle changes. Running boards were removed and streamlined headlight pods and rear wheel spats added.

At that time the flagship RMF had been replaced by the Pathfinder, which had nothing but a traditional four-cylinder Riley engine to recommend it. After the death of the RME in 1955 there were no more thoroughbred Rileys. Instead the famous Riley badge was progressively debased on a succession of BMC saloons until the end of the 1960s.