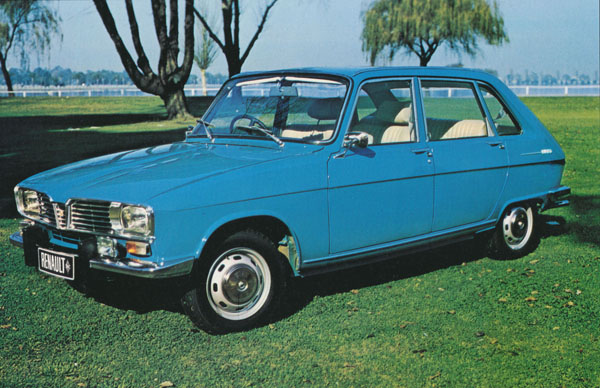 The Renault 16 was built to a formula. It had a body of estate-car type, front wheel drive to concentrate large mechanical units away from the load carrying area and trailing arm independent rear suspension to encroach as little as possible on the low floor level which is possible with such a design. Flexibility was the keynote of the interior layout.

Possible arrangements of the seating were astonishingly varied, thanks to a rear seat squab and cushion that could be moved, together or separately, into a variety of positions or removed with little trouble. Together with reclining front seats, the result gave seven different conditions for various purposes – including normal saloon usage, two-up travel with extra luggage space, sleeping and conveyance of exceptional loads.
With all this it remained a compact car.

Particular attention had been paid to the suppression of wind and road noise, to provide easy main road and motorway cruising at high speeds and to heating and ventilation; the cooling system was sealed and there were no greasing points.

Front wheel drive cars, particularly those with such a high load capacity, presented problems due to the great variation of weight on the rear wheels. In common with other designs, the Renault had special arrangements for varying the rear brake effort in sympathy. The headlamps, too, were instantly adjustable for load. Other interesting design trends were found in the light alloy 1.5-litre engine and in the unusual suspension details.

The engine was completely new. It bore some superficial resemblance to the smaller R8 unit in having a five-bearing crankshaft and in retaining an undersquare bore/stroke ratio – the installation made overall length more important than height. The pressure die-cast aluminium block with wet liners was a Renault innovation: cooling water surrounded the top halves of the cast steel liners only, the lower parts being a push-fit in the aluminium housing.

The camshaft, driven by a double roller chain, was mounted unusually high – in fact it fitted in a trough running along the top face of the block. There was no attempt at all to produce a high output from this engine. The compression ratio, a moderate 8.5 to 1, and a single Solex 35mm carburettor (with manual choke) fed the water hot-spotted two-port inlet manifold. It gave 44kW at 5,000rpm, not remarkable for a 1.5-litre, but the power/weight ratio was outstanding. Also notable was that the cylinder block weighed less than the crankshaft!

The engine was mounted on rubber at three points and like the R8, it had a pressure die cast casing in two halves. The cable-operated clutch was a Ferodo unit of 200mm diameter with a hypoid crown wheel and pinion driving the front wheels through half-shafts fitted with constant velocity joints.

Independent suspension by four torsion bars appeared straightforward but had several interesting subtleties, some of them because the car was designed right from the start to use radial tyres. The body was a monocoque shell with a pressed steel platform.

Three concepts received special attention: a good aero-dynamic shape for performance and economy; maximum adaptability to the seating/luggage requirements of users; and ventilation and heating without draughts or noise.

Despite its individualistic body styling, the R16 proved a popular car with its owners.