RENAULT KOLEOS IS A NEAT AND CAPABLE MID-SIZED SUV 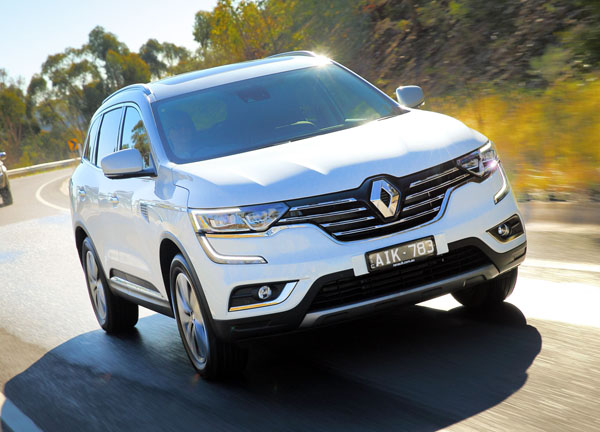 Renault Koleos is the larger of two SUVs in the French carmaker’s Australian range, the other being the compact Captur.

Koleos has been on sale here since 2008 without causing much of a ripple on the sales charts but with hopes that the recent arrival of the second-generation model and some decent marketing will attract more interest.

Truly cosmopolitan, Koleos was designed in France, has a Japanese-built chassis and is constructed in South Korea. Australia becoming the first country, outside of its native France, to sell it.

STYLING
Koleos is a big, bold vehicle that’s built on the same platform as the well-established Nissan X-Trail. The front features an almost vertical grille with chromed strips that run from the headlights along the full length of the guards and all the way back to the ‘gills’ in the front guards. The centre of the grille features a large Renault diamond with another diamond at the rear between horizontal taillights.

Three variants are offered. In ascended order of equipment level and price they are the quirkily named Life, Zen and Intens. The entry-level Life comes only with two-wheel drive; mid-spec Zen also has the option of all-wheel drive; while the range-topping Intens is only AWD.

Koleos Life rides on 17-inch alloy wheels, Zen and Intens each get a different design of 18-inch alloys. 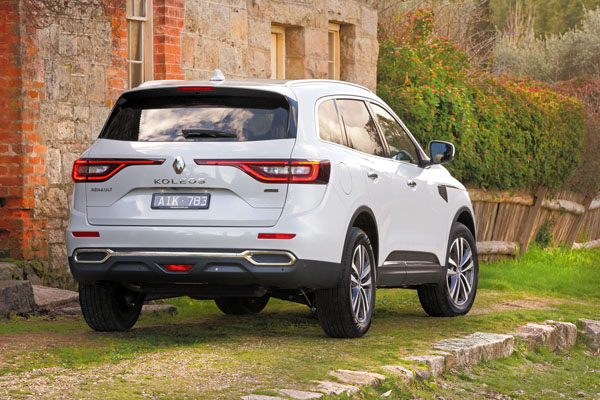 ENGINE / TRANSMISSION
There’s just one powertrain, 2.5-litre four-cylinder naturally-aspirated petrol engine that generates 126 kW at 6000 revs, and 226 Nm of torque at 4400 rpm. Transmission is by a continuously variable unit.

A turbo-diesel engine is expected to be added to the range later in 2017.

INTERIOR
Entry and exit is comfortable without any excessive ducking down. There’s sufficient leg, knee and headroom for three adults to travel in the back seat comfort. With two rear passengers the central armrest can be folded to provide two inbuilt drink containers.

Intens has an automatic bootlid opening via the key fob and and can be closed either the same way or with a button on the bottom of the lid. The opening height can be reduced if needed. 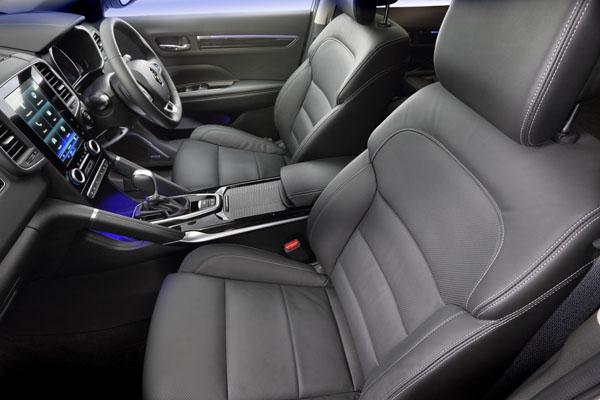 INFOTAINMENT
Koleos gets Renault’s latest R-Link 2 system for its infotainment technology. The premium Intens model displays onto an 8.7-inch tablet-style touchscreen with the Life and Zen getting a 7.0-inch portrait screen

We felt that too many of the controls operate through the touchscreen including air conditioning temperature and fan speed adjustment. This requires too much attention to be diverted from the road, which is potentially dangerous.

There are USB ports both in the front console and the rear armrest. Bluetooth pairing is logical and quick.

Surprisingly in these tech-conscious times neither Apple CarPlay nor Android Auto are available in any Koleos model.

Life and Zen get an eight-speaker Arkamys sound system; Intens steps up to 12-speaker a Bose surround-sound system with 12 speakers, subwoofer and digital amplifier.

DRIVING
Life has a key in ignition start/stop, Zen and Intens push button.

The front seats are large, supportive and comfortable with the extra ground clearance (210 mm) in the AWD Intens providing a higher driving position and so better outward visibility.

Our test was in the Koleos Intens and took in our usual mix of urban, motorway and rural conditions with an off-road diversion to see how the AWD coped.

School holidays meant that our slog through Sydney’s congested roads was a little easier than normal and this combined with the high driving position and good all-round visibility meant that we escaped the city in a far more relaxed mood.

The motorway is the natural habitat of the new breed of largish SUVs and Koleos showed that it could cruise comfortable despite its fairly modest engine capacity and outputs. Peak torque at 4400 rpm is relatively high in a class which is increasingly using turbo power. However, our test runs showed good pulling power from about 2000 revs with the added benefit of having no turbo lag.

Once into the Central Coast hinterland road handling is fine, although the balance in the inevitable clash between comfort and handling is on the former. Again though, that the case with most vehicles in this class.

Off-road Koleos had no trouble traversing some bumpy and corrugated dirt backroads with help from the 210 mm ground clearance. We’d be wary of trying anything too serious because the approach and departure angles are fairly shallow but most if its rivals are in the same situation.

Fuel consumption is listed at 8.3 litres per 100 kilometres from the 4WD models (8.1 L/100km in the 2WD). We averaged in the high nines during our week in the Intens, reasonably good for a large 4WD wagon.

SUMMING UP
Renault Koleos is a handsome mid-sized crossover SUV with excellent comfort and interior space. Pricing is competitive, as it needs to be in its booming market segment, with an eye-catching $29,990 tag for the base model.

Despite its previous low profile in the market this second generation Renault Koleos is certainly worth adding to any potential buyers shopping list.

Renault is one of the growing number of car companies that have moved above the three-year / 100,000 km warranty limit, providing five years with unlimited kilometres.