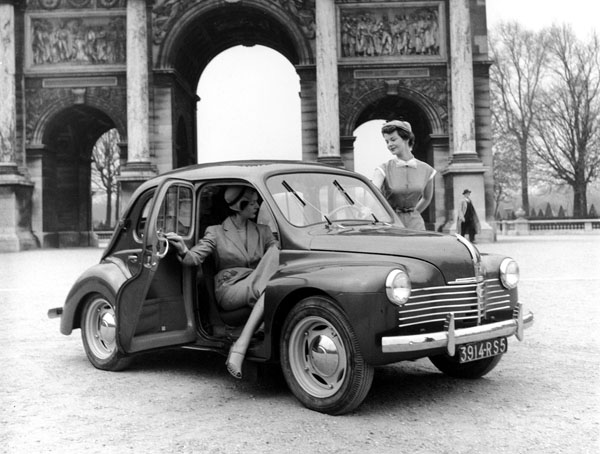 Through many trials and tribulation, Louis Renault became the leading French car manufacturer, triumphing over Andre Citroen during the 1920s. As early as 1900, Renaults had adopted a sloping coal scuttle bonnet which became a distinguishing mark of the company’s products.

The engines ranged from a 1.1-litre two-cylinder through a quartet of fours of 2.1 to 7.4 litres, followed in 1908 by a 9.5-litre six. Except for the taxi-orientated twins, the emphasis was on prestige until World War I.

Renaults of the 1930s gained in sales but lost distinction both mechanically and visually. Radiators were moved to the front, behind grilles imitative of those on contemporary Buicks and Chryslers. All the bodies were roomy for their respective price classes. In 1931 full sized models included a 2.4-litre four, a 3.2-litre six, and two straight-eights, the 4.2-litre Nervastella and the 7.1-litre Reinastella. The latter replaced the 45 but lacked its panache.

During the Depression decade, Renault also made small cars. The last of these was the I.0-litre Juvaquatre four of 1937-40, a four-seater, four-door saloon resembling a scaled down 1936 Ford. A slightly revised version was the newly nationalised firm’s only passenger car just after World War II.

It was succeeded in 1947 by the ingenious 4CV, a car just right for its time. This 760 cc four had been developed in secret during the war; then, before the design was made final, a distinguished prisoner named Ferdinand Porsche was co-opted as a consultant.

Like his Volkswagen, the 4CV was a rear-engined four, developing 14 kW at 4000 rpm but was liquid cooled. Among its features were replaceable cylinder liners, independent suspension all around with swing axles at the rear, a unitary body, an aluminium cylinder head, and hydraulic brakes. Fuel consumption was better than 7.0 litres per 100 km and it carried four in comfort to its maximum speed of 96 km/h.

Its modern lines were favourably commented on but a number of potential buyers thought it too small. The rear engine also put off some buyers. Even so, orders flowed in. As well as France the car sold well in a number of other countries but Americans found it rather small for their likes. More than a million were sold before production was finally discontinued in 1961.