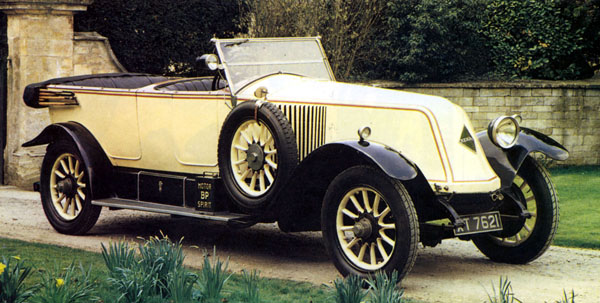 Also referred to as the model NN1, the Renault 40CV of 1924 was designed by Louis
Renault and replaced the Renault types KJ and MT.

It was powered by a large 9.1-litre straight-six engine mounted in the front of its extremely
long chassis and it drove the rear wheels through a three-speed manual transmission. This
engine developed 104 kW and drove the car to a top speed of 145 km/h.

The NN1 was produced from 1924 through to 1928 as the successor to the Renault KJ
and MT and it was replaced by the NN2, a larger and heavier car. In 1929 the NN2 was
discontinued after only 12 months as both the Renault Monasix and the Renault
Juvaquatre were ready and both were introduced in the same year.

The 40CV’s seemingly endless chassis was often used by leading coach builders to
produce a number of sumptuous two-door coupes and four-door landaulet sedans with a
very sophisticated finish.

Renault’s image was that of a manufacturer of popular cars and because of that their cars
were rarely sought out by a luxury clientele. However, cars such as the 40CV were a
match for the Rolls-Royce Silver Ghost or the Hispano Suiza H6 even though, in the case
of the 40CV, its design was beginning to appear a little dated.

It has been recorded that 150,000 of these cars were produced.