RAM 1500 IS ONE TOUGH PICKUP TRUCK 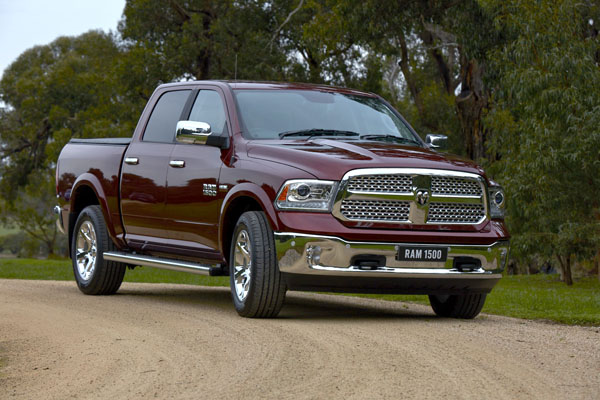 Priced from $79,990, driveaway the RAM 1500 sits a fair way above the late lamented Aussie utes, but you do get a lot of automotive real estate for your money. At 5.8 metres long and a little over two metres wide, the RAM 1500 is significantly larger than other utes. There is significantly more space inside and outside and a much larger towing capacity, at 4.5 tonnes.

This is a proper truck, built on a separate chassis, but with a sophisticated suspension system. The front independent suspension combines upper control arms and aluminium lower control arms. The rear has a multi-link, coil-spring setup.

Four-wheel disc brakes are standard on all Ram 1500 Truck models sold in Australia .

RAM 1500 is offered in two cab sizes, the Express with the Quad Cab, and the Laramie with the Crew Cab. Although the Quad is the smaller of the two it has impressive levels of shoulder and hip room. The Laramie has a full crew cab with 3.5 cubic metres of interior space with a rear seat legroom length of more than a metre, making it is as spacious in the back as the front. 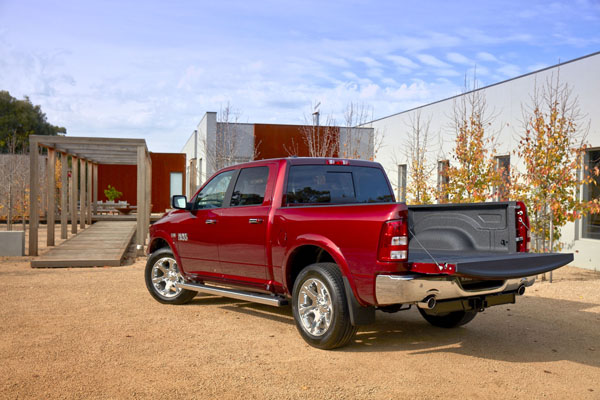 There are two tub sizes, with the largest almost two metres long and more than 1.2 metres wide between the wheel arches. RamBoxes, two 240 litre lockers on either side of the tub, can be used as secure storage or as a pair of ice-filled cool boxes.

The RAM 1500 Express has a colour-matched grille, bumpers and interior trim, making it a sort of sporty model. It can optioned with a Black Pack which turns everything to black.

RAM Laramie has a more traditional chrome grille as well as chromed highlights and is aimed at those looking for luxury. It has heated and cooled ventilated leather faced front seats, even a heated steering wheel. Then there’s deep pile carpeting.

Unfortunately, illness prevented us from getting to the Australian launch of the RAM 1500, but we have our names down for test vehicles and will get back you with road test reviews asap.

RAM TRUCK
RAM Truck was launched as a stand-alone division of Fiat Chrysler Automobiles (FCA) in 2009. The Ateco Group is the sole authorised importer and distributor of RAM trucks for Australia and New Zealand. The trucks are imported directly from the North American factory in left-hand drive and then remanufactured to right hand drive on a purpose-built production line in Melbourne.

RAM Trucks are produced with full volume import approval, meaning they are fully compliant with all Australian Design Rules. They are sold and supported by an Australia and New Zealand-wide dealer network.

“Our aim has always been that, so far as the customer is concerned, buying and owning a RAM, be it the new 1500 or its heavy-duty brothers, the 2500 and 3500, should be absolutely no different from buying any other mainstream vehicle,” says Alex Stewart, General Manager of RAM Trucks Australia.

“This means everything from production line quality and consistency of product, to a national dealer network, a factory supported warranty, through to back up of a full parts and accessory warehouses in Sydney and Auckland that can deliver parts to anywhere in the country within 24 hours.”